Who Is You? | The Fight Magazine 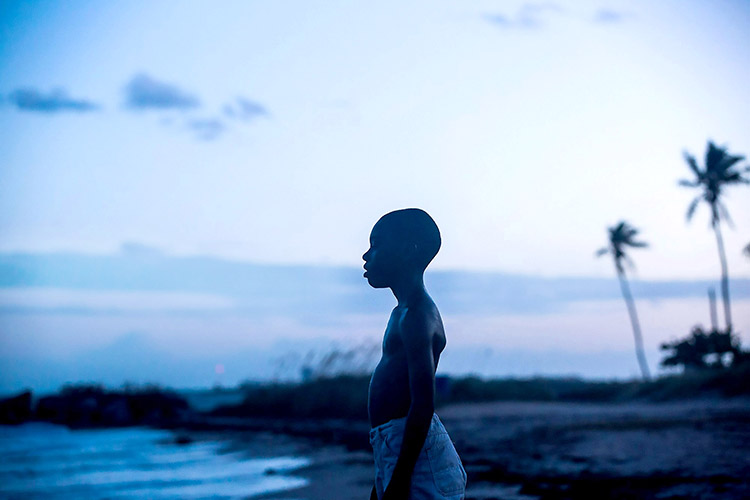 One of the things I loved most about Barry Jenkin’s exquisite film Moonlight, which came out earlier this month, was the ocean. As the young Chiron (named “Little” in the first chapter) learns to float on his back from Juan, a crack dealer who steps into Little’s life as a paternal figure, we are overcome by the serenity and massiveness that the sea provides.

The ocean returns throughout the movie, and I get the sense that it provides Chiron a sense of assurance, that perhaps it may not have the answers, but instead reminds us that we don’t always need them. From Moonlight we receive a poetic, visual, emotional journey through the aging of Chiron (played sequentially as “Little” by Alex Hibbert, “Chiron” by Ashton Sanders and as “Black” by Trevante Rhodes in three separate chapters). There is stunning visualization; the sea, the hand of Chiron’s friend Kevin gently wiping his presumably jizz-stained hand through the sand after a handjob, and of course the moon—bright and vibrant, but the language and imagery move together like a cohesive poem. Since we aren’t beat over the head with petty narrative details, identity is allowed to have the emotional complexity it deserves.

Jenkins repeatedly uses ambiguity as a story-telling device throughout the film (we don’t even really ever have an “I’m gay” moment with Chiron apart from his general outsiderness and physical attraction to Kevin) which is a stunning insight, I feel, into the ambiguity of sexual and racial identity itself.

The experience of race is also obviously an integral part of the film, and it’s refreshing to see race exist in a way that is transcendent; there are no white people in the movie (thank sweet Jesus), and it doesn’t become an issue of defining blackness as it compares to whiteness. There are pressing issues of violence, drug abuse and incarceration that give the film an overarching viewpoint beyond the individual experience of Chiron, which makes it both personal and social. But Moonlight isn’t about any one thing because empathy and identity aren’t about any one thing either.

In spite of heavy subject matter and grueling moments (Chiron’s mother Paula begging him for crack money, for instance), the film is not depressing or soul-crushing. At the risk of sounding basic, it’s just real.

Chiron is quiet, reserved, cautious and his pain comes from deep loneliness. He admits to an older Kevin, who has expressed regret for attacking Chiron at the behest of the school bullies, that since the beachside handjob, no one has touched him. In the next moment, we see them embraced, not pounding out some grand sexcapade or living the gay romance of the century, but simply holding one another, and there is a sense of ease as if, for just a moment, the question asked throughout the film has been answered. “Who is you?” And then, as a reminder that answers are fluid and ever-changing, we see a young Chiron looking over the ocean.