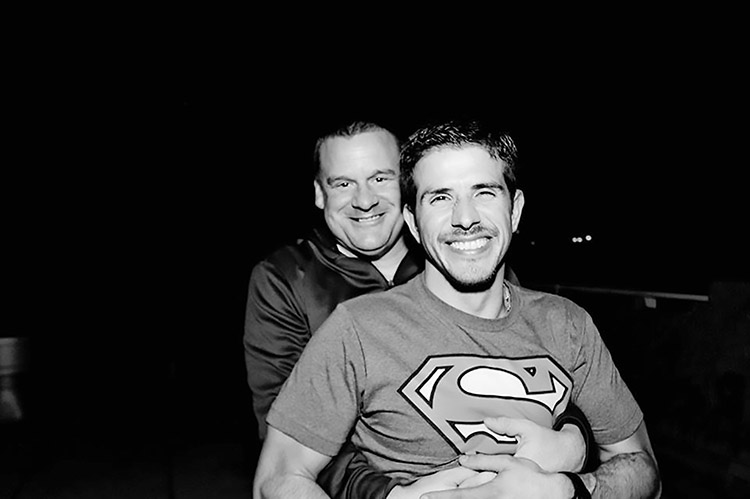 Douglas Lantis and Jose Gonzales, two sober men who found each other in the rooms of recovery, on how gratitude impacts their sobriety.

Gratitude is key for me in my recovery. I’m one of those people who still does a gratitude list every day. If I am not in gratitude, I can become such an ungrateful little so-and-so and I take what I have for granted. Being grateful is about wanting what I have. I also never thought I would find love again when I started this journey in sobriety this time. I never thought I could love myself again, let alone somebody else. I especially didn’t think I would meet somebody I would want to spend the rest of my life with—and—he’s sober also.

I remember when Jose walked into the rooms [of recovery] almost three years ago. The second I saw him, I was like, “oh wow…” I waited until he had a year, before I approached him romantically. Then the rest is history.

We’re going to be spending Thanksgiving together with his family, which is amazing. They have totally welcomed me with open arms and that’s sort of on the heels of me proposing to him. I proposed to him on one knee, on the beach at Laguna Beach. I had a ring and he freaked out and started to cry. I never thought that I would get married. I wouldn’t have any of this if I was not sober, or if I took it for granted.

I’ve never been sober this long before. I have an amazing life today and I know that picking up again is a decision to throw it all away. I’m not willing to pay the price that comes with picking up. I’m grateful for everything in my life. Gratitude did not exist before I got sober. I wanted to die. The only prayer I knew before sobriety was, ‘please let me die.’ Thank God that prayer was not answered.”

My gratitude list is long. I never imagined that one, I would be a college student, and two, that I would actually be engaged. My life today did not seem feasible three years ago. Today I’m very grateful I found love in sobriety. That is amazing to me. He and I are kind of on the same page in that I don’t think either one of us thought we would fall in love again, especially for me after my ex died four or five years ago of heart failure, which was probably due to his extended drug use.

I did not think love in sobriety was a possibility, but I was still open to it. Being engaged to another sober man really sweetens the deal. We both know where we come from. It’s a real blessing.

When Doug proposed to me, I had a suspicion that something was going on. He insisted on going to the beach and I didn’t understand why, but when he proposed it was still kind of a surprise. It was an immediate yes. There was no thinking about it.

My gratitude is indispensable. It has to be a part of my sobriety. If it is not, I lose sight of what I do have and the old behaviors of not appreciating my life kick in. Before I got sober, gratitude was non-existent. It was more about how I didn’t have what I wanted, or how I wanted it. Gratitude did not exist in my vocabulary. Today, not a day goes by where I’m not grateful.