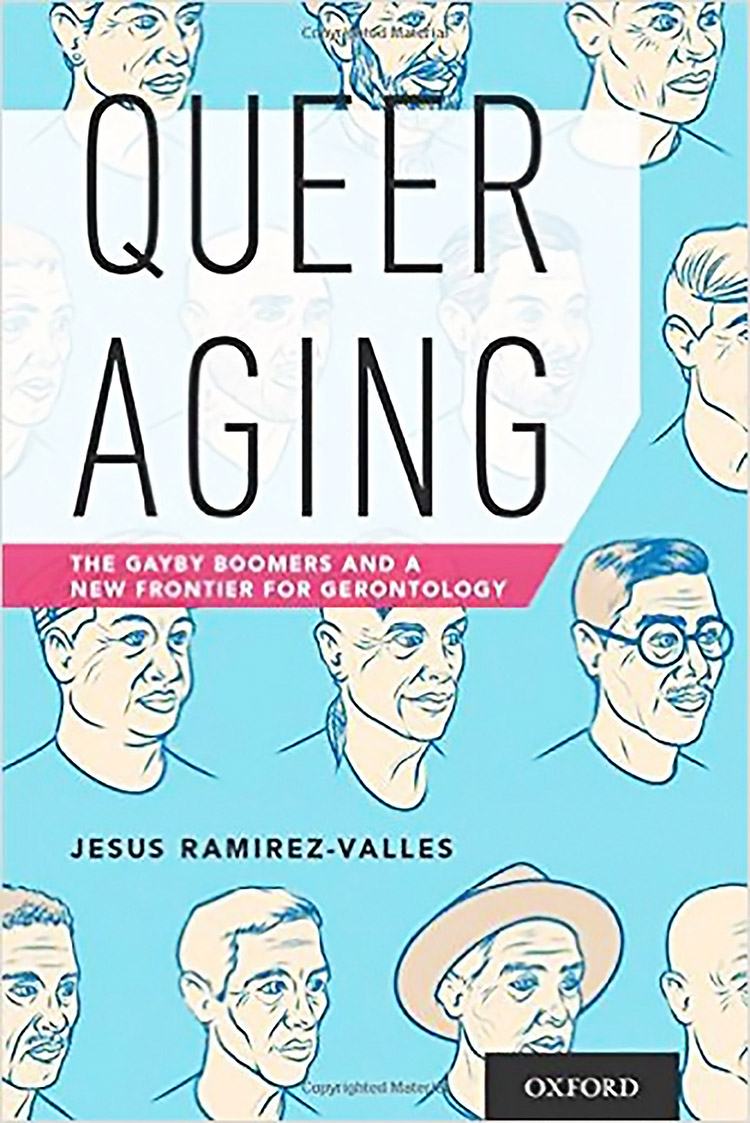 In “Queer Aging: The Gayby Boomers and a New Frontier for Gerontology” (Oxford Press, 2016), Jesus Ramirez-Valles, professor and head of community health sciences in the University of Illinois at Chicago School of Public Health, makes it clear that aging gayby boomers don’t fit the largely heteronormative beliefs and ideas about aging or caring for older adults, reports thefiftypluslife.com.

His groundbreaking book explores the unique landscape of gay aging through scholarly research and interviews with 11 racially and economically diverse men who provide first-person narratives on their experiences with work, family, the AIDS epidemic, activism, their roles as caregivers, and getting older.

“Aging is very different for gay men,” said Ramirez-Valles. “Their social support systems look different from those of heterosexual individuals and couples, and many senior housing or assisted living facilities struggle to provide services while being sensitive to their gay clients.”

Ramirez-Valles said such men can feel stigmatized in senior housing because of the lack of other gay men or couples.

“Sometimes staff or other residents just don’t know how to interact with people who are LGBT because they may not have had many gay friends or experience with the LGBT community,” he said.

“Gay men also have unique responses to the physical and emotional stresses of aging, and gerontology studies have not yet really explored this,” Ramirez-Valles said. “Gay culture is youth-oriented, so age discrimination is multiplied among gay men, and this is a major additional source of stress.”

“For instance, sex is a major way that gay men stay connected to the gay community and form friendships, but because gay culture is so youth-obsessed, opportunities for sex diminish as these men age—and this can be especially isolating.”

During his research for the book, Ramirez-Valles found that many men worried about who will take care of them as they get older, since many lack a spouse or child to fulfill the caregiver role. For some single, older men, the lack of a spouse is due to gay marriage being relatively new.

For others, the AIDS epidemic took partners from their lives. Without a legally-identifiable spouse, navigating issues like advance directives, pension benefits, health disclosures, or even how to explain to an assisted-living facility who your partner is can be problematic and lead to unease.

Another family dynamic impacting gayby boomers is rejection by their biological families. Families cutting ties with their sons and brothers who came out during the gay rights movement is unfortunately not uncommon, Ramirez-Valles said.

“This is one of the reasons friends are so important for gay men and serve as a kind of chosen family. But how do you explain that your ‘friend’ will be living with you in an assisted living facility that has no other gay couples?

“The thing that stuck out the most during my research was the housing issue,” Ramirez-Valles said. Mostly heterosexuals, including support staff, populate the vast majority of group housing or assisted living facilities for older adults.

“When a gay man or couple comes into one of these facilities, many experience some form of discrimination or will be treated differently. Some even feel the need to hide their identities because they are no longer in their own community where people know who they are and other like-minded people surround them. So making the decision to go into supportive housing, which is already an extremely stressful decision, is compounded by sexual orientation. For gay men who have been living openly gay for decades, it can be very hard.”

More LGBT-friendly housing is sorely needed, Ramirez-Valles said, as well as education and training for staff.