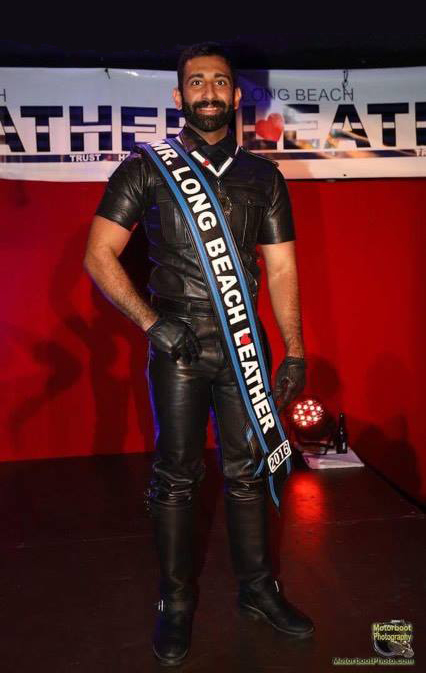 Ali – congratulations on winning the title of Mr. Long Beach Leather 2016! What motivated you to enter the contest?
There were two main reasons. Long Beach was one of the first leather communities I was introduced to when I moved back to Southern California. Since joining the leather community in Long Beach, I’ve grown attached to its people and their values. After watching several local institutions, like Pistons and the Krypt, close in the last year, what I hear about the disappearance of the leather and sexual, institutions was made real for me. Thus, I was motivated to not only maintain my community, but also to watch it grow. In addition, as a racial/ethnic minority, there were times I have felt excluded by the community, or have seen others ostracized by the community. I wanted to be in a position where I could do something to help everyone feel like they were a part of this community.

What does winning this title mean for you on a personal level?
It means many things to me. I’m ethnically South Asian. I was born in the United States to parents that immigrated to the U.S from Pakistan. Not only are we a minority in the U.S., but we are also not very visible in the leather community. Sometimes, this can lead to someone misconstruing my background, using other kinds of stereotypes to “figure me out,” or even meeting certain prejudice, such as Islamophobia in the leather community. Granted generally, I’ve been treated with respect; however, sometimes, I know that men of color, especially in states outside of California, aren’t so lucky. So to actually represent my community in Long Beach, both locally and internationally (as I will be a contestant at IML 2017) is a major personal achievement, especially since now I can say “yes, I am an image of a leatherman in 2016.”

Do you feel that being a member of Onyx contributed to your growth and journey to Mr. Long Beach Leather 2016?
Onyx is a national organization dedicated to bridging men of color to the broader community. I am an officer and founding member of my chapter, Onyx South West. It did two main things for me. It really opened my eyes to the difficulties that other men of color in the leather community, and who don’t also meet the conventional definition for a leatherman. Likewise, Onyx has provided me with the skills and mentorship I need to be a competent representative of the community. These skills include learning: about the leather community and its history, BDSM/kink practices in an educational setting, how to put on successful events, and how to present oneself as positive citizen in the community. So yes, Onyx has contributed to my growth that help me become Mr. Long Beach Leather.

What projects or issues would you like to engage in as a new title holder?
For me, I’d like my title year to be about coalition and alliance building, making leather spaces inclusive for marginalized communities, and growing the leather community in Long Beach. So that means getting to know local queer/LGBT nonprofits, going to leather organization meetings, and hopefully, hosting events that facilitate an introduction to the leather community for those outside the community.

Is there anything we haven’t asked you that you would like to share with our readers?
Getting to be a representative for the leather community is an amazing opportunity. Not only do I want to represent the interests of the people that put me here, but I also want to welcome newer people to the community. I want to showcase diversity in Long Beach, including sexual, gendered racial, age, body size, or even geographic diversity.