Descent Into Darkness | The Fight Magazine 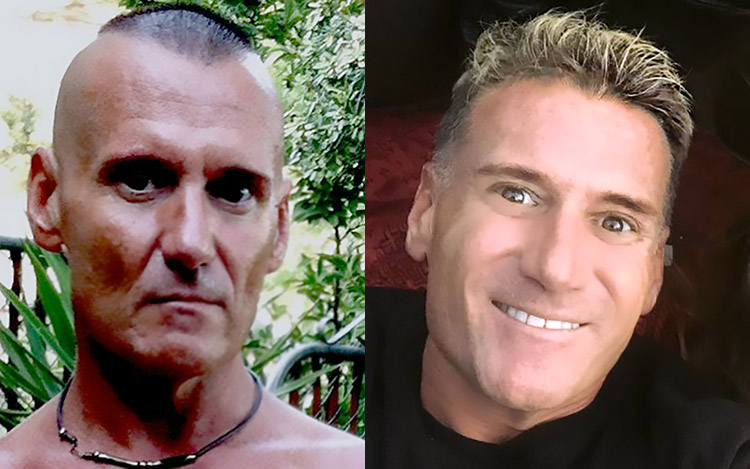 It’s the spring of 2005, three years into my addiction. I’m sitting naked on a bed in room 218 of a notorious hotel/ersatz bathhouse on Western Avenue, sharing my meth pipe with an emaciated, buzzed-cut stranger. Except he doesn’t feel like a stranger. Because that’s what meth does: use with someone else, and it’s as if you’ve known them forever and can see deep inside their souls, and they can see into yours, as if you were lovers in a past life the drug has reunited. Until it wears off or one of you comes, of course. Then it’s appropriately impersonal again.

I’ve been there for two days, ignoring the barrage of phone calls to my cell from my worried partner, Patrick, marching in the courtyard parade of the towel-clad undead, and indulging that particular brand of focused hyper-sexuality that only meth engenders.

The stranger and I are as high as kites, facing each other, making out, when he runs his hand along my back, and whispers in my ear:

“Do you get fucked?”

Good question. I think back to the jobs I’ve lost, the run-ins with police, the mental hospitals, the fucking mess my life has become, and answer: “No, but figuratively I fuck myself all the time.”

He doesn’t respond, either because he doesn’t know what figuratively means or maybe because it wasn’t a particularly funny joke. That’s another thing meth does: it makes me think i’m incredibly funny, when “barely intelligible” would be a more apt assessment.

I feel the need to clarify, so I tell him no, firmly.  Because even with my history of incredibly bad judgement, I know the statistics regarding HIV infection among gay meth users.  I watched too many friends die in the 80’s and 90’s, and there’s no way I’m going out like that. That I am already jaundiced, hollow-eyed and spotted with sores doesn’t occur to me, nor does it seem to bother him. I’ve got my own stash of crystal, therefore, I am attractive regardless of physical appearance.

He doesn’t try to persuade me, and I’m relieved. He asks if I want to do some of the GHB he has in his backpack, and I heartily assent. He measures out a couple of doses and we drink them down mixed with Gatorade. It takes awhile before I begin to feel the effect of it, but when it does hit I’m suddenly engulfed in waves of incredible warmth, my body feeling only pleasure, fireworks exploding behind my closed eyelids. I force them open, realize that I’m going under, losing consciousness. I try to sit up, to regain my mental footing, but the rush is rumbling toward me like a freight train. The room, lit only by the flickering closed-circuit porn on the tv, begins to darken further. I feel panic, but there’s nothing I can do as I slip headlong into the utter nothingness of the g-hole.

“It strikes me hard, the realization: I am 40 years old, and still crawling into shadowy places, emerging in a state of fear and disgust, with monsters clinging to me.”

Summer, 1972. I’m eight years old. The thick shrubs planted against the side of our home has created a dark tunnel where the house overhangs the basement windows. It is one of my favorite places to play, where I fantasize that I’m Captain Kirk, trapped and with only a few minutes of oxygen left. Or I’m Gilligan leading the castaways away from headhunters to safety through an underground volcanic passageway. I inch through the leafy darkness on my hands and knees, Husky-Boy Toughskins blackened by the moist earth and rotting leaves, towards the light at the end of the tunnel.

I return to consciousness in room 218 slowly, like a Titanic passenger fighting his way towards air against the suction of the sinking ship. When I finally reach the surface, I become aware that, strangely, my body is moving, being rocked gently by the waves. As my vision slowly clears, I see that a few inches from my face is the face of the stranger, who minutes (or was it hours?) before had been lying next to me. Now, however, he’s on top of me.

I’m eight years old, crawling through that dark hedge tunnel. Reaching the end, I stand up, and squint my eyes against the sunlight. I notice movement on my chest, and look down in horror to see a giant praying mantis clinging to my t-shirt. The monster is at least five inches long, staring and waving it’s giant monster pincers. I try to scream, but I’m too scared. I want to run, but I’m frozen. I want to flick it off, but I’m too terrified to touch it. I’m eight years old, and there’s is a monster on me.

I reflexively push the man off of me and pull up against the headboard. At the same moment I see he wasn’t using a condom, I also see that there are now others in the room. Two naked men stand next to the bed, watching and stroking themselves. Another, also unclothed, sits smoking in the chair by the window.  Before I fell into the g-hole, I was happily living out a love scene from Sid and Nancy—one of my favorite films—and now suddenly i’m in what feels like a gay mash-up of Rosemary’s Baby and The Accused.

In a flash, I understand that scene where Jodie Foster chops off all her hair in a post-violation rage. Because at this moment I would peel off my own skin if I could. I want to scream—like the hysterical lead in some Lifetime date rape movie—“I told you no!”

But instead, I measure my complicity against my utter lack of self-worth, and simply say, “I think I’m done.”

The men shrug and take their leave, the sun from the open door pouring  into the room, blinding my drug-sensitized eyes momentarily. It is not until they have all left, until I am alone in room 218, that I let the panic overtake me.

I scramble from the bed and towards the shower, jumping in without waiting to adjust the temperature. I violate myself again with the small cleansing bar, forcing suds inside me, trying to murder any viral intruders, scrubbing frantically with that small pink rectangle of disinfectant hope, my head pounding from the drugs and my body convulsing with fear and disgust. I scrub until the soap is almost gone, until dizziness overtakes me, and I slide down against the plastic wall of the small shower.  Crying, sobbing, shaking, my mind fills with visions of Kaposi Sarcoma lesions and gaunt, disease-wasted faces. My fear escalates as I wonder how many men had used me while I was unconscious. And though I pray—to a God I don’t yet believe in—that it was only the one, I know one is enough. When the soap and the tears are gone, I dry off zombie-like and go back to the room.

Kneeling next to the bed, I retrieve my backpack, find my cellphone and turn it on. There are over 20 voicemail messages from Patrick. I don’t listen to them; don’t want to hear the panic or disappointment in his voice. I’ve had many messages from him of this sort, his voice trembling with fear and anger. “Andy, where are you?”

I’m struck by the irony that my partner, a man who has spent years making millions laugh on dozens of TV shows, is now—by no choice of his own—playing a co-starring role in a drama too dark, too sad and too sordid for network television.

A phrase I’ve heard in the rooms of recovery during my sporadic, half-assed attempts to get clean echo through my mind: Pitiful and incomprehensible demoralization.

I dial our home number, and he answers on the second ring.

At first, I can’t speak, my crying beginning anew. I can’t get words past the sobs.

“Andy?” I hear Patrick’s voice, sounding simultaneously relieved and enraged.  His voice reminds me of what I have lost, what used to be. It reminds me of kindness, clean sheets and mopped floors, integrity, honesty and morality.

It strikes me hard, the realization: I am 40 years old, and still crawling into shadowy places, emerging in a state of fear and disgust, with monsters clinging to me.

He is listening, saying nothing, and finally I’m able to get the words out:

Author’s note: It would take another seven years to finally and fully surrender to recovery, to go from wallowing in misery to discovering joy, from utter hopelessness to believing in miracles: the miracles of clear thought, self-esteem and a sense of purpose. The inexplicable miracle of continued negative HIV tests, the miracle of regaining the trust of my friends and family, and the miracle of finally understanding the beauty of calm and of living in the light. And the biggest miracle of all: the continued presence of my now-husband Patrick, who always protected himself from my insanity, but still waited patiently at the mouth of every dark tunnel I crawled into, shining a flashlight and praying that I’d eventually find my way out.