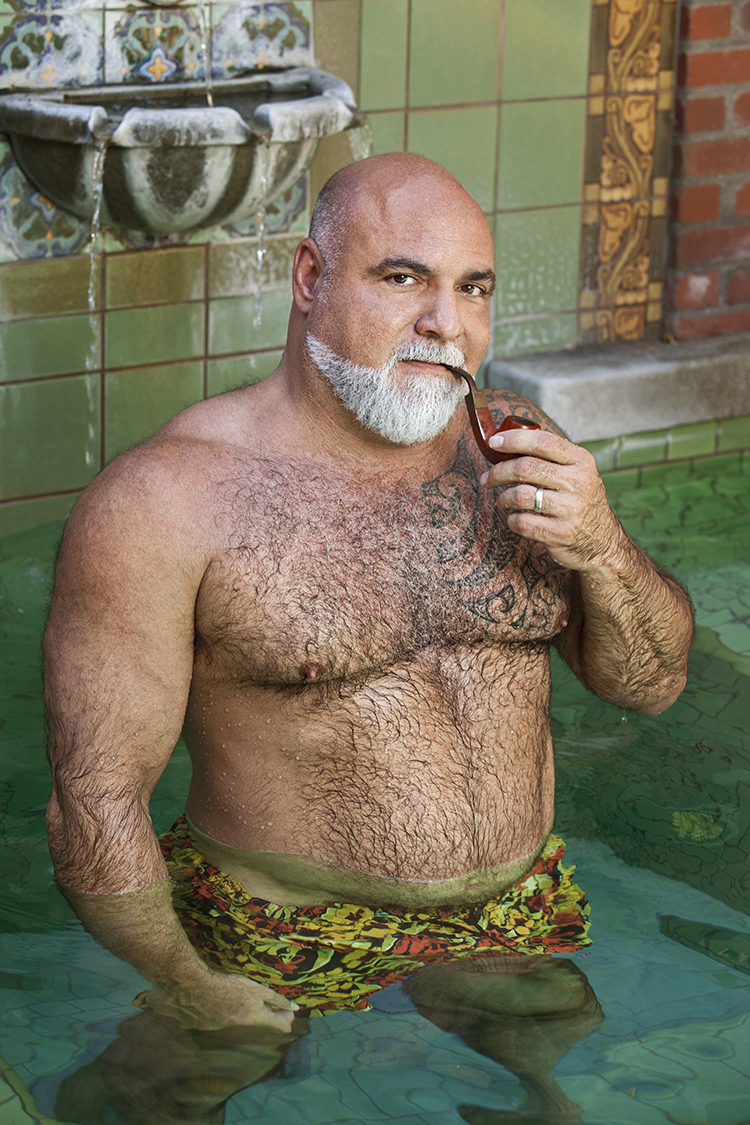 The Eagle L.A.’s Charlie Matula on growing up in the Southland, his career as a gay bartender and later bar-owner, and what it means to be a Daddy.

When you think of a “Daddy” you are probably picturing someone very similar to Charlie Matula. Handsome, mature, burly and bearded, Charlie is—with his business partner Vince—co-owner of the Eagle L.A. in Silver Lake and a longtime fixture of Los Angeles’ gay nightlife.

But Daddies are not born, they are made, and Charlie sat down with us to discuss growing up in the Southland, his career as a gay bartender and later bar-owner, and what it means to be a Daddy.

Tell us about your childhood.

I had a pretty average, middle-income family life I suppose, growing up here in L.A.—Temple City to be exact—with my mom and two sisters.

When did you realize you were gay?

A trip to the Pleasure Chest when I was 17 kind of started it all.

How did you come to be at the Pleasure Chest for the first time?

My sister’s boyfriend at the time was a bouncer for the band Motley Crue. Right when their first album was coming out, he said “there is this place in West Hollywood called the Pleasure Chest. They’ll close the store and let the band come in after-hours to get all the gear for their shows.”

I was a drummer in a band, and I was like “Rock n’ roll, lets go!” So we hop in the car and go to West Hollywood, and I walk in to the Pleasure Chest and I was kinda blown away. I didn’t even know that places like that existed, and I saw magazine racks with all these gay magazines. Fast forward two days later and Charlie is driving back to the Pleasure Chest by himself. I bought a few of those magazines, and that opened the doors right there. It was a pivotal moment—thanks to Motley Crue. [laughs]

“… Some people think that if you’ve accepted the daddy role that means you can’t play with other daddies. That’s bullshit, whether it be physically, emotionally, or sexually, it’s always fun to have big muscly arms around me, holding me.”

How much daylight was there between figuring out you liked guys and acting on it?

I was kind of a late bloomer. When I was 20 I was hired as an air traffic controller, and had to go to their training headquarters in Oklahoma City. It’s kind of like a boot camp, you stay in apartments which are designated for this training, and everyone carpools into work. This kid that I carpooled with was from New Hampshire. He was openly gay, and he opened a lot of doors for me, took me to my first gay bar.

And after that I knew I wanted—and actively pursued—hooking up with guys.

What was gay life like when you were in your teens and 20s?

It was the early 80s, AIDS was just hitting the scene and I started losing a lot of new friends. Was a very scary time, especially while coming out.

Everyone was very health conscious, and all the smooth shaved gym-bodies trying to show off that they were healthy. That’s what I came out to, and thats what I thought everyone wanted. It wasn’t until I went to The Spike and saw this whole other world of bellies and beards. I didn’t know it was there.

What was it like to come out at the knife’s edge of the AIDS crisis? I imagine everyone was talking about it, or at least aware of it.

There were a lot of people who were in denial about it. There were people who knew about it but we weren’t educated enough to know what it was yet. People were afraid to kiss each other. They were afraid to sit on each other’s toilet seats. It was very scary. It was like playing Russian roulette every time you hooked up with a complete stranger, and we’d go home beating ourselves up thinking “Did I just commit suicide?” It was unknown territory and it was all very, very scary.

And then to watch the people around us, our best friends… by the time someone got ill from it, it was too late. They’d check into the hospital, and they’ d have a few weeks left. It was happening all around you, and it was just frightening.

How did you discover leather bars?

A friend of mine had a little Damron guide … I’d always stop on the bars and clubs that had drawings and photos of Leathermen. That’s what I was always attracted to, but for whatever reason I would never pursue that.

I had gotten involved in my second relationship when I was around 24, 25. He took me to [now defunct L.A. Leather bar] The Spike for the first time. That opened the door to the world of hairy, muscle-y men. And I thought “now I’m home.”

I knew of places like The Spike, but I was very intimidated by them. Looking back it seems ridiculous. [laughs]  When I meet young guys who come to the Eagle for the first time they tell me “I’ve always wanted to come here, but I was so scared. I hear all these stories.” But I get it, I was like that when I was younger.

What was the first gay bar you worked at?

That was The Spike. My second boyfriend and I used to hang out there, got to know the owner really well. I left air traffic controlling, gave that up, went into special effects make-up for a while. I’m sure you have friends in the [movie] industry, you work for a while then you starve for a while, and so on. I’d been out of work for a couple of months between shows and nothing was lined up, and the manager of The Spike asked me if I’d like to bartend though the summer. This was 1990.

I thought it would be a good thing to learn, something to fall back on between shows. I had such a good time and made a shit-ton of money—way more than I was getting at the studios doing effects—and I never looked back. [laughs]

When and how did you come to own The Eagle?

I have been in the bar business for just over 25 years now. I was manager of Gauntlet II for five years—2000-2005—when then owner decided to retire and sell the bar. I bought it with my business partner—Vince—and changed the name to Eagle LA in 2006. I had just turned 40. I don’t know if I’d call it a midlife crisis, but I was at this turning point where I had been in the business for quite a few years. And working in a bar is good money, even some of the bartenders take home more money than me with tips on a good day, that’s just the way it is. But the older you get the more limited your options become.

After The Spike I went to work at the original Eagle in West Hollywood, and it closed in 1995. It was always kinda my goal to reopen it and own my own bar, and there were three close but failed attempts to do that. So I was actively pursuing trying to open a bar—namely The Eagle—so when the opportunity came along I jumped at the chance.
Why “the Eagle?”

There is a lot of brand equity in The Eagle. There is an Eagle in almost every major city in the U.S.  and some in Europe. And if you’re a certain kind of guy, you know the Eagle, you know what you’re gonna get. My biggest fear was that someone would beat me to it.

It is a lot of work to be honest, but it has HUGE rewards. I have made many friends within the local L.A. community and throughout the world. I feel very blessed to have this experience. Plus I get paid to drink and hang out with my friends, don’t know of many jobs where you can do that.

What does it mean to you to be a “Daddy?”

It means getting older. [laughs] Seriously though, I guess some people perceive me as a leader within the community, along with my bald head and silver beard, a Daddy was born. I approach it as a role of support: financially, emotionally, physically. A role of authority. People look up to me and refer to me as daddy. the staff of the bar call me daddy.

My husband Hunter Fox and I have been together 11 years. We got married last September, and he calls me daddy. He’s the love of my life, my soulmate. And I am his daddy. He’s my boy.

There are some who take the role far more seriously. They think if you fail to spell “daddy” with a capital “D” you’ve committed a sin,[laughs].

How difficult or easy was the transition into Daddyhood?

It came very naturally. We all get older, some deal with it better than others.

Do you have any advice for guys on the cusp of being a Daddy?

Embrace your daddyism. And some people think that if you’ve accepted the daddy role that means you can’t play with other daddies. That’s bullshit, whether it be physically, emotionally, or sexually, it’s always fun to have big muscly arms around me, holding me. Even Daddies need Daddies.