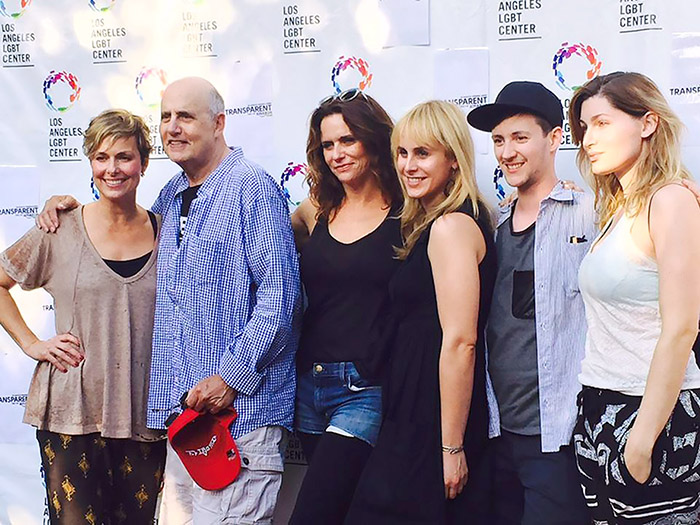 TRANS PRIDE CELEBRATION AT THE VILLAGE

The Trans Pride L.A. festival celebrated the strength of the trans community with a day of outreach, music, food and beverages and dance. Over 30 organizations and vendors were on hand with community outreach and arts and crafts.

The Advocate/Gochis Galleries hosted a community art exhibit entitled “We Can Be Heroes”, featuring work from acclaimed trans artist Sandy Stone and a special interactive mural project by young, up and coming trans artists from Trans Youth Speak, Lifeworks and the Center’s Homeless Youth program.

Trans Pride L.A. kindly thanks Amazon’s original series Transparent for their generous support of the event.

The Los Angeles LGBT Center’s Learning Curve program has unveiled a unique and groundbreaking new program—Trans Lounge—dedicated solely to the empowerment and health of the trans community in SoCal.

Classes, workshops, social networking groups and mixers are all available and programmed by the members of the lounge. The Trans Lounge is free of charge.

California has taken a definitive lead in transgender prisoners’ surgical rights following an appeals court ruling last month that trans inmate Mia Rosati’s rights may have been violated when she was denied access to gender-affirming surgery in prison, reports the Associated Press.

The news comes after Michelle-Lael Norsworthy, a 51-year-old Ione, CA inmate, became the only prisoner nationwide granted access to gender-affirming surgery following an April order from a federal judge to California’s Department of Corrections. Norsworthy’s surgery, however, has been postponed since late May after she was granted the possibility of parole.

Though the decision the ruling in Rosati’s case does not guarantee the 58-year-old trans woman access to surgery, the Ninth Circuit Court of Appeals found that her allegations of cruel and unusual punishment and denial of equal protection were “plausible and sufficient” to warrant further review by a court, according ot the AP. A lower court had previously thrown out Rosati’s case.

Katherine Prescott’s transgender son, Kyler, took his own life in May this year after being bullied online. Still in mourning, Prescott is urging people to get behind a family friend’s effort to bring more resources and support services to trans teens and their families, reports The Advocate’s Thom Senzee.

Kathie Moehlig is a local advocate for transgender rights and mother of a 13-year-old son named Sam, who is also transgender.

“Since Kyler passed, I have a far deeper sense of urgency to get this out there; this void I think we can fill,” Moehlig tells The Advocate during an interview at her home in San Diego’s Rancho Bernardo neighborhood.

In the wake of Kyler’s death, Moehlig has launched Trans Family Support Services—www.transfamilysos.org—and she is currently in the process of securing nonprofit status.

The Girl Scouts of Western Washington were thrilled to receive a $100K donation last month until they read the request that came with it. It read…”Please guarantee that our gift will not be used to support transgender girls. If you can’t, please return the money.”

The Girl Scouts returned the money stating “Girl Scouts is for every girl. And every girl should have the opportunity to be a Girl Scout if she wants to.”

Since returning the money, others have stepped up to replace the $100K donation lost to bigotry.