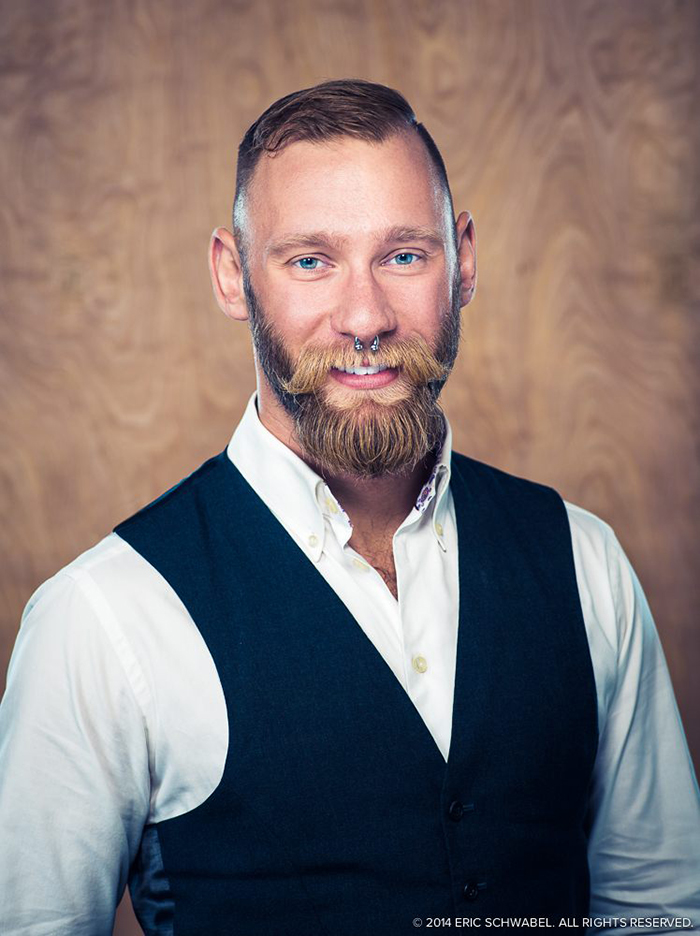 Eric Paul Leue, HIV/AIDS activist and Eagle Mr. LA Leather 2014, on the side effects and side benefits of the pre-exposure prophylaxis (PrEP) drug Truvada.

Eagle Mr. LA Leather 2014 and community leader Eric Paul Leue has worked for HIV awareness and fought against HIV-related stigma and discrimination for over 10 years.

In an interview with THE FIGHT, he discusses the side effects and side benefits of the pre-exposure prophylaxis (PrEP) drug Truvada, and what it means, in 2014, to be “responsible,” “safer” and “protected.”

Where do you think we are—as gay men—in the dialogue regarding HIV/AIDS and its prevention?

I believe we have arrived at a turning point. As Peter Staley [American HIV/AIDS-LGBT rights activist] said: “…when this crisis is finally over, there will be two kinds of people remembered: those who fought to end it, and those who slowed us down.” Thirty years after the HIV crisis began, we finally have scientific proof that we are able to stop the virus from spreading further with efficacies beyond 99%.

Do you feel there is a divide between HIV- and HIV+ men in the gay community?

The divide that I see is solely based in heaps of one-sided misinformation as well as cultural and personal judgments over others. I am HIV negative. Two of my three long-term relationships were with HIV positive men. Both basically ended because my partners were afraid of the “What if Eric was to become HIV positive through me?” This was not about whether we could or couldn’t fuck raw, but because from their perspective the fear of infecting me took the pleasure out of our intimacy.

There are other forms of PrEP, what makes Truvada the drug of choice?

Truvada is the only FDA approved anti-retroviral drug (ARV) combination for PrEP (Pre-Exposure Prophylaxis) since 2012. Other forms of PrEP such as long-term injections, gels & rings, as well as other drugs such as maraviroc and ripilvirine are currently being researched. Truvada was first FDA approved in 2004 for use as anti-retroviral treatment (ART). It is the most prescribed HIV treatment medication, shows the least side effects, consists of only one pill per day and consists of two active agents (tenofovir, TDF and emtricitabine, FTC).

Exactly what does Truvada do to your body?

Truvada’s active agents TDF and FTC are so called nucleoside reverse transcriptase inhibitors. In order for HIV to successfully infect a person, it needs to reproduce. There are different enzymes we know of that the virus needs to do that. Truvada prevents the virus from reproducing by blocking one of the enzymes.

What are the side effects?

There are side effects and side benefits. Most people I have talked to experience what we call the starter syndrome. Those mild side effects like nausea, diarrhea, night sweats, etc. usually occur within the first four weeks and disappear. Other side effects that show over time are usually bone density loss, and effects on liver and kidneys.

While none of the side effects are irreversible after the prevention regime is discontinued, they also don’t appear as often in HIV- people as in HIV+ people. People are always concerned about toxicity levels and like to get polemic by comparing Truvada to the first ever ART called AZT. AZT has a toxicity switch ratio of 43.5%. TDF is at 6.4% and FTC at even less with 1.2%. The regular check ups are what I call a side benefit, just like the reduced chance of getting herpes. One of the most valuable side benefits though is the alleviation of anxiety about HIV.

How important is a daily dosage as directed?

“As directed” does not just mean daily, but daily at about the same time of day. This is important for two reasons: efficacy and adherence. A daily routine is generally easier to adhere to than if I do something every other day.

The 2014 CDC guidelines about PrEP state that with 7 doses per week an HIV transmission prevention efficacy of 92% is achieved.

What happens if you miss a dosage or two?

So the question you need to ask yourself is “Am I more likely to adhere to a pill in the morning, or putting on a condom right before intercourse?”

PrEP is different, because even if I miss a dose, PrEP’s half-life is between 31 hours (TDF) and 37 hours (FTC), meaning the drug levels only slowly decrease. A regression model calculation based on the iPrex study showed in 2012 that PrEP’s efficacy is 99% with 7 pills per week, 96% with 4 pills per week and 76% with 2 pills per week. In the iPrex Open Label Extension (OLE) the researchers found that no patients that adhered to more than 4 doses per week were infected with HIV.

Where does PrEP fit in with other STIs?

PrEP (in form of Truvada) prevents HIV infections in the entire body of an HIV negative person and it reduces the chance of getting infected with herpes. While Truvada (specifically tenofovir) is also used as treatment for Hepatitis B, it does not prevent any other STIs.

One of the biggest challenges regarding the conversation about PrEP is the misconception that STIs are only contracted through vaginal/anal intercourse and hence a condom stops every infection.

There are bacterial STIs like gonorrhea, chlamydia and syphilis, and viral STIs like HIV, herpes, HPV and hepatitis B. All of these bacteria / viral infections can be transmitted through other ways than just condomless anal/vaginal intercourse. Most of them even through oral sex, “intense” kissing, or even as a smear infection from a toilet seat or door handle.

I have personally had chlamydia & gonorrhea in my throat, and I have had a cold sore on my lips once or twice, which would mean that I have herpes just like pretty much everybody else in the U.S. does. Scary? No, but I suppose if you don’t know what that means it could be.

First of all, I mentioned this before, regular testing (knowing of an infection) is key in preventing transmissions by enabling us to stop the transmissions cycle. In the U.S. only half of all people between 18-44 have at least had one HIV/STI test in their life. That’s a very low number. PrEP users will at least have four tests per year and hence inspire others to do the same by making regular testing normal.

Secondly, let’s put it in perspective, in numbers. HIV is often referred to as the only STI that can’t be cured. While there are other incurable infections like HSV (herpes), specific types of hepatitis, and HPV (human papillomavirus), untreated HIV remains to be the most fatal.

The iPrex OLE study—as well as every other study—found that there was “no sign of increased risk behavior among PrEP users.”

I don’t think it is wise to oppose PrEP on the same grounds on which we would have to abandon every other prevention tool too. PrEP prevents the most dangerous of the common STIs with the highest efficacy.

What are some testimonials on PrEP that stand out in your mind?

Quite honestly the one I hear the most is by the generation that had to experience the first years of HIV: “If we had had this 30 years ago we would have all been on it. We would have demonstrated, broken down gates and doors to get it cheaper, make it more accessible, and to protect everybody.”

Eric Paul Leue can be reached via Facebook at Mr L.A. Leather.