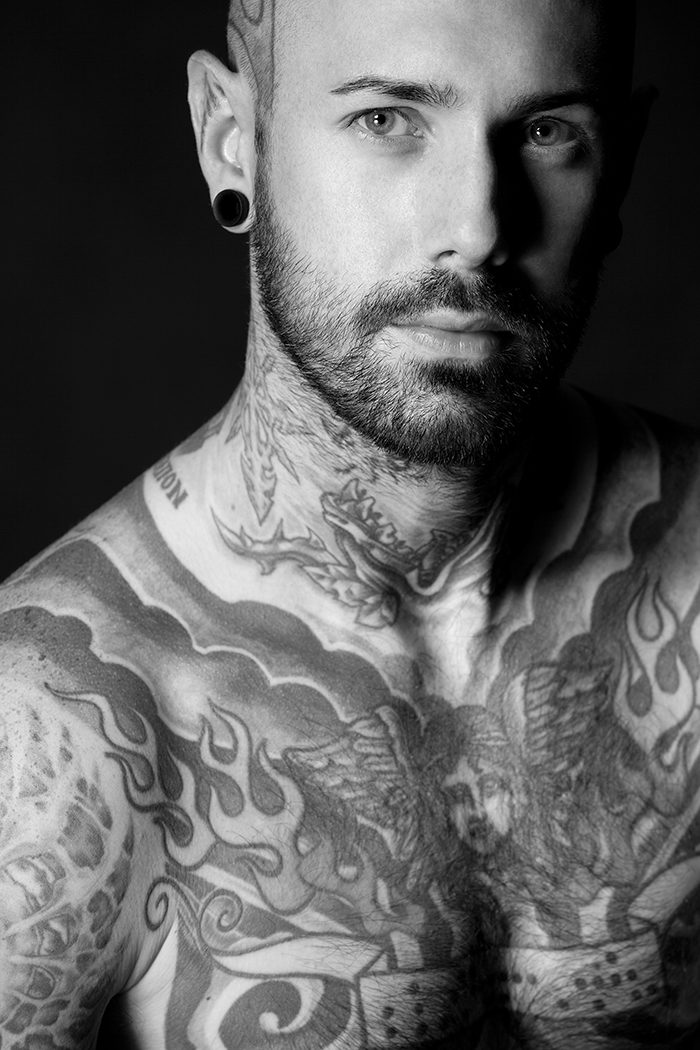 Tattooed pin-up model and pop artist Trevor Wayne injects humor into horror with brightly colored prints where bananas replace threatening objects in classic horror films, classic Hollywood sex symbols hold a hotdog, and iconic characters get switched around to create The Golden Girls as the Super Friends, Elvis as Superman and Jerri Blank as Shera, to name a few.

Aside from being a walking colorful work of permanent tattooed art (Wayne’s likeness has appeared in print ads, coffee table books and he’s even graced the cover of THE FIGHT) he wants to be recognized for his own contribution to the pop art world.

In an interview with THE FIGHT, Wayne discusses the art of male frontal nudity, dark comedy, his dislike of baby doll heads crying blood and how his art form is all about having some silly fun.

How do you prefer to be addressed in terms of what you do?

Artist. It covers all bases.

At what point in your life did you decide to nurture your art and go pro?

I don’t know that I’ve gone pro as much as this is just what I do. I don’t have anything else, or a fallback career. Sink or swim.

Did anyone ever tell you to get a “real job?”

Just the teachers at my art school [laughs]. 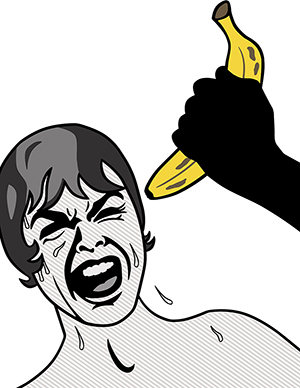 What should people love most about your prints?

They’re meant to bring in some fun, positive energy. I am not claiming to be the best pop artist, or even the best artist. My work isn’t meant to be pretentious. It is silly and fun. I love that. I think there is way too little of that in the art world right now. I don’t want to walk into an apartment and see ravens with baby doll heads crying blood, and paintings of teeth scattered on a doctor’s table. I don’t like dark imagery like that.

Your “Horror Banana” series pokes fun at some horror movie classics – what inspired that?

I was a huge horror movie fan. I now try to stay away from it. I’m aware of how fake it is. That being said…I still love dark comedy, the kind of horror where you leave laughing, like “Cabin in the Woods,” “Evil Dead”—the first ones, “Little Shop of Horrors” or “Death Becomes Her.” That idea of dark imagery shaping us subconsciously made me want to pay homage to the most classic, terrifying, iconic horror scenes—but replacing the horror with something funny and non-threatening.

You offer to a personal hand delivery of your art to collectors anywhere in the U.S. for a fee, any takers?

I actually have had buyers fly me out to NYC, Chicago, Omaha, and San Francisco a few times. It has been a great experience and not as creepy as it sounds. Some people don’t have time to travel and love the idea of having artists they admire come to them to hang out and have a few drinks with. It’s been a great way of meeting new people.

What sort of reactions do you get for your nude pics in your website?

Some people really like them and appreciate the underlying humor. Some people have written me hate mail telling me I’m ugly, and that I must think I’m so hot, and I should stop.  I’m not going to stop.  I am just me. I just do it. I wish more people would. Don’t be afraid to put yourself out there because you’re not the typical gay or straight standard of what a model is. The idea of what our community thinks is the standard for sexy is absurd to me, and I can’t be the only one who feels that way.

Why do you consider full-male frontal nudity “pop art?”

Because now that being gay is more accepted in our culture, many gay artists are stepping up and painting male nudes and using men in their art. Fine art in the late 20th century seems to be mostly all female nudes. I think men were afraid to photograph men, or paint them nude for fear of being accused of being gay. Now we are having such a swing in the other direction, that I consider male nudes pop art, because to me it is very much a sign of our modern times. 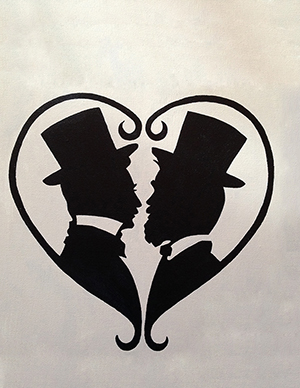 I think sexuality in art is powerful because sex is one of our most basic instincts. I’m sure people in the old days beat off to the statue of David—all while calling it art. I have seen some wonderful fine art of male nudes with erections. I think having an erection doesn’t make it porn—and also porn can be art. It can be pop art. Sex can be art. For me personally, I don’t want to have sex with another person on camera. I like that my pics are for guys and girls—even if I am wearing a fox mask, and fucking a blow-up sheep in one photo.

What are some of your best-selling prints?

I’m still painting my “Horror Banana” series in oils—almost done. Then I have a new series in mind that is not pop art. I’m kind of nervous about it, but that’s what makes it exciting. n

Trevor Wayne’s artwork will be on display throughout the month of August at Groundwork Coffee, 1501 N. Cahuenga Blvd. (at Sunset) in Hollywood. To purchase his artwork, visit trevorwayne.com.