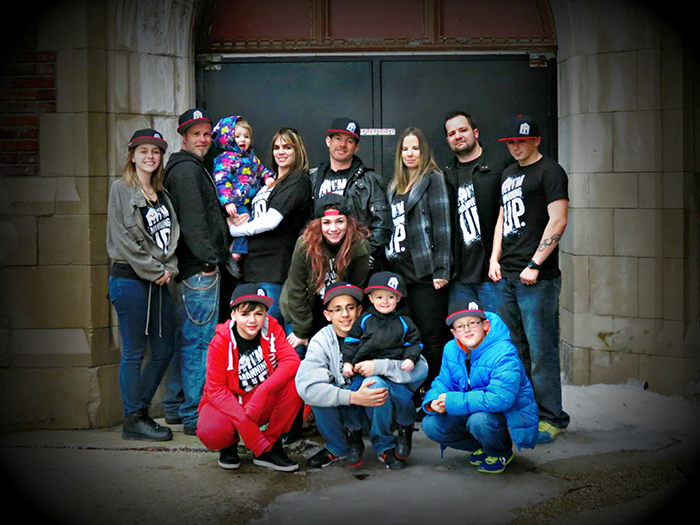 My name is Jeremy and I’m an alcoholic, a drug addict and I have bipolar Disorder. I should feel shame about these things but I don’t. I should keep these things secret but I can’t. To hide in the shadows means I’m still a victim and I refuse to be that. This is my confession.

In October of 2011 I wrote my first article for THE FIGHT. I was featured on the cover and wrote about my recovery, my childhood and all the shitty things I’d been through. A recipe of entitlement – the moment when my ego began to manifest into physical form. When my addict secretly plotted my demise.

For most of my life milestones were recorded by wreckage and devastation. Car crashes and near death experiences outweighed successes and all I saw was hopelessness on the horizon. It’s all I ever thought I deserved. Then I lost my mom and everything began to change for the better. My view of myself changed and I challenged the world to accept me. Embracing the challenges I once viewed as failures, they became lessons and I used my torrid history as a means to gain an audience. In what seemed like an instant, I became a published writer and radio show host and the image of my newfound-self began to grow.

I fancied myself a champion over the desire to drink and boasted almost daily of my conquest over meth addiction. All the while I was sinking further into the abyss than I’d ever been before. The bigger I perceived my image, the greater my fear became of admitting the truth. I was telling readers that I was sober and drinking more than ever. On my radio show I hosted guests who also struggled with alcoholism, who were sober and called into my show through Skype. No one saw me drinking from my sound station…from my hiding place.

For the next couple of years I drank and smoked pot to manage my rising success. I drank and I used drugs to deal with whatever reason or rationale that fed my addiction. During phases of fleeting sobriety I acquired more allies and opportunities. Still, I returned to the bottle over and over again. It often began with a couple of sips or cocktails and quickly escalated to shots of tequila for breakfast and a steady flow of booze to get me through each day.

Everything was out of control and I hadn’t learned how to manage my life. I just got better at covering things up. Or maybe I got better at convincing myself that no one knew the truth. When the only person who believed I was getting away with anything was me.

I went to AA meetings and told everyone I was doing great. I told them I was sober, took chips and even spoke at a meeting where I accepted a cake for “one year of continuous sobriety.” When I hadn’t stayed sober for more than a few months. In fact, I smoked pot on the way to accept my cake and I was stoned when I spoke.

Everything started to feel like cheating at Solitaire and the deeper I dug myself into a hole, the harder it was to find my way out. I was convinced that if I could figure out how to stop drinking everything would be okay. But I didn’t really want to stop as much as I wanted to avoid inevitable defeat. In spite of my best efforts, I’m not a very good liar and trying to exist in recovery while I was drinking got exhausting pretty fast.

What’s worse was trying to represent the best image of myself while I knew I wasn’t that person. Maybe that’s life. Maybe that’s how a lot of people live, somewhere between the perception of self and the image we express to everyone else. All I know is that the line between who I thought I was and who I wanted everyone else to think I was became blurred by self-induced delirium.

I felt on the top of my game and in the dregs of alcoholism at the same time. My dreams of being published had been realized. I was a partner at a high-end personal training facility in West Hollywood where I helped nearly double profits. My name popped up in press for numerous achievements and community efforts, while I lied about my drinking and drug use. I tormented my exes, created conflicts among friends and made every effort to sabotage all the good I’d been offered. Everything got worse.

I thought I deserved to be praised for my efforts because I spent so much time being punished for my failures. I was the greatest, most admirable piece of shit you could fathom and goddamn-it-all I deserved to feel like the glorious trash I’d become.

Inside I felt worthless and bathed in misery while I put forth every effort to convince you otherwise. Because your opinion of me was the mark by which I was measured—If you didn’t love me, you hated me. There was no in between.

Drinking, drugs and mental illness converged into a massive path of destruction. I love you. I hate you. Fuck off. Don’t leave me. I’m afraid, I’m unstoppable. I can do anything. I can’t get out of bed. Don’t fucking talk to me. Why won’t you answer me? Why do you hate me? If you leave me I’ll die. I can live forever. This is my legacy. This is my goodbye. I’ll be legendary. I just wanna die. I can’t deal with any of this. I can handle more than you can dish out. I just want it all to end. I need to find oblivion. I needed to find answers. To stop my racing thoughts, my rollercoaster emotions and get a grip on the vortex of sadness and rage I’d created before everyone saw the smoke when I crashed and burned. I needed to get high.

There was this moment when I sat alone in my apartment after a few days of smoking meth and drinking. I scanned the room with tired eyes and squinted at piles of unpaid bills and garbage bags filled with empty tequila bottles. Trash was scattered everywhere. My dogs were dirty and sad-faced. The place smelled like piss and burnt plastic and it hit me for the first time, this was an unmanaged life. I had to decide then to get sober or die. There were no other choices. They had all been used up.

I was done pretending I was something I wasn’t. I’d grown so tired of trying to convince everyone that I was better than them. That’s what I thought they needed to think and I was tired of being wrong. Because I didn’t care anymore and I was done feeling less than everyone else too. I didn’t know what any of it meant or how to fix my thinking. All I knew was that I wasn’t the one to be asking for answers.

The words of my dear friend Mylee YC stayed in my heart for months after she and others discovered my secrets. She told me the night they’d seen me drunk that I needed to give up everything I’d come to believe was my own. That everything I’d been doing was what lead me to this place so I had to do something different to create real change. So I did the one thing I’d avoided all along. I admitted to myself with unrelenting honesty that I had a problem and I needed help.

It took a lot of determination and faith to get into rehab. There were a lot of obstacles along the way and I really didn’t want to stop drinking. Not yet. People often asked, “Are you willing to do whatever it takes to get sober?” and I couldn’t say yes. I didn’t know how to and I didn’t even want to. I just felt like I had to.

So I did, but this time I did things differently and embraced the help I was given.

It was in rehab when I realized that addiction and mental illness were both responsible for my suffering. I decided not to argue or analyze chicken and egg theories or wonder why I had to deal with these issues.

All that mattered was that I had a problem and needed help. That no matter what, I couldn’t and wouldn’t drink or use. I learned that drinking wasn’t the problem it was a symptom of something deeper and the solution was love. The love of my family and all the friends who supported me when I gave up everything to go into treatment.