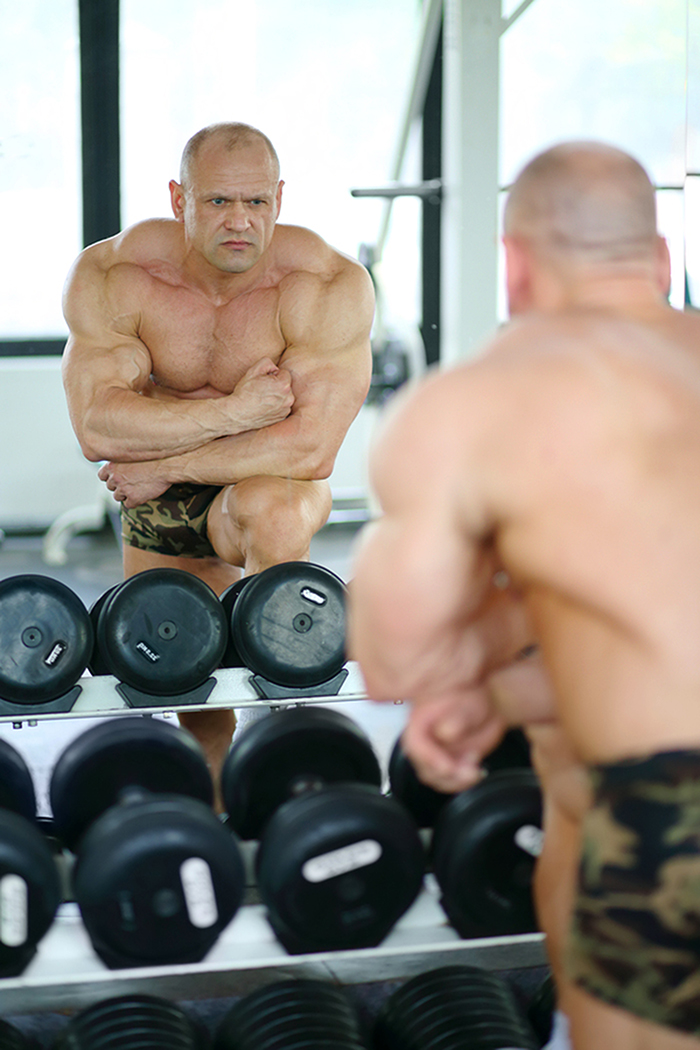 The reverse side of anorexia: muscle heads who see a scrawny underweight weakling when they look in the mirror.

Most in recovery recognize that the addiction to drugs and alcohol can easily turn into an addiction to working out and building muscles, but it turns out that bigger isn’t always better—at least not to muscle heads who suffer from of a form of body dysmorphic disorder (BDD) known as bigorexia, where an individual is addicted to going to the gym, consuming muscle building powders and weighing over 200lbs, but all he sees is a scrawny underweight weakling when he looks in the mirror.

Spending mornings avoiding a mirror because a person tends to wake up feeling smaller after many hours of sleep and the sight of a deflated figure can make a person depressed and obsessed over an imagined weight loss.

A person is known as narcissistic or an exhibitionist because he feels insecure about his physical appearance and is always seeking outside validation and reassurance that he has big muscles.

A person has trouble accepting compliments because he feels being lied to, because they don’t feel attractive.

A person belongs to several different gyms and spends nearly half their paycheck on supplements, food, and anything that might help him go bigger.

A person centers his life around the gym and finds himself avoid social settings where he might stay up too and risk not getting enough sleep, therefore ruining his workouts the following day.

Though the exact cause of bigorexia is unknown, studies indicate that it could be due to a combination of various factors that may include:

Insufficient levels of serotonin in the brain, which is an important brain chemical that determines the mood and well-being of an individual.

Such as troubled families, extreme stress, and other emotional and cultural factors as well.

Studies suggest that muscle dysmorphia is often found in individuals who are involved in weight lifting and other muscle development activities.

Currently, no specific programs have been developed to help people with BDD because not many people recognize they suffer from this disorder and fail to seek treatment.  It’s hard to convince a person with BDD and recommend help.  Different approaches to help a person recognize the condition include: having open discussions about body image, encouraging a group or team discussion, and soliciting the help of coaching and support staff to address the topic.