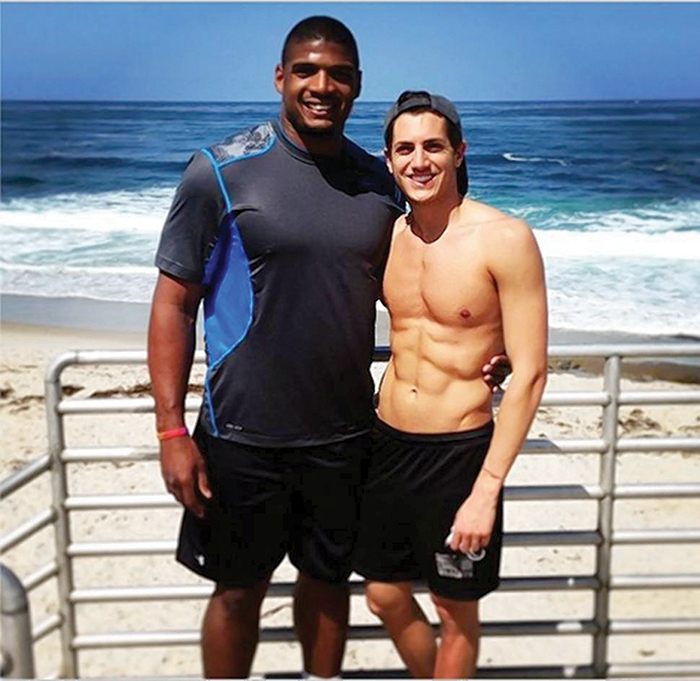 I think Michael Sam is a great guy but he’s not the gay Jackie Robinson. Jackie Robinson was a star athlete, Sam is not. But he’s gay and he kissed his boyfriend on TV which generated a lot of press. I can’t get that excited for some reason.

FORGIVE ME, FOR I HAVE BORED

> I just reread my last column for THE FIGHT and found it incredibly tedious. My apologies to all for rambling on about the Ninth Circuit’s possible review of the Gay Juror Case and for all the blather about the composition of the Sixth Circuit. Who cares if these topics are central to our historic fight for justice and equality? Surely we can dabble in lighter fare, a gay news tapas bar if you will, rather than a giant steak.

I have to say, before we start, that tapas bars are beginning to annoy me. I love the idea of ordering one or two small, elegant plates of delectable tidbits instead of getting one giant thing. But these days, the tapas are tiny and their price tags are absurd. Twenty bucks for one lamb chop with some greens? Fifteen for a couple pieces of cured meat and a dry tartine? We’re paying for a concept, and it no longer adds up in my book. Give me a double gin and tonic and a bowl of free pretzels. I’ll order a regular dinner later if I’m still standing.

> This is a news column, so I have to note that the list of marriage equality states has now grown to 19 with the addition of Oregon (no appeal likely) and Pennsylvania (no appeal at all). Our adversaries are still pursuing an attempt to short circuit the Beaver State in the Ninth Circuit, but they will not succeed, so 19 it is. Plus the District of Columbia of course! I always forget about them.

We also added Idaho to the list of states where we’ve won a federal court marriage victory, but where the ruling has been stayed pending appeal. I have much to say on the subject of these postponements, but in keeping with my pledge to skirt the swampy legal undergrowth, I will resist. The Idaho ruling will be reviewed by the Ninth Circuit in September, and it would be kinda nice if the Ninth Circuit also decided to review the Nevada marriage case that they’ve been sitting on for a couple of years while they’re at it. What’s the hold up, guys?

Meanwhile, the Fourth Circuit heard arguments in May on the marriage case in Virginia, and our LGBT court analysts are—wait for it—cautiously optimistic. Next up, four dates with the Sixth Circuit for four separate cases. And of course, we’re now waiting for an actual ruling from the Tenth Circuit, where oral arguments on Utah and Oklahoma were held in April.

> Oh! I almost forgot about Arkansas! A state court ruling in our favor that was put on hold by the Razorback Supreme Court. Well, the bottom line is that everything is hunky dory in the glorious world of gay civil rights. And even some of our harshest opponents are starting to throw up their hands in frustration and admit defeat.

They’re also a little shell shocked, unable to fathom what seems to them to be an inexplicable 180 degree turnaround in public opinion over the last decade. Part of their problem is that, like Mitt Romney’s supporters in 2012, they were convinced that America was on their side, polls or no polls. Many of them remain convinced of this, despite all evidence to the contrary, blaming Machiavellian gay strategists and the liberal media for their setbacks. America, they complain, has been seduced by happy marriage stories, like puppies in a pet shop window, and the solution is to change the narrative.

But to push the metaphor, that would be like having all the puppies get heartworm and forcing the country to watch them die in their cages. People? America doesn’t want to see that! The assumption that gays and lesbians are sick perverts, once commonly accepted without question, has been permanently debunked for the majority in this country and it’s not coming back.

A TRIBUTE TO OUR HARD FOUGHT VICTORY OVER PREJUDICE

> So it’s Pride Month once again. Yay! You have to wonder, though. What’s going to happen to Pride in a decade or so when we will have won the right to marry (maybe next year) and presumably when we will have outlawed sexual orientation discrimination in no uncertain terms? Do we have to struggle against Shame in order to celebrate Pride?

I’m thinking we can keep it up for the foreseeable future. Even after we’re completely assimilated into American life, we can still indulge in gay revelry as a tribute to our hard fought victory over prejudice.  Indeed, it might be even more important, as our LGBT identity fades over time, once a year to dust off our rainbow flags, drag our plastic penis cocktail glasses out of the closet, put on our March on Washington 2000 T-shirts and hit the streets.

Plus, we’re always going to have gay bars, and we’re always going to be the best partiers. Lately, that’s what Pride has been all about anyway. Hang around. Buy stuff at stands. Sign up for stuff. Check people out. Drink. Listen to music. Watch high school bands, fire trucks, your local LGBT real estate agent, and a politician or two. No one cancelled St. Patrick’s Day just because Ireland got their snakes under control a few centuries ago. So who knows? Maybe June 29 will become a general holiday someday and everyone will wear rainbows.

> I was just hunting around for fun LGBT news stories when I saw a headline about an Indian mother who strapped her 11-month-old baby into a parasailing harness and sent the child a hundred feet in the air attached to a speeding truck—alone. The baby was screaming its head off before and after the flight.

You know, I’m a big advocate of not coddling children. I love the idea of letting kids play on their own, take risks, scrape a knee, swing too high. But hello? The woman is apparently a big parasailing buff and she wanted the little one to conquer its fear at an early age. Now, she might face charges.

So, I didn’t find anything really good in the LGBT category. A lot of stories on Michael Sam, the seventh round draft pick who has officially become the first openly gay player in the NFL. By the way, I think Sam is a great guy but he’s not the gay Jackie Robinson. Jackie Robinson was a star athlete, Sam is not. But he’s gay and he kissed his boyfriend on TV which generated a lot of press. I can’t get that excited for some reason. It’s like the mystery plane from last month. It was interesting for a week, but then the coverage just went on and on and on. For God’s sake! It’s a plane crash. Tragic, but these things happen.

The main problem is that our complicated legal fight for marriage is sucking all the air out of the any other type of gay news. Further, the sort of thing that used to be news is not necessarily such a big deal anymore. For example, back in the day, if I saw a headline about someone fired for being gay, I assumed that an evil employer was to blame. Now, it’s just as likely to involve a litigious slacker who never showed up for work and is playing the victim. I won’t cover it unless the antigay element is clear.

Finally, I can’t cover any sad LGBT stories, because it’s Pride month. It’s a happy season! Plus, I don’t have the space left and I can’t end our time together on a down beat. Ergo, there’s no more news. Nothing to see here, folks. Send in the rainbows.