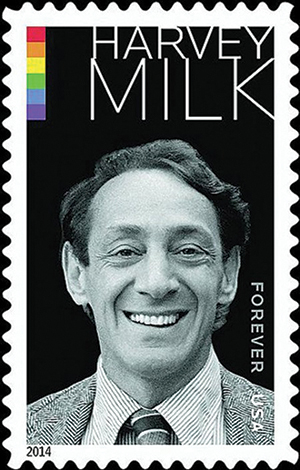 The first openly LGBT elected official to be featured on a U.S. stamp.

> Lines formed at the Post Office in San Francisco’s Castro District last month on Harvey Milk Day, as people rushed to purchase the new Harvey Milk stamp, dedicated to the first openly gay San Francisco supervisor, who was murdered during his service.

A birthday celebration honoring Milk was held at Beaux on Market St. in San Francisco. The stamp’s official first-day-of-issue ceremony took place at the White House on Harvey Milk Day, May 22. Milk would have turned 84 this year.

Milk was one of the first openly gay politicians in the U.S., and the first to be elected to public office in the state of California when he won a seat on the San Francisco Board of Supervisors in 1977, reports www.lgbtqnation.com.

And while Milk served only 11 months in office, he was responsible for passing a stringent gay rights ordinance for the city.

The ordinance extended employment protections to gays and lesbians in San Francisco, and became a model for anti-discrimination legislation throughout California and the nation.

In 1978, Milk campaigned across the state of California against Proposition 6, also known as the Briggs Initiative.

Had it passed, Proposition 6 would have banned gays and lesbians, and possibly anyone who supported gay rights, from working in California’s public schools. The proposition was defeated in the November 1978 election in part because Milk successfully appealed to Californians’ basic sense of fairness.

Despite his short career in politics, Milk became an icon in San Francisco and a martyr for gay rights, and has been referred to as “the most famous and most significantly open LGBT official ever elected in the United States.”

Legislation designating Milk’s birthday, May 22, as a day of “special significance” in California, was passed in the state legislature in 2009 and signed into law by then-Governor Arnold Schwarzenegger.

In 2009, Milk was posthumously awarded the Presidential Medal of Freedom by President Barack Obama. Later that year, Milk was inducted into the California Hall of Fame.

Milk is the first openly LGBT elected official to be featured on a U.S. stamp.