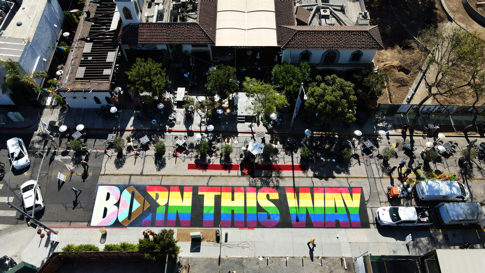 Today, Lady Gaga’s iconic album Born This Way celebrates its 10 year anniversary. To commemorate and recognize its cultural impact, the City of West Hollywood has officially declared May 23rd as “Born This Way Day”, and is celebrating with a street painting on Robertson Blvd in tribute to the LGBTQIA+ community and the album.

West Hollywood Mayor Lindsey P. Horvath presented a Key to the City to Lady Gaga with a note of thanks: “Thank you for encouraging us to love ourselves and be proud!” Concurrent with the unveiling of the colorful street painting is the kickoff of Pride season in West Hollywood with the annual One City One Pride LGBTQ Arts Festival (www.WeHo.org/pride), which runs from Harvey Milk Day (May 22) through the end of June Pride month (June 30).