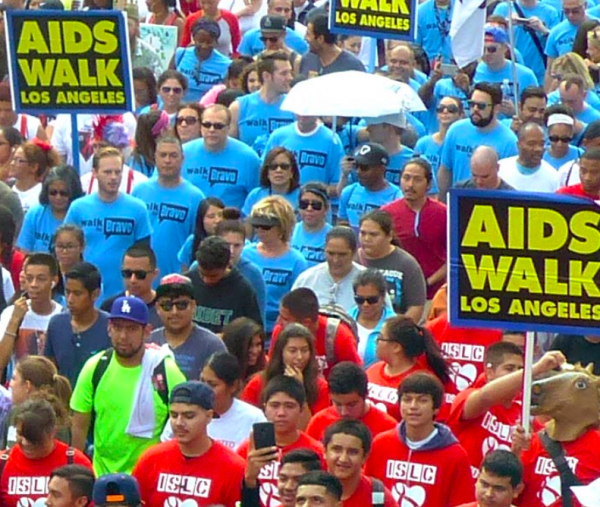 This past Sunday AIDS Walk Los Angeles held its 35th annual walk that raised vital funds that help to build support and awareness of the continuing need to address the HIV/AIDS epidemic. Ten thousand participants, volunteers and sponsors raised nearly $1.6 million. Individuals are able to increase that amount by donating before November 15, 2019.

This year’s AIDS Walk Los Angeles was the first to be managed in-house by APLA Health, which has been the beneficiary of the walk since its inception. The theme for 2019 is “AIDS Has Met Its March,” which calls upon participants to continue the fight in its efforts to make AIDS history.

“Between our first AIDS Walk in 1985 and today, we have seen a lot of progress in the fight against HIV and AIDS. Right now, we have the very real possibility to bring down the number of new infections because of resources like PrEP and educational tools like U=U,” said Craig E. Thompson, CEO of APLA Health. “AIDS Walk LA continues to bring HIV and AIDS to the forefront and raise awareness of its effects on communities in Los Angeles County—the second largest epidemic in the United States. AIDS Walk also helps to raise vital funds that keep people living with HIV in support programs, and increase outreach for our HIV prevention programs. We know that medical care and education will help stop this disease.”

Since 1985, hundreds of thousands of walkers and supporters have raised over $88 million in the fight against HIV/AIDS. These funds remain a vital lifeline to sustain APLA Health as well as other HIV/AIDS health and support organization beneficiaries.

Since 1985, AIDS Walk Los Angeles has drawn hundreds of thousands of supporters to walk, and millions more to donate, raising more than $88 million to combat HIV and AIDS. The funds raised at the event remain a vital lifeline that sustains APLA Health’s care, prevention, and advocacy programs for those living with HIV in Los Angeles County. Proceeds also benefit more than 20 other HIV/AIDS service organizations that are able to participate and raise funds through the Community Coalition Initiative (CCI). For more information, visit www.aidswalkLA.org.

APLA Health’s mission is to achieve healthcare equity and promote wellbeing for the LGBT and other underserved communities and people living with and affected by HIV. For more information, please visit us at www.aplahealth.org.