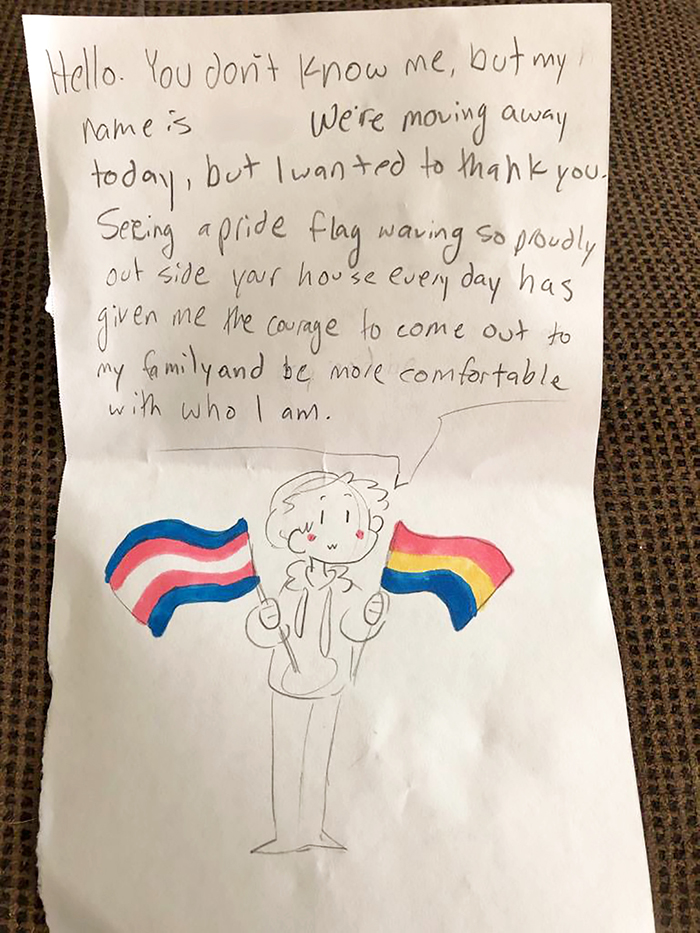 Outside of Austin, two lesbians found an anonymous note from a neighborhood boy who thanked them for putting up a rainbow flag, and told them it gave him the courage to come out to his parents.

Pride will have come and gone by the time you read this, although of course, Pride is with us every month and every day as we join together as a colorful, righteous GLBTQ community to fight for civil rights. Cue: The Pride anthem.What? You don’t know the anthem? Actually, I don’t think we have one. Maybe next year.

I have the usual stories about the struggle to celebrate Pride in various far flung locales where oppression weighs even heavier than it does in Los Angeles or New Haven, Connecticut, from whence I write this month. I am here helping to take care of two of my grandchildren, who are engaged in ongoing sibling battles over a vast range of intractable conflicts. Barbie or Batman? Mac and cheese or ice cream? If the mac and cheese, how much cheese? If the ice cream, how will they get it out of the container?

My entire offering of quesadillas was rejected due to a microscopic addition of sour cream. One child cried for over an hour when she was not allowed to carry a bucket of dirt from the yard into the living room. After they spilled maple syrup and blue paint all over the table, I was ordered to use a coaster for my wine glass. Really kids?

Moving on, in St. Louis, a terrorist maniac named Edward Terry threatened to kill everyone in the local parade in an email to pride organizers that was quickly traced back to the cell phone he had used to create a fake email account. Nice try, Dumbo.

I also read a sweet story about a pride march in Paxton, Illinois, population 4,000, where one local man, Tyger McClure, decided the time was right for his farming community to show its rainbow spirit.

“So many of us had to flee our small hometowns to find safety, opportunity and community in larger cities,” he told the local press. “Those large cities have had pride celebrations for decades. I thought it was time to bring us all to where we began, and where too many young people still feel isolated as they endure hardships. Let us shine the light of pride everywhere.”

Outside of Austin, two lesbians found an anonymous note from a neighborhood boy who thanked them for putting up a rainbow flag, and told them it gave him the courage to come out to his parents.

And around the country, some men are giving out “free dad hugs” at Pride events, including Scott Wherle of Taylor Mill, Kentucky, who gave out too many hugs to count at Cincinnati Pride. “Clearly,” he told a reporter, “there’s still so many people out there that need a hug—that need someone to say ‘It’s going to be OK.’”

Meanwhile, the U.S. Supreme Court is on the verge of adjourning for the year as I write, thankfully rejecting an invitation to review yet another antigay wedding business case, which had been circulating for several months on the petition list.

This was the Oregon case of Melissa and Aaron Klein, owners of “Sweet Cakes by Melissa” or something equally insipid, who declined to make a wedding cake for two lesbians many years ago. Fast forward to being hit with a six figure fine for their repeated antics, the Kleins asked the High Court to reconsider the fine as well as the core issues that the Court sidestepped in the Masterpiece Cakeshop case last year. Happily, the justices declined, although they sent the case back to the Oregon appellate court for another go round in light of the Masterpiece ruling.

What does that mean, you ask? Well, since the Masterpiece opinion relied on a technicality to avoid coming to any conclusions on whether religious actors can ignore civil rights laws, it was somewhat meaningless for the justices to send the case back to lower court with Masterpiece in mind. Indeed, the High Court already sent a similar petition back to a lower court with the same instructions last year, telling antigay florist Barronelle Stutzman to return to the Washington Supreme Court. The Washington Supremes obliged, and last month they unanimously ruled against Stutzman for the second time, noting that Masterpiece provided exactly zero additional insight into the legal context of her lawsuit. Let’s hope the Oregon appellate court agrees.

In any event, that’s one less hazard we face on the Supreme Court’s 2019/2020 docket, when we will have to negotiate the dangerous questions of whether gays or transgender men and women are protected against workplace discrimination under current federal law. Without rehashing the underlying issues, let’s just say that the potential for disaster a year or less from now is  frighteningly high.

In some good news on the legal front, the U.S. Court of Appeals for the Ninth Circuit recently said that transgender bias should be granted heightened scrutiny by the courts in its wide jurisdiction. Ruling—oh my God. My granddaughter Teddy has been reading over my shoulder. Now, the word “font” on the side panel of my word processing program has reminded her that she has never had “fondant” before, but she has had a kitty-cat cake, this is all being related to me right in my ear while I’m trying to discuss the transgender military case, and further, it’s possible that her brother extended the Batman program while we weren’t looking and that it might actually be time for Barbie. Shall we cry about this? The answer seems to be yes.

As I was saying, the Ninth Circuit ruling came in one of the four legal challenges to Trump’s ban on transgender military service, a spontaneous decision popped into our lives through a random tweet two years ago July. Not surprisingly, four courts put a hold on the “policy,” which eventually morphed into an official Defense Department edict from Secretary James Mattis. The Mattis version of the ban has been given a little more credence by the courts, including the U.S. Supreme Court, which has said the Mattis policy requires additional evaluation.

In Seattle, Judge Marsha Pechman dismissed the Mattis plan as not significantly different from the Trump tweet, and it is her ruling that was just overturned by the Ninth Circuit, albeit in a nice way. True, the appellate judges said the Mattis ban should be given some weight, but by ordering “heightened scrutiny,” a term of art, the Ninth Circuit requires the government to present “exceedingly persuasive” justification for its actions. That is basically impossible, not just for the Seattle defense, but for any and all instances of transgender bias under investigation in any other court within the Ninth Circuit’s jurisdiction. That, my friends, includes the nine states; the entire west coast, Hawaii and Alaska.

Over at Cracker Barrel, I was interested to learn that their CEO, Sandra Cochran, has not only increased the company’s share price from $40 to $170 in the space of eight years, but she has done so while changing the corporate culture from abysmal to semi-admirable. Once known for blatant racism and a general bad attitude towards minorities, including us, Cracker Barrel has raised its Human Rights Campaign gay friendly rating from 15 in 2008 and 35 in 2011 when Cochran took over, to 80 this year. As the share price suggests, diversity pays.

The positive development comes to our attention now because a Cracker Barrel in Cleveland, Tennessee, just cancelled a church meeting in the restaurant after the pastor who set it up said GLBT people were “freaks” and “worthy of death.”

“We disagree strongly with their statements of hate and divisiveness,” the restaurant said in a statement. “We serve everyone who walks through our doors with genuine hospitality, not hate, and require all guests to do the same.” Hey. It’s not exactly a high bar, but it just reminds us to reexamine our assumptions from time to time.