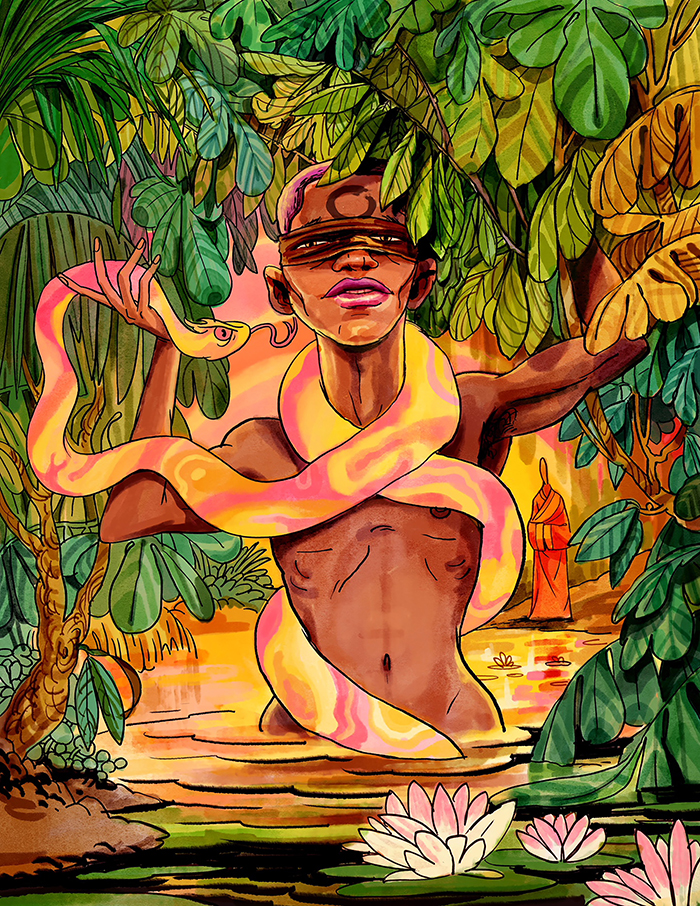 One trans man’s journey in recovery. “All heroes go through turmoil or hell in order to emerge changed on the other side.”

We are all heroes, though dormant some times. Waiting, many of us, for something or someone to rouse us from our slumber, to give us our quest and to aid us in defeating our foe. Our adversaries usually take a form starkly similar to our own and are driven by a similar force. Far from the known, betwixt within the brambles and twists, a woesome Dragon stirs deep, deep down within us. Once defeated, literally all other material foes pale in comparison.

We all, every one of us, has an innate destiny to be the hero of our own lives. Waking up and breaking through to a newer understanding of who we are and whom we choose to become, again and again.

I have had the honor, for the past 20 years working in the addiction recovery world, to witness this epic struggle daily, up close. My colleagues and I have had the privilege to usher hundreds of would-be, could-be, should-be heroes toward their ultimate path of catharsis and transformation.

Many times the story ends badly. Too often, the hero never reaches the point of defeating her nemesis. Many times, the hero gets lost in the labyrinth or the dark forest and is never seen or heard from again.

However, sometimes, against insurmountable odds and uncanny turns, the hero looks deep within and vanquishes the darkness.

This is the story of one such Hero.

I went to several rehabs. Getting shoved around from one rehab to the next—basically being sold and ransomed. Also being the only trans person and people being weirded out by it was awful. Harassment was a major issue and being the only one of my kind didn’t help.

Phoenix Ra knew from an early age that he was born into the wrong body. His heart and soul felt like a man’s. Yet, he was born with girl parts. When he was three years old, young Ra found himself at a child care facility. Unhappy because his mom had dressed him like a girl, again. However, now Ra had a plan. He had noticed that when the other kids had accidents in their pants, the caregivers would put them in GI Joe Pull-Up diapers. Mom thought Ra was a very slow learner because he soiled his pants daily at the care center. Ra, the quick learner, smiling proud as he pulled up his GI Joe Pull Ups feeling like the man he knew he was… or boy rather.

In our interview Ra talks about his personal journey, getting shoved around from one rehab to the next and finding his inner power.

All heroes go through turmoil or hell in order to emerge changed on the other side. Can you describe a little bit about your own personal struggle through hell and back?

Hell for me was when I started living like I didn’t care if I lived or died. This wasn’t at all like being really suicidal and acting on it right away. It started as simply not minding a minor risk here or there. Eventually, the great risk became a necessity.

You mean the little risks weren’t risky enough so more risk was needed?

Yeah because I had a death wish but I wasn’t really suicidal. I just did things that carried more risks.

At what point did you decide you descended too far?

When I couldn’t get the usual satisfaction from my descent. I had everything set up just right and no result. I no longer recognized myself and I was too deep to ask for help. No one would understand.

Was there a specific moment?

I was about to try injecting meth for the first time. I’d always only smoked meth up to this point. The people I did shit with were at my house and they weren’t listening to me when I asked them to be nice to my house or property or whatever.

They were abusing your things?

Yes. I flipped out and kicked them all out. I made a call to a hotline thinking I could just talk to someone about it and still go to work the next day.

At what point did things begin to have some light at the end of the tunnel?

Not for another year. I went to several rehabs. Getting shoved around from one rehab to the next—basically being sold and ransomed. Also being the only trans person and people being weirded out by it was awful. Harassment was a major issue and being the only one of my kind didn’t help.

How do you identify today? As straight or transgender?

Both. Or a queer man since I do date other trans folk as well. We tend to understand each other better than any others. But, I’d be concealing a major part of myself if I just identified as a straight man without trans experience.

Does concealing who you are bother you?

In a program that requires honesty, sure.

So you practice AA?

No. It was never for me.

What “program of honesty” do you refer to then?

What I learned at Zen Recovery Path, what I brought there with me, things I have learned since. It’s an amalgamation really of several bits and pieces I pieced together to form my personal program. And I keep myself busy with setting up habits and obligations that require my sobriety.

You built yourself from scratch in many ways. Did you know who you wanted to transform into all at once? Or was it a gradual process

I remember praying to God that I’d wake up a boy when I was around 3 years old. I think I thought of myself as wanting and actually having the traits of my heroes innately. Like they understood me or I understood them.

Not many men get the chance to construct themselves from the ground up. You had an amazing luxury.

I never really understood it as a luxury, considering how long and difficult it has been. I guess that is something I can appreciate now though. Looking back.

Was it worth it?

Lots of folks, I am sure, would love the chance to build the “perfect” man.

I’m still trying to figure out what the “perfect” man is.

While in treatment, Ra had an appointment to go to at his doctors regarding the upcoming surgery. He had planned to have a “real” phallus constructed using the flesh from his forearm. The doctor was firm. “5.9 inches is the maximum length!,” he said. “No larger!” Ra was aghast, “5.9 inches?! I am black man reborn! I can’t have a 5.9 inch dick!” The doctor explained that anything larger and it may fall off. Awkward. He demanded a second opinion.

Ra: “I didn’t want to have some new body dysmorphia issue to add to the list ya know?! Didn’t want to be like oh damn it I went too small. Or oh shit this thing is a behemoth!”

Did you end up finding a new doctor?

I actually did end up going with that doctor but we had to butt heads about size until he agreed and actually gave me more than I asked for… My lack of experience with penises in general had me slightly confused myself about what would be a reasonable size. (Ra laughs). It was definitely a laugh to keep from crying sort of experience. I asked everyone I could to be honest with me about it and not to just placate some general agenda for appeasing the sensitive topic of size. The responses I got from the women I asked sort of surprised me. I previously had the impression from mainstream culture about an obsession with size and that it ultimately must matter if everyone was trying so hard to say it DIDN’T matter. To the contrary, the women I spoke to said “not so much.” I’m happy to say I have zero dysphoria to speak of, at the moment.

Heroes never return the same. Something about them is changed during their saga. It is difficult to go to the depths of hell and back and return unchanged. There are scars.

Not all heroes can manage to weave together what they experienced on their Hero’s Journey and their former life. The Returning Hero must brace himself for the impact of the common world. The Tao Te Ching expresses that it is impossible to explain the experiences of the life-altering Tao and to communicate it verbally. It is a Way that is lived, not spoken. Same for the Returning Hero.

Has it been difficult to explain your experiences to others?

With others I find it hardest to share the emotion or raw weight of what has happened. There’s so many layers twists that I had to experience. I don’t know if it’s something that can be understood without being in it.

What is your next quest?

The quest for now is commitment to the choices I have made. It’s been a bit overwhelming, so I know I’m learning something right now.

Do you feel empowered?

How was it before?

I felt disempowered, most of the time. Hopeless and helpless to change whatever really mattered.

I remembered, while still in treatment, Ra said he felt like he was born into a powerless set of circumstances. What struck me then was the way Ra told me he wanted power. He said it with a dragon’s smile. Something akin to avarice, like how a dragon hordes his gold and his virgins but cannot really do anything with either. It felt like he plotted to seize power at the first chance.

However, now, his power felt genuine. Secure. He felt more contented. The power he exuded now seemed cultivated from within instead of seized from without. Ra WAS powerful, as opposed to grasping for power. The hero had returned home. Boon in hand.

May I see your penis?

Thank you for allowing me to share some of your story.

I appreciate you taking the time and genuine interest.