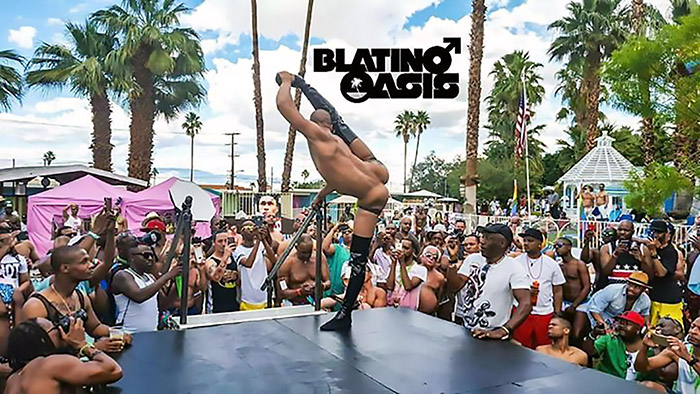 The Globe Theater, 740 S Broadway, Los Angeles. 7pm. More info: losangelesleatherpride.com. The class of 2017 assembled and ready to show you why they earned the titles they represent. Followed by Legion Leather Dance Party.

THE UNCONVENTIONAL CANVASES OF KEITH HARING

Petersen Automotive Musem, 6060 Wilshire Blvd., Los Angeles, California 90036. 10am-6pm. Ongoing through June 4. At the foremost proponent of Southern Californian car culture, The Unconventional Canvases of Keith Haring is the first time that these five works have been shown together.

ONE National Gay & Lesbian Archive, 909 West Adams Boulevard, Los Angeles, CA 90007. (Tuesday thru Fridays: 10am to 6pm Saturdays: 10am to 5pm closed on Sundays  & Mondays.) Info: http://one.usc.edu/die-kranken/. A group of artists formed in 2015 in response to the extensive holdings on gay motorcycle clubs in Southern California housed at ONE Archives. Taking its inspiration from these outlaw clubs, die Kränken’s projects examine the significance and complicated history of these motorcycle groups through a variety of multimedia and performative strategies.

West Hollywood Library, 625 N San Vicente Blvd., 7:30pm. A documentary about three female chefs and restaurateurs who shatter the glass ceiling in the California food industry as they risk everything to achieve their culinary and entrepreneurial dreams.

Renberg Theater, 1125 N. McCadden Place, 7:30pm-10pm. The world theatrical debut of the Trans Chorus of Los Angeles (TCLA) and their performance of the planet Earth’s first staged concert production of the full The Rise and Fall of Ziggy Stardust and the Spiders from Mars by David Bowie.

Book Soup, 8818 W Sunset Blvd, Los Angeles, CA. 7pm-10pm. Tickets & Info: http://www.booksoup.com/event/john-waters-signs-make-trouble. From an icon of popular culture, here is inspiring advice for artists, graduates, and all who seek happiness and success on their own terms. So what if you have talent? Then what? This is a book signing only.

DINING OUT FOR LIFE – LOS ANGELES

For more information visit diningoutforlife.com/losangeles. Join participating restaurants with your family and friends for breakfast, lunch, or dinner, and a portion of your check will raise funds that help APLA Health and Project Angel Food provide food, nutrition education, as well as essential medical care and social support services, to thousands of people living with HIV/AIDS.

Palm Springs, info: www.blatinooasis.com. A sexy alternative getaway for gay and bisexual men of color from around the world. Socialize, party, and chill with adult men of all ages, in an environment that is more than just a place where you will feel welcome, but a place where you can feel comfortable being just who you are, without shame, without judgment.

THE DRAG QUEENS OF COMEDY

10am-4pm. Tickets & Info: http://rupaulsdragcon.com/about/. Spearheaded by RuPaul and World of Wonder Productions, RuPaul’s DragCon provides a platform for fans of all ages and backgrounds to meet and interact with world-renowned celebrities and icons in a friendly and accessible environment.