Easter In The Desert | The Fight Magazine 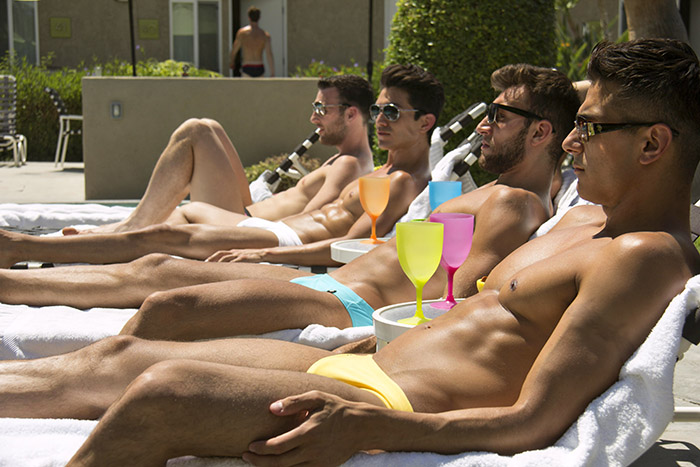 INNdulge kicks off spring with their annual Easter Bonnet Brunch.

Now through May is the high season in Palm Springs, with temperatures averaging in the 80s, but it’s not only the lovely blue skies that attracts gay visitors.

The vintage resort town with its midcentury-modern architecture is more refined than Vegas, yet more reposeful than Los Angeles with plenty to do, from its hot springs, to its stylish hotels, to its golf courses and spas. It’s also a hiker’s paradise with numerous hidden trails along the Coachella Valley and the shopping (downtown and on El Paseo Drive in Palm Desert) cannot be beat!

“There are tons of bars, restaurants and nightclubs catering to the large gay crowds,” says Jon Jackson, owner of INNdulge, one of the city’s most popular gay resorts. “In addition to the thousands of gay tourists that come here each week, nearly half of the residents are gay. Palm Springs really is the desert playground for gay men and women.”

Perhaps its because spring is in its same, but the city has a special affinity for the vernal equinox. “The entire city comes alive with fun,” continues Jackson.

For many guests coming from New York City and other eastern parts of the country, it is their first taste of the sun in months. “We plan a lot of exciting weekly events, culminating in our annual Easter Bonnet Brunch. On that day, we hide eggs, candy, trinkets and everyone dresses to the nines, displaying their wildest bonnets!”

The first year was a complete surprise for guests who woke up on Easter morning to a courtyard—prized for its immaculately landscaped lawns and walkways with large modern figure sculptures by artist Mavis McClure—decorated with ribbon and glitter. Guests were offered fabric and glue guns and encouraged to make their own bonnets that first Easter. Today, guests are in-it-to-win-it, arriving to the brunch with their pastels bursting and their bonnets ready to impress.

“We love that the Easter Bonnet Brunch has become one more opportunity for INNdulge to be the backdrop of lifelong memories for our guests. It’s become an event many look forward to coming to year-after-year to celebrate the season.”