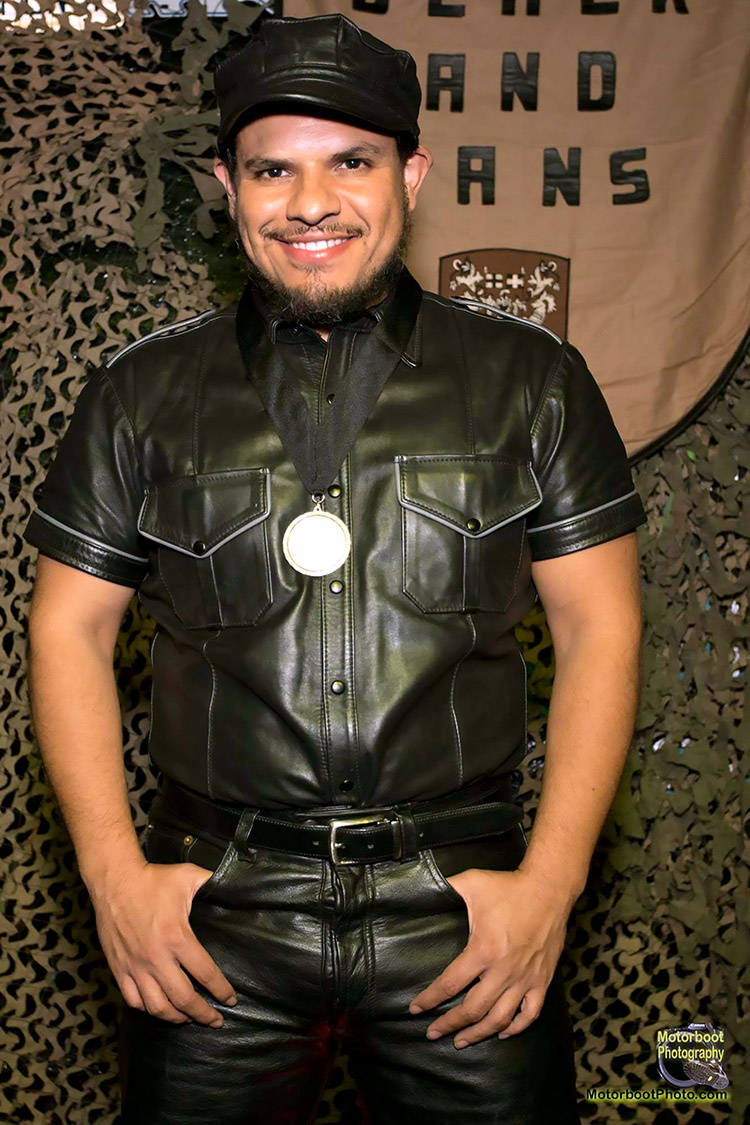 Mr. Regiment 2017 Marco Valadez: “Sex is a gift that should be explored and enjoyed, not hinted at behind closed doors.”

Marco Valadez won the title of Mr. Regiment 2017 of the Black and Tan Club last month, and will compete for the coveted Mr. LA Leather 2017 title next year.

“Winning means that I have the opportunity to represent a community from my perspective, and it gives me a chance to reach out to people at the margins of the leather community,” said Valadez in an interview with THE FIGHT.

“My story of being a leather man will come from a sex positive, socially conscious, and freely expressive place,” states Valadez. “Winning Mr. Regiment 2017 means that I now have a group of men who are just like me: confident, sexually expressive, smart, outspoken, and passionate about life—all qualities I possess and now share.”

“At the age of 16, I was introduced to West Hollywood and was taken to a book store,” reveals Valadez. “In the book store, I was pulled by curiosity to a Tom of Finland book, and it was at this movement that my attraction to hyper masculinity and men in leather emerged without actually knowing it. So in retrospect, I was involved in the leather community since I was 16.”

Born in Mexico City, Valadez and his family migrated to the US when he was 6 years old. “I grew up in a pretty bad neighborhood in the San Gabriel Valley—with a lot of gangs, violence, and drugs. As a teenager, I had two friends pass away—one committed suicide and the other was shot.”

“I think it is important for LGBT people of color to take space in corporate environments in today’s homophobic, racial social structure.”

With the support and encouragement of his family, Valadez graduate High School and went to USC.  “I double majored in Economics and American Studies & Ethnicity with a minor in Business Entrepreneurship. I was very involved in leadership and was even the President of the Latino Business Student Association. I graduated with honors and conducted my own honors research project which was published.”

“Today,” reveals Valadez, “I work as an analyst at a bank. I deal with Corporate Governance, Risk & Compliance. I also work with Information Security, Business Continuity and Disaster Recovery as it relates to contract management. I love what I do because I think it is important for LGBT people of color to take space in corporate environments in today’s homophobic, racial social structure.”

As Mr. Regiment 2017 Valadez says that he is “passionate about helping individuals in the leather community. What I mean by this is that I want to be able to financially assist people that are experiencing financial difficulties.”

Additionally—states Valadez—“some activities that I see myself engaged in as a title holder are having sex positive events… I want people to see sex as a gift that should be explored, enjoyed, and not hinted behind closed doors. I think that everyone should have the sexual freedom to do what they want as long as it is between consenting people and that these people know what they are getting into. Overall, I want to help raise money for the LGBT community while people enjoy and express their sexual identity without shame.”