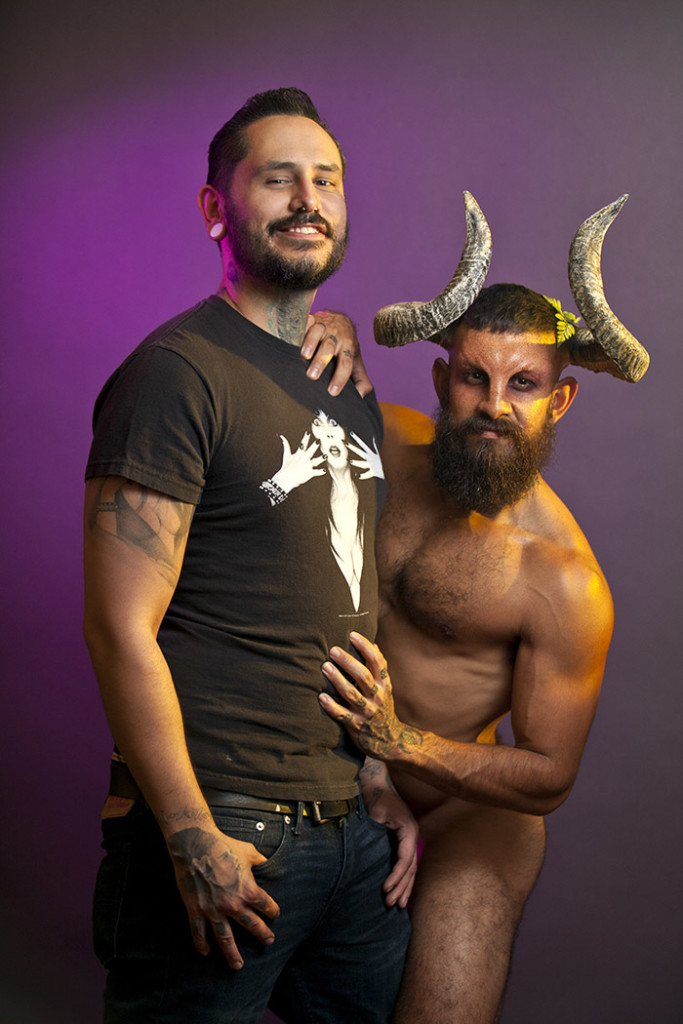 Face Off’s Gage Hubbard on working in the field he loves and the moment in his life when he realized that being “uncool” was cool.

Make-up artist, Gage (“Munster”) Hubbard knew early on that he wanted to make monsters. “I was 6 years old when I decided to focus on monsters and makeup. I always related to monsters in movies. I felt, and still feel, especially with the older universal films, mainly ‘Frankenstein,’ that monsters where only considered as such because of the fact that they were different and misunderstood.”

In an interview with THE FIGHT Hubbard talks about his appearance on the first season of “Face Off,” the moment in his life when he realized that being “uncool” was cool, and his one and only Hollywood crush.

For the most part. I had a very difficult upbringing and come from a somewhat of a broken home. I don’t think my parents nor the people around me in terms of classmates knew what to make of me. I was made fun of almost every day growing up. But I was like the illegitimate love child of John Carpenter, Wes Craven, Edger Allan Poe and Walt Whitman… [laughs]. I didn’t have any friends until later in life when being “uncool” was cool. I always viewed the monsters in the films I watched as my friends.

How did your family react to you being gay?

They didn’t care, but I also didn’t ask for their permission. I’m very independent and moved out on my own when I was 16 due to a bad home life. So when I came out at the age of 23, I had zero fucks to give as to whether anyone accepted it or not. I had been on my own and asked my family for so little over the years that if they didn’t accept it—that would have fine by me.

Have you ever gotten to work on or with somebody you idolize?

You know it’s funny, I’ve gotten to meet and work with countless talented people over the years, from actors to other makeup artists, musicians to directors and cinematographers! I can’t say I really idolized anyone, however I do and did look up to many of them and their work. Makeup-wise I would say Ve Neill (Beetlejuice, Edward Scissorhands), Greg Cannom (Lost Boys, Vamp, Benjamin Button), and Steve Johnson (Species, Ghostbusters, Night of the Demons).

Do you have your own stories and characters that you’d like to bring to life?

Good question, and the answer is hell yes! I have a lot of different ideas all the time for cool and interesting characters. I’m working now as we speak on a coffee table style art book filled with many of them and I also have been writing my first screen play for rad horror film that I would love to see as a genre fan!

You were on the first season of Face Off, how did that experience change your life and your career?

It changed a lot in my life! I had been living in Los Angeles for 5 years at that point struggling in what was then a dying industry, still is very, very niche. I had been struggling to make a name for myself and had a part time job working for H&M and doing makeup gigs just to make my ends meet. The show helped me establish myself and put my art out there for the world to see. It helped people understand what exactly a “special effects makeup artist” is and does, which trust me—not many people knew prior to the show. I started working more steadily and was able to quit that part time job and just do effects makeup full time! I got to work with amazing artists on amazing things and do more then I ever thought I would! I owe the show a lot for that reason and I am very grateful and extremely humbled for the opportunities it’s provided me.

You have a lot of tattoos. What’s your next tattoo? How old were you when you got your first tatt? Do you have a favorite tattoo? Do you have a tattoo that you regret?

I was 21 when I got my first, Frankenstein, on the back of my left hand, then it slowly grew from there. Next will be Christina Ricci’s Wednesday Addams, followed by Michelle Pfeiffer’s cat woman. I have ZERO tattoos I regret as they are all characters from films that inspired and continue to inspire me.

You work with an FX shop. What is that like?

I work for a company called Immortal Masks. We specialize in state of the art silicone masks. I’ve been very good friends with the owners of the company for a very long time. It’s very much like a small tight little family there, I truly love it. I love the people I work with and am truly fortunate to be able to go to work with people I love every day—doing what I love, making monsters.

Do you prefer working on set more or working in the shop?

I love both for various reasons. Life on set can get extremely stressful, and you’re more often than not dealing with politics. However, that is where you get to bring characters to life. In the shop it’s more mandated and or routine, therefore more relaxed and enjoyable. So I would have to say I love both for those reasons.

Who have you not worked on that you’d kill to get into your chair?

Michelle Pfeiffer… Or Tom Hardy. He’s my one and only “Hollywood” crush.

It’s Halloween, is this your favorite time of year?

Yes OF COURSE!! My favorite time of year and my favorite holiday! It’s kinda Halloween all year round for me though.

Do you have a costume picked out?

I don’t yet, but usually I don’t until the day of. I always end up dressing up all month long as well as do other people’s makeup all month. We’ll see what this Halloween brings!