GO-GO Dancing In The USA [cover feature] | The Fight Magazine 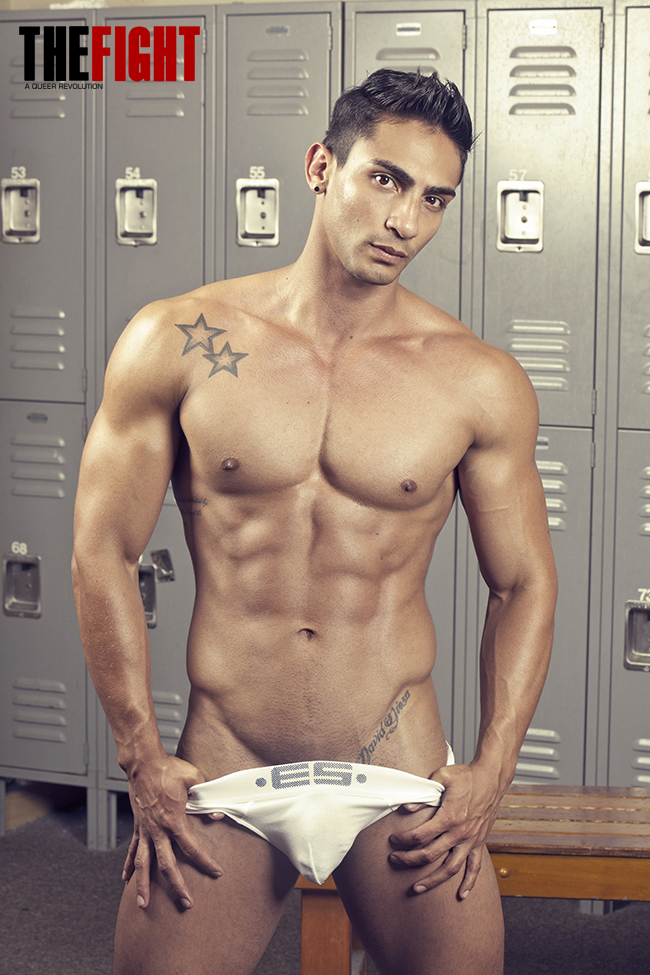 To say that David Rest’s life hasn’t gone according to plan would be putting it lightly.

Rest, 25, one of the main dancers at this year’s White Party in Palm Springs, came to the U.S. from Columbia two years ago with a clear objective. He would live in Atlanta for six months to practice his English, and go back home to put his degree in international business to good use. And that’s how it would have gone down if he hadn’t found the love of his life—adult film entertainer, Trenton Ducati, founder of Ducati Models.

They got married six months later. Rest left behind his car, family, friends, and his business degree to give marriage and go-go dancing a go.

“Gay life in Colombia is not as open as it is here,” explains Rest. “You don’t get into trouble with the government for being gay—but I lived there as a straight man. Once I came here, I felt free. Every city has their gay area. People are more open. I love it.”

Rest, raised in a religious household, has not come out to most of his family. “I know that my mom doesn’t like gay people, she’s very Catholic. We know somebody who is gay, and when she talks about him, she quotes the Bible and she is not too friendly. I have two brothers—I’m the oldest—I don’t know how accepting they will be about me being gay.”

Some family members, however, have been more open, says Rest.

“I have a cousin who came to visit me in San Diego recently. She didn’t know about me, but she wanted to stay with me for two to three days and have me show her around. I worried about what I was going to tell her. I told Trenton to lie for me and say that he’s my roommate and I told him he couldn’t hang out with us, but when I saw her, I changed my mind, and I told her everything. She simply said OK. So once she knew the truth I was able to relax. We hung out in Los Angeles, saw the sights and at night, I took her to The Abbey and gay places. I think she had fun. She’s 22, so being young makes her more open, but someone older than me like my uncles or aunties, they are not very open. I thank God that I showed my cousin my real life. It was a big step for me…”

Being a go-go dancer is another issue Rest feels that his immediate family would have a problem embracing.

“In Colombia we don’t have go-go dancers. We have strippers and that’s different from a go-go dancer, so when my friends found out I’m go-go dancing in the USA, they thought I was a stripper, like a prostitute… I wish everybody in my country could come here to see what a go-go dancer does. Go-go dancing is one of the best things that happened in my life. I get to travel. They pay for my hotel. I get paid to work. They take me to Vegas, New York, San Francisco… I’m not a party guy, but I love meeting people and having different experiences.”

Married life, says Rest, has been a wonderful experience. “It was the best decision I made—ever. Trenton is the most important guy I have in my life. We are happy. We have a very good relationship.”

When asked if Ducati’s line of work in the adult industry was ever a problem for him, Rest claims that he manages to separate between the fantasy and real life.

“I don’t really care about what people think,” says Rest. “His family supports him and they support me. I’m not a sensitive guy. People will always have something negative to say —whether it’s you’re too fat or too skinny or too whatever… People can think whatever they want. It’s my life. I love my life. I’m very happy. I’ve never had a moment where things got bad and I wanted to go back to Columbia.”

Rest is definitely excited about dancing at the White Party Palm Springs this month.

“For me it means a lot. When I posted that I was selected as one of the main go-go dancers at the White Party, other dancers were like, oh my God, who can I contact to dance there? A lot of people want to work that party. I was lucky. I heard that White Party is the biggest event here in the USA, so I’m very happy.”

As for the future, things seem to be moving in the right direction for Rest, with new job offers tumbling in.

“In any job you do, you always want to feel like your growing and moving up. I’m happy I’m not the kind of dancer that dances in the same bar every weekend. Also, in my country I never thought I could be a model—I wished, but here they like something about my look, so I’m getting a lot of calls from photographers and getting calls to dance in Australia, Guatemala and Canada, so it’s really cool, because I’ve never danced in a different country outside of the USA. I really love what I do and I want to keep dancing.”