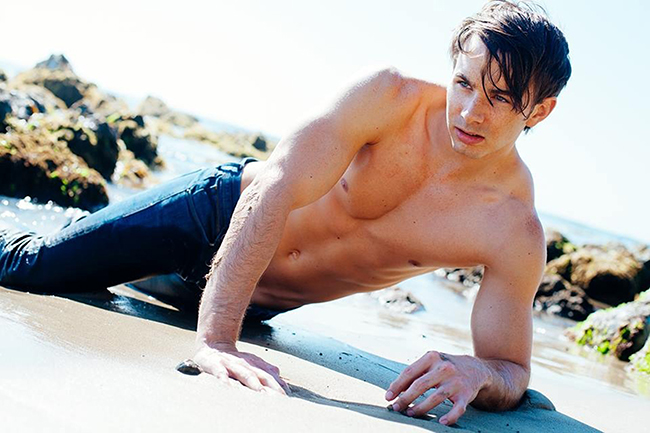 Addison Graham on making it big in Hollywood, harsh realizations and how he found his true self in the desert.

The surprisingly shy 30-year old Colorado native moved to Los Angeles over eight years ago with dreams of making it big in Hollywood, so to speak.

At first, reveals Graham, he assumed that being an adult film star would be a profitable venture—however—as time went by—he realized that assumptions and reality do not always mesh.

“I thought if I did this that I would be able to support myself into retirement,” he says, “but as I got more and more into it, the shoots were further and further apart… I was working less frequently and the paychecks would get smaller, because I wasn’t the new kid on the block anymore. The idea is that they’ll pay big for the new guy that’s never worked before and then it just goes away.”

“I’d be on set and someone will tell me, ‘oh we need you to do this, or else we won’t pay you,’ and then if the scene doesn’t work out, then you don’t get paid. I was doing a scene and it went on for a really long time and we couldn’t finish by the cut-off time. My scene partner and me had been having sex for hours, but because we didn’t finish by 5 o’clock, we didn’t get paid. That really opened my eyes,” states Graham.

Manipulation aside, the actual money shot didn’t seem to pay off. “The money is not nearly what I thought it would be going in,” he says. “The amount always got smaller. Like in my first film I was paid around $4,000 for a scene. And by the time it was two years later, I was getting offered $1,000 per scene, which is good because there are guys out there who are doing it for $500. Still, it’s so not worth it.”

Graham hoped he’d get to travel and make club appearances, but he quickly learned that a lot of the money made by adult film stars comes from escort services—something he was unwilling to do.

Today, Addison Graham prefers the simple life Palm Springs has to offer, where there is less traffic, the gay community is friendlier and the job market isn’t so cutthroat.

“I work at Streetbar—it’s a great local bar. All the employees and the owners and the management—we’re kind of like a family… Right now I’m a bar back—working my way up to be a bartender. I’m lucky. The owner—Dick Haskamp—takes good care of his employees.”

“There are a few fans that I keep in contact with via email and they’re really supportive about whatever I decide to do next,” he says. “I’m still doing gay erotica movies that have plenty of nudity—just no sex. I’m shooting a movie that’s being distributed by TLA video, just like I’ve done before, but right now I’m mostly focused on becoming a bartender.”