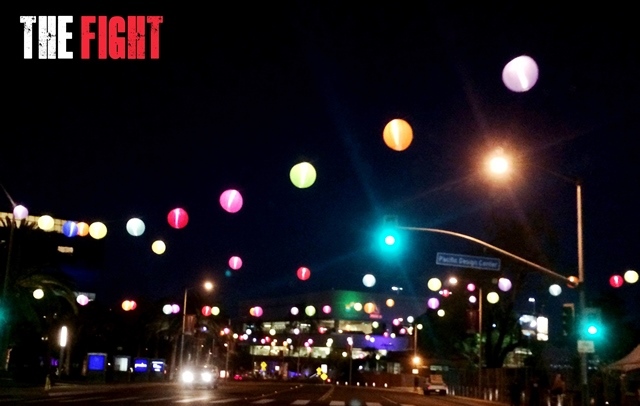 Photo and Text by Paulo Murillo

Colorful lanterns lit the night sky on San Vicente Boulevard in the heart of West Hollywood as Christopher Street West formally kicked off TLBG Pride with a community celebration on Wednesday June 4.

The Community Pride Kick-off Celebration at the West Hollywood Library offered an open tour of the library, Art galleries, food trucks and live music and a special screening of “Love and Marriage, In Small Doses,” a series of short films hosted by Outfest.

The 2014 LA PRIDE Celebration in West Hollywood will take place between Friday, June 6, 2014 and Sunday, June 8, 2014, bringing together more than 50,000 members of the LGBT community and allies to celebrate pride and unity. Produced by Christopher Street West and sponsored in part by the City of West Hollywood, the celebration will include the PRIDE Festival at West Hollywood Park, as well as the Dyke March and Lavender Menace Celebration of Women. In addition, the PRIDE Parade along Santa Monica Boulevard in West Hollywood is one of the largest gay pride parades in the country. Concurrent, is the City’s One City One Pride Arts Festival, which offers events throughout the month of June celebrating marriage equality with the theme “I Do.”

On Friday, June 6, 2014, the WeHo Dyke March & Lavender Menace Celebration of Women will take place at West Hollywood Park, located at 647 N. San Vicente Boulevard. A social hour and presentations will begin at 6 p.m. and the Dyke March will begin at 7 p.m.

On Sunday, June 8, 2014, the PRIDE Parade will take place. It steps-off at 11 a.m. from Crescent Heights Boulevard and travels westbound along Santa Monica Boulevard just past the main entrance of the festival at San Vicente Boulevard, ending at Robertson Boulevard. With more than 400,000 participants, spectators, and marchers, this emotionally charged experience is not to be missed.

The City of West Hollywood has launched an interactive map of Pride Month events at www.weho.org/pridemap.