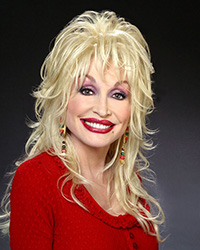 In an interview Dolly Parton conducted with NewNowNext  about her new Netflix series Heartstrings –  the interviewer asked about the dance album Dolly has teased her gay fans with for years.

She let a few more details slip, including how she has written another song for the eventual queer classic: “I have a song ’Dance With My Darling,’ so I may at some point put that out. Because I had a song written years ago, ’Just a Wee Bit Gay,’ and it’s really uplifting and fun. So this might be the time I do a whole dance record.”