We Are Family | The Fight Magazine 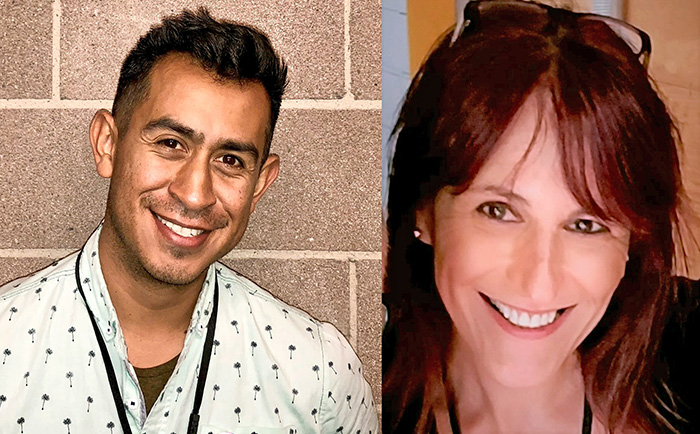 The LA LGBT Center in Hollywood offers an abundance of support and social networking groups.

In an interview with THE FIGHT they talk about the Center’s locations and resources, services geared towards the Spanish speaking community and the difference between online support and in-person meetings.

Thank you both for meeting me today…First off—how many support/networking groups are there at The Center?

Cain Andrade: Currently there are six groups at the Village and one at the Mi Centro sight in Boyle Heights for Spanish speakers.

For those unfamiliar with The Center can you tell us about the different locations and the resources?

Gina Bigham: The Center has several locations. The main headquarters is the McDonald Wright building in Hollywood which is slowly turning into a full medical building with a pharmacy, trans health center, women’s health center, HIV prevention, and HIV care resource. The Village is our community center, where we have 2 theatres, a full working art gallery, meeting spaces and classes—workshops and groups all meet here. The Youth Center on Highland is our transitional living program for young adults making their way out of homelessness.  Our satellite locations are in West Hollywood which is mostly a testing spot, and Mi Centro which is in Boyle Heights and is in its third year.

Andrade: Mi Centro is geared more towards the Latino community… Many services are not offered in Spanish which leaves such a large portion of the LGBT community with no services directed towards them.

What type of groups are offered at The Center?

Bigham: There’s Men’s Speakeasy which is for gay, trans and queer men. Herstory, which is similar to the Men’s Speakeasy but a feminine version for queer and trans women. The Transgender Perceptions group—strictly for trans people. We also have a special first Friday of each month which is what we call S.O.F.A. night which is an acronym for Significant Others, Friends/Families, Allies. And so on those first Fridays our group members can bring outside guests to come and join the conversation.

We also have a group called BioSphere for the bi community which meets bi-weekly—and we didn’t plan that out. Haha. All these groups are drop in and free. We pass around a donation envelope at the end. If you have money to donate—great. If you don’t there’s no pressure or problem.

We do have two groups that are a little stricter about attendance and those are our Coming Out Workshops—Men’s Coming Out and Women’s Coming Out… The program takes about six months and the goal is that you come in knowing that within that six month period you are going to get yourself to a place where you are able to come out to yourself and to others… It’s a more focused workshop where as the drop-in groups’ topics cover a variety of things.

How does one sign up for the Coming Out Workshop?

Andrade: Anyone can call the phone number that’s available on our website (877-OUT-4-LIFE)… A lot of the times it’s a very heartbreaking and really challenging call for them to make, because it’s probably taken them months and who knows how long for them to really make that first decision to come out. And then once they make that call and I speak to them—we go over some of the guidelines of the group, and what it offers, and how it works, and then I tell them when the groups are available and invite them to join.

What would you say to someone who feels too afraid or nervous to make that call or come to a group?

Andrade: Surprisingly, people continue to feel like they’re the only ones that are going through this… If I can just encourage them to come once and have them be surrounded by people like them, people who are able to laugh and cry with them about the journey they’re going through—then they start to crave more and more community.

Can you talk a little about the need that these groups fill in a time when social media has made queer people technically more visible to each other than ever?

Andrade: What these groups offer is a different way of connecting that you can online or in the clubs. It offers a place for people to have conversations that they might not be able to have with their friends or parents…

Bigham: Online support can only take you so far. I think that human connection is where the real work is getting done and where the real progress and support can happen. Me, personally—I’m not a big fan of social media because it seems so combative and so often less than ideal for support… You’re not going to get the same type of support you can get in person. I think that true support comes from sitting face and to face and knowing that: wow, this person is sharing my pain, or my joy. This person understands where I’m coming from. You see that and you feel that energy from another human being that you can’t get from a keyboard.

For more info on the Center’s support and social networking groups—visit lalgbtcenter.org or call: 323-993-7400.