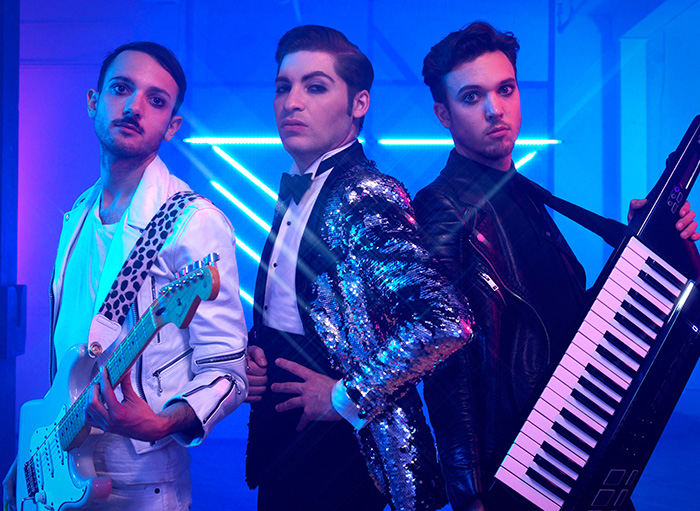 For those of you headed to Palm Springs Pride this year, you are in for a real treat, served up live on stage by the up and coming LA electro-soul trio, Iconique. The band consists of gay singer Leo Paparella, and multi-instrumentalist brothers Gary and Eric Promani, who are openly straight. I say that with a bit of a wink and a nod, because nowadays, poly-sexuality just ain’t that big of a deal anymore, especially when it comes to musicians and performers. And Iconique are living proof of this.

When you listen to their music, you’re instantly whisked back to the late 70s and mid-80s, as the band distills the classic sounds of dance floor disco, suave soul, and shimmering synthpop into their own unique and opulent vision. For reference, imagine if Prince, Chic, David Bowie and Giorgio Moroder all got together to jam and get the kids dancing.

I got to chat with Leo about the band’s influences, being an out performer, and which music and style icons and legends rule this trio’s roost.

What was the first album you bought with your own money?

I was about 10 years old, and it was “The Best of Blondie” from 1980. I adored “Atomic” most of all, and still do. Debbie Harry was also one of the earliest beauty icons I ever worshipped. Her facial features are very 80s, nail-salon-art approved.

“Gay people are consistently some of the greatest cultural innovators and artists throughout history…I consider being an out, gay man to be essential to the cultivation of my art.”

What bands or musicians were you and the guys obsessed with as kids?

We may have individually discovered them at different times, but our set of influences are pretty much the same, with Prince basically being the common thread to our musical tastes. Come to think of it, the biggest rift in our band is mostly which era of Prince we prefer best!

You have a serious falsetto going on. Who are the top singers that inspired you to get on the mic?

I’m really struggling to answer this without giving you pages of unnecessary idol worship! My foremost favorite vocalist is Mariah Carey. She has a mix of range, agility and resonance that borders on miraculous to me. I also adore Whitney and Streisand. In terms of males, Freddie Mercury “sells” the voice, as Montserrat Caballé once said, and I find him incredibly effective as a vocalist. George Michael was also a formative influence.

Do you find it easier being an openly gay performer in 2017, then say how that might have been even 10-20 years ago?

Society has overall moved in a more progressive direction (though the current grotesque political climate in some ways challenges that), and I feel the music industry has moved to a more muted, blasé place in terms of LGBTQ representation.

Why do you think it’s important to be out as a performer?

I have an enormous amount of pride in our community. Gay people are consistently some of the greatest cultural innovators and artists throughout history, and I consider being an out, gay man to be so essential to the cultivation of my art. Thus, I can’t imagine being evasive about my identity. And it’s important for me artistically, because it gives me the freedom to fully express myself. But most of all, it’s important ethically, because there is zero shame in who we are. And I want to communicate and exemplify that to the next generation of LGBTQ artists coming up after me.

Do most people just assume that all three of you are gay?

That tends to always be the assumption, but it’s never a problem. My bandmates grew up with a gay brother, and they’re truly the greatest support system I could ever have. They never ask me to tone down my flamboyancy or try to mute my lyrics. They have a deep security with  their own masculinity, which really makes those petty issues non-existent. As a gay man, they actually make me feel very hopeful for the future.

If Iconique could share a dream bill with one performer (living or dead), who would it be?

It would be a massive dose of humble pie for us in terms of sheer musical chops, but Prince would be the ultimate ambition. People overuse the word
genius, but for me he is the benchmark of it in contemporary music. I miss
him dearly.

You just released a fabulous cover of the Cardigans’ “Love Fool.” Are there any other songs you think could use an Iconique makeover?

Thank you, I’m glad you enjoyed it. We’re planning a new cover that we can’t quite reveal yet. But I will say, there’s something interesting to me as a producer to continue our anachronistic theme of taking 90s pop classics and retrograding them with 80s production.

What’s next for the band, and where can people keep tabs on your music and gigs?

After Palm Springs Pride we’ll be at The Roxy in West Hollywood on November 16th in support of Gavin Turek and Doug Locke. We’ll also be releasing the song and video for our eponymous “Iconique” single very soon. People can keep up with us on Soundcloud, Spotify, Instagram, and at iconiqueband.com.