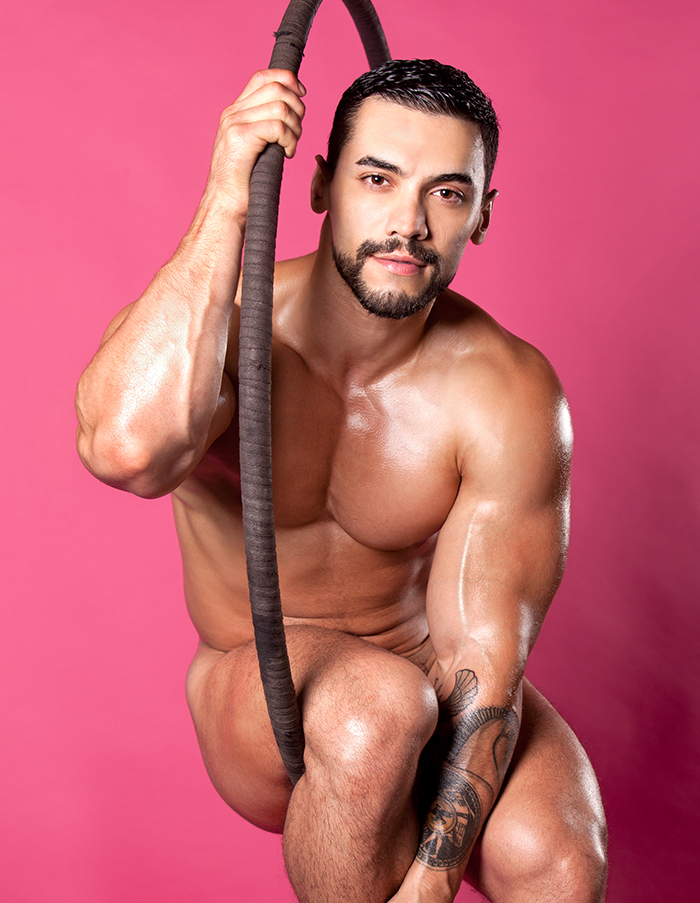 An Iranian gay refugee, adult film actor, model and bodybuilder Arad Winwin, 27, believes in love. “Never lose hope, stay blessed and keep your heart clean,” he advises in an interview with THE FIGHT. “Be kind to yourself and nice to others and also be appreciative of what you have.”

Featured in fashion designer’s Andrew Christian coffee-table photography book, Sex = Power = Freedom, and appearing at this month’s Overboard LBC at the Queen Mary during Long Beach Pride, Winwin went through some dark times before ending up on the other side of the tunnel.

Tell your readers that they should always follow their dreams and not let any obstacles stop them from trying to achieve them. It doesn’t matter how big you are—what   matters is how hard of a hit you can take and get back up and keep going.”

“Living in Iran was not a happy life… people are just trying to trying to survive day-to-day,” he recently revealed in an interview with Gay Star News.

“I think it is important to tell my story because people are unaware of what it is like for most people that have to live in countries like Iran where people are denied every type of freedom, personal choice and chance to advance your life,” said Winwin.

“In Iran I was not allowed to wear my hair the way I wanted or shave my face, or wear a t-shirt, and people aren’t even allowed to date or have sex outside of a heterosexual marriage because everything is control by the government… If I would have been identified as gay by the Iranian police or government I would have been killed.”

In spite of the above, looking back, reveals Winwin, his childhood memories are mostly pleasurable. “I grew up in a big family with two crazy brothers  and spent most of my time doing sports like karate and body building competitions. Overall I had a good childhood. I went to school, had fun with my friends, traveled with my family and enjoyed playing games like Atari,” he tells THE FIGHT.

Things changed, however, changed, when Winwin turned 18 and joined the army (military service is mandatory in Iran). It was during that time when Winwin decided he could never be free if he didn’t make a drastic change.

“I decided to leave because I knew I would not be able to have any type of life that would provide me any happiness there,” he told Gay Star News.

“Now that I think about,” he tells THE FIGHT, “it kind of blows my mind that I did this alone. I walked for two nights and three days escaping through the mountains to cross the border into Turkey.”

Upon arriving in Turkey, Winwin was arrested after  authorities revealed he was holding a forged passport and he was  imprisoned for six months. Turkey began the procedures to deport him back to Iran “where I would have been hanged for being a military deserter.”

Luckily Winwin was accepted into the United Nations refugee program. “I applied with the help of a lawyer while I was in jail in Turkey so that way I wouldn’t be deported back to Iran. My lawyer Arsham Parsi saved my life by helping me do so.”

“I am extremely saddened by Trump’s new policy on immigration,” said Winwin in a recent interview. “I think it is important for Americans to know that people are seeking refugee status in the USA because they love America for the freedom this country provides.”

Eventually Winwin made it to Los Angeles and embarked on a life changing career as a go-go boy, an adult film entertainer and model.

“I came out to my family and friends because of the adult entertainment I’m involved in. Some were glad for me, others were upset, but I’m happy with the path I’m on now.”

When asked if he has any life lessons he would like to share Winwin says “tell your readers that they should always follow their dreams and not let any obstacles stop them from trying to achieve them. It doesn’t matter how big you are—what   matters is how hard of a hit you can take and get back up and keep going.”

Catch Arad Winwin at Overboard LBC on Saturday, May 20 at the Queen Mary during Long Beach Pride. for more info visit www.overboardlbc.com.