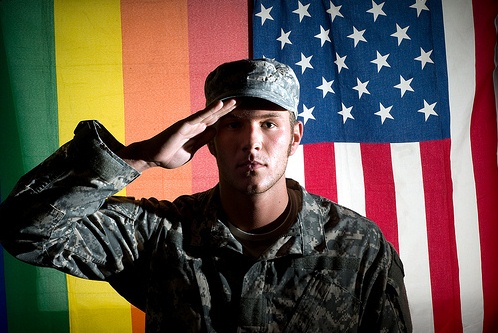 The Trump Administration announced on Friday that it was nominating Mark E. Green to be Army Secretary and LGBTQ advocacy organizations have organized an effort to block him, citing Green’s ‘appalling’ record on LGBTQ rights, according to a report from the Washington Post.

Green—a Tea Party darling—is a retired Army officer and a member of the Tennessee State Senate who was widely expected to run for governor. He has sponsored legislation in Tennessee which opponents call “a thin veneer for discrimination,” allowing businesses to single out their LGBTQ employees. And he has suggested being transgender is a sickness.

In a video obtained by Slate Magazine, Green can be seen complaining that America has “bred general officers who are afraid of their own shadow” and that “we need a warrior ethos back in the United States military.” Green intends to rectify this problem by “being the salt and the light to the people around me,” he says. “We’ve tolerated immorality, and we’re not reflecting light.”

The Slate piece goes on to point out:

To devout Christians, salt and light are biblical metaphors for the duty of believers to halt moral rot by resisting secularism, apostasy, and heresy. To today’s conservative Christians, this means opposing rights for sexual and gender minorities, women’s equality and religious freedom for Muslims. That is, it means spreading a Christian version of the Sharia law that the far right insists Muslims seek to impose on America.

In a joint conference call with journalists Monday officials with the Human Rights Campaign and the American Military Partners Association said that Green’s views are “radical and outdated,” and that they are rallying support against him. HRC’s national press secretary, Stephen Peters, said he found the selection of a man who had “gone out of his way” to target LGBT people in the way Green has to be “appalling” and “unacceptable.”

The nomination of Green comes less than a year after the end of the Pentagon’s ban on transgender military service, and less than five years since President Barack Obama repealed the ban on gays and lesbians serving openly in the military—the poorly named “Don’t Ask, Don’t Tell.”

The choice of Green is particularly galling because he would replace the first openly gay service secretary, former Army Secretary Eric Fanning, who’s appointment to the office by Obama in 2016 was a powerful symbol to LGBTQ activists both within and outside the military that the era of serving in secret was over for good.

You can click here if you would like to support the American Military Partners Association of the HRC in their fight against Mark E. Green.