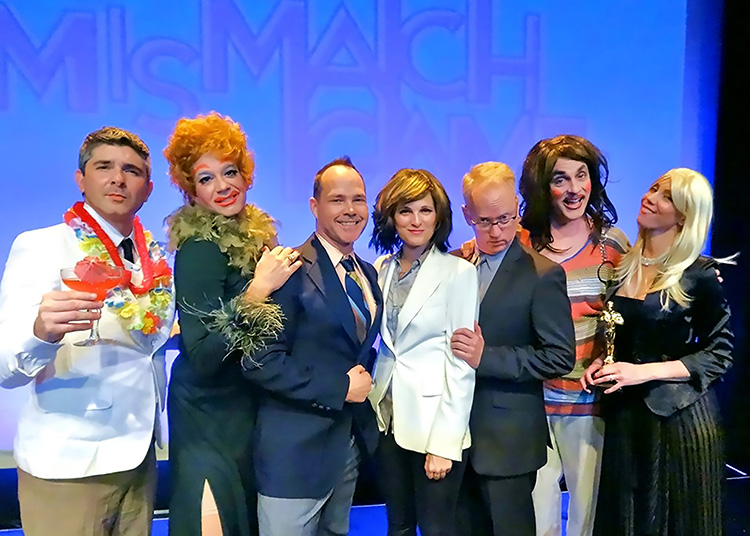 The Mismatch Game Returns To The LGBT Center

A new edition of Dennis Hensley’s The Mismatch Game returns to the LA LGBT Center for two nights on Friday, January 20 and Saturday, January 21 at the Los Angeles LGBT Center’s Renberg Theater. The show is a parody of the popular 70’s show.

Creator, producer, and host Dennis “Gene Rayburn” Hensley will be joined onstage by a panel of fractured celebrity impersonations that have included the likes of Zooey Deschanel, Bea Arthur, Harvey Fierstein, Cher, Ricardo Montalbán, Rosie O’Donnell, Miss Piggy, and Tim Gunn. The cast for the upcoming show is to be announced.

Hensley and company are donating the proceeds to benefit the Center’s services. Since its debut in 2004, The MisMatch Game has raised well over $100,000.

THE OTHER SIDE: A QUEER HISTORY’S LAST CALL

Los Angeles Public Library, 630 W 5th St, Los Angeles, California 90071. 2pm-4pm. Free screening and panel discussion at the Mark Taper Auditorium at the Los Angeles Central Public Library. Following the film is a panel discussion. Speakers include ONE Institute’s Curator David Evans Frantz, famed AKBAR owners Peter Alexander and Scott Craig and Richard Little, one of the men featured in the film that was entrapped by the LAPD in gay bars in the 60s and 70s.

Each class explores a different pattern, with an emphasis on experimentation and exploring how each tie can be used in multiple ways. Beginners always welcome. Cost: $10 at the door.

Oil Can Harry’s, 11502 Ventura Blvd, Studio City, CA 91604. Runs through Saturday, Jan. 28. Info: www.oilcanharrysla.com. A full weekend of Oil Can Harry’s! Start off on Thursday—Ms Meet n Greet—continue on Friday with the FIRST EVER Ms Oil Can Harry’s contest. That night will also be the Mr. Meet n Greet.  The weekend will then wrap up on Saturday with the Mister contest from 6-8 pm. Followed by a Dirty Disco Victory party held at the bar during Disco Night.

Akbar, 4356 W Sunset Blvd (Fountain Avenue), Los Angeles, CA 90029. Info: www.akbarsilverlake.com. Tamale Ringwald’s Birthday. The theme is Valley SQURRRL so please get that side ponytail ready, don your best Flash Dance workout gear or glam it up with fluorescent everything and come out and join them for a radical night of kick-ass music.