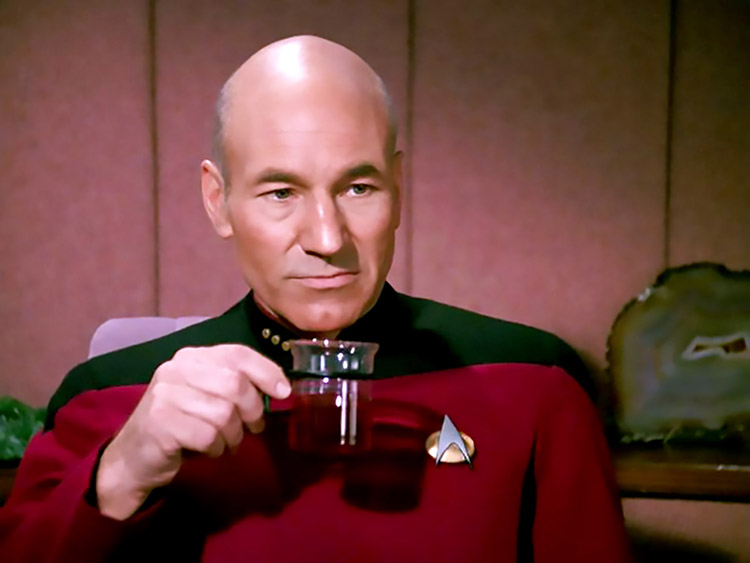 Do you remember that Star Trek movie where Picard winds up in a Christmas fantasy for awhile before he realizes that he has to shake it off and save the universe? I’m going to stay there until Twelfth Night…

Hovering On The Edge Of Consciousness

I believe my last column was written from the Palm Court. I was sipping on some kind of sherry and gin concoction that Jimmy whipped up (I told him “surprise me!”) and I was writing with my new safety fountain pen, a sailing gift from Lady Eldryth Pierce Mabley. It’s hard to think back, but I imagine I was telling you about our plans for New York City and how excited we were to return in time for the big suffrage parade.

Now I continue our communication from the Carpathia infirmary, my ears still ringing with the screams of the dying, my lungs still afire, my body still frozen from the ice water that washed through our small boat. How is this possible? The Titanic was unsinkable. It had a double digit lead until Jim Comey announced it might have forgotten to turn over a few more emails. Oops, never mind!

Will things ever be right again? I’d ask Uncle Phillip, but he perished in the tragedy. I last saw him in the smoking room with Alexander Peabody and the Count. They were pouring what looked like brandies and toasting Titus Oates although by then the ship was listing terribly.

I’m not sleeping very well these frightful days, and before I wake I hover on the edge of consciousness, aware that the world has changed and wanting to drift away again. But by then it’s always too late. I wake, for sure this time, into a new America where Donald Trump is President of the United States and where the seats of power are gradually being filled by a B-movie cast of characters with no real experience and little care for others; ideologues who lack the subtlety of mind to grapple with nuance, and who instead operate in black and white like children.

Did I mention I lost my right foot to frostbite?

The Coarsening Of Debate

I’m dropping this fun Titanic metaphor with no small amount of effort. I’d rather be fanciful than face reality, and part of my problem is that each time I consider the impact of the election I have a different reaction. Just after the election I wrote an entire essay for THE FIGHT looking on the bright side, much of which has already shown to be false.

Infrastructure spending sounded great, until we learned that the policy makers are not planning to allocate funds to fix old roads and bridges, but are instead planning to give tax credits to the investors backing new for-profit construction projects.

Surely, Trump was not going to wipe out Obamacare without a workable replacement, I speculated. Well actually yes, he is planning exactly that.

I basically thought Trump would gravitate towards veteran business people and bureaucrats and instead he has collected a bunch of loony tunes to serve him and he has given his ear to Steve Bannon. I thought Trump might be presidential, or give a thought to his legacy. But no, the man just tweeted that the penalty for burning a flag should be loss of citizenship or prison. What? (I can’t do it justice in print, but just scream that at the top of your lungs.)

Given all of this and more, what makes us think that this administration will abide by any restraints whatsoever? How do we advocate for ourselves and for the rule of law in general when the political system itself seems to be losing coherence? What are we to make of the coarsening of debate, the loss of respect, the feeling that our American checks and balances are about to give way to a display of raw power from a bunch of bruisers who have no idea how or why the rules for governing this country were made.

Where do we go from here? We don’t “go” anywhere. We survive. Oh, and I’m thinking of raising my monthly contribution to the watchdogs at the Southern Poverty Law Center from $14 to $20.

Yes, life goes on, and even as I write on November 30, Lambda Legal lawyers are arguing a major case before the 11 active judges of the U.S. Court of Appeals for the Seventh Circuit. Sometime next year, maybe in three months, maybe in six, maybe in ten, this court will likely rule that gays and lesbians are already protected against workplace discrimination under federal law.

By banning sex discrimination, the theory goes, Title VII of the Civil Rights Act of 1964 inherently bans discrimination based on sexual orientation and gender identity as well. It may not be written out in the statute, but gay and trans bias are nonetheless subsets of gender bias. The theory isn’t new, and indeed, the High Court ruled in 1989 that sexual stereotyping is illegal under Title VII’s ban on sex discrimination. So it’s high time that a federal appellate court, one rung down from the Supremes, puts this in writing. Will such a ruling then head to the High Court? It could, and remember, even though Trump will appoint the justice who replaces Scalia, we will still maintain a 5-4 pro-gay balance as long as our own champions keep breathing.

Last month I was certain that we were roughly 18 months away from a powerful ruling in favor of LGBT civil rights. Now it may still be possible, but it’s surely not a done deal.

I find it hard to face regular old LGBT news. I’m depressed. I managed the above account of the Title VII arguments in the seventh circuit. What more do you want? An update on the fourth circuit trans case? Forget it. A piece on Lambda’s intersex client who is trying to get a non-gendered passport? Sorry. The dirt on the lesbian friendly Zales commercial that pissed off One Million Moms? Another time.

Cake news? A state court ruling in favor of transition surgery out of Minnesota? A Medal of Freedom for Ellen Degeneres? The recount-pending victory of Democrat Roy Cooper who seems to have beaten anti-GLBT Pat McCrory for Governor of North Carolina? Oh, here’s something! My cousin Penny believes there’s a chance the beleaguered president of South Korea might be hiding a lesbian tryst with her close friend who is accused of corruption. We don’t exactly have evidence to back this up, but we believe it, Penny and I. By the end of breakfast the other day, we were convinced, and in this new world of fake news why should we be hamstrung by a need for proof. That’s so November 7, 2016.

Mel and I have stopped watching cable TV. We’ve stopped watching the Sunday shows. We have kept our expensive newspaper subscriptions only because someone has to pay for reporters and editors, so it’s like a charitable donation. I glance at their front pages every morning the same way I would peek into a tarantula display at the science museum, with fear and loathing and a strange compulsion to see.

I suppose my plan is to run the “holidays” from now through mid-January, festive drinks and earmuffs protecting me from the outside world. Do you remember that Star Trek movie where Picard winds up in a Christmas fantasy for awhile before he realizes that he has to shake it off and save the universe? I’m going to stay there until Twelfth Night. I’m going to take some crazy drugs on January 20 (what are the kids doing these days? send me some!). And then I’m going to gradually rejoin the world, if it’s still there.