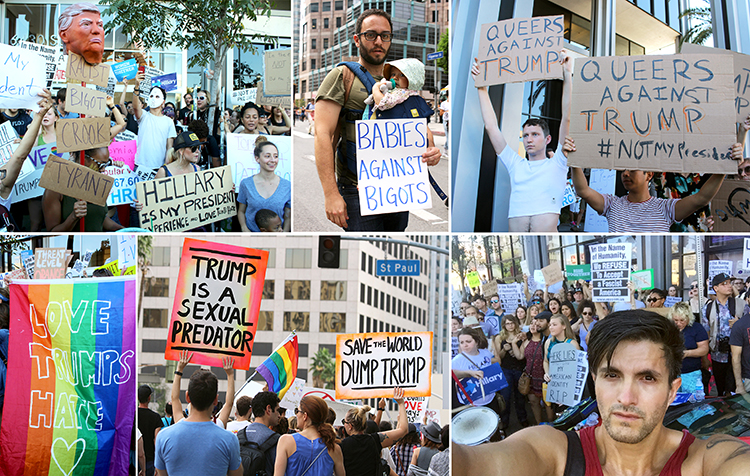 We can’t let Trump be our new normal. We need to call him out. We need to put him on blast while he fills every cabinet seat with members who oppose LGBT rights.

I was there. I joined the massive gathering of thousands of anti-Donald Trump demonstrators at the peaceful, yet angry Unity Against Hate rally on Saturday, November 12, which started at McArthur Park and ended at the Federal Building in Downtown Los Angeles.

I also attended the smaller Trump protest that happened the following day at the footsteps of the CNN Building in Hollywood, because let’s face it, media outlets like CNN created Trump. They brought that Conway woman into our living rooms and they gave Trump the free press he needed to rise to power.

The Saturday rally was the 5th protest in Los Angeles at the time and is currently the largest anti-Trump protest in the country with the number of protesters ranging from 8,000 to 14,000, depending on which news outlet still has your ear. The crowd felt much larger from the ground. It was loud and people were diverse in age, race, religion, sexual identity and personality. Parents brought their children. One guy carried his toddler son on his chest with a sign that read “Babies Against Bigots” to express his fear for his child’s future.

We hit the pavement and blocked major intersections with fists punching at the sky, rainbow flags waving, and angry signage protruding over a long river of heads protesting the presidential election of a reality TV personality with a deranged, if not dangerous disposition that has inspired close to 1,000 hate incidents against minorities across the nation since he was elected.

The chants varied, but people resorted back to repeating “Not My President!” And “No Trump! No Hate! No KKK in the USA!”

The protest outside the CNN building the following day was not as large, but the message was clear. “Shame on the Media! Shame on CNN!”

I went to both anti-Trump rallies by myself. My friends were either too spiritually beaten to pound a rebel drum, or they were too busy tweeting about their outrage and not too much action. I was told the whole thing was a waste of time. They said the protest was too little, too late. Some Facebook friends (the white ones) suggested that we give Trump a chance. And of course I heard that we were being sore losers, that we were acting like whiny bitches, that we were inspiring our own hatred with these protests and that we needed to “go high” and accept the outcome.

I say we give Donald J. Trump the same chance, respect, peace, support and legitimacy that he and his goons gave Obama after he was first elected president. We must remember that Trump may very well be our reality for the moment, but we can’t let him be our new normal. We need to call him out. We need to put him on blast while he fills every cabinet seat with members who oppose LGBT rights. We need to continue protesting the hatred, bigotry, misogyny, xenophobia and homophobia that he inspires in the hearts of the neo-Nazi alternative right and all those who voted similarly to the Ku Klux Klan.

I know these anti-Trump rallies won’t change the outcome of the election, but there was something cathartic about being part of these protests. It gave many of us some badly needed relief after a devastating loss. And it felt great to remind the Trump/Pence ticket that the majority of Americans did not vote for them.

A massive anti-Trump protest is forming in Washington DC in time for Trump’s inauguration day. Similar demonstrations are coming to a major city near you. Will you be there?