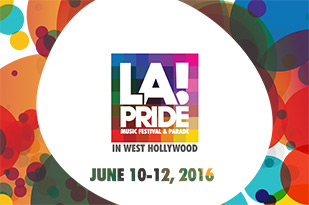 The 2016 LA PRIDE Festival & Parade is at the center of community and pop culture, bringing some of the hottest musical acts to West Hollywood to celebrate equality and the diversity of the LGBTQ community. The inclusive 3-day LA PRIDE Festival weekend is set to once again offer something for everyone from music to art, culture and signature events. Featuring three different music stages, the Delta Air Lines Main Stage, the Nissan Latin Music Stage powered by Club Papi and the Hip Hop Music Stage powered by B.A.S.H. LA PRIDE’s weekend of entertainment sets the stage to ring in one of the Festival’s most exciting lineups but that’s just the tip of the iceberg.  This year’s festival features a collection of tailored programming from Dyke Marches to Vogue Balls, Youth Dances, Trans* Socials, immersive art exhibits and more.

The Annual Dyke Rally & March will start on the Main Stage at 6pm with appearances by West Hollywood City Council and Jewel Thais-Williams (LA PRIDE’s 2016 Grand Marshal) and power its way onto Santa Monica Blvd after the program at 7:30pm.

The Trans* Social, a celebration of Trans* specific programming will return to the Nissan Latin Music Stage, between 6pm and 10pm.   The Trans* Social will feature an exciting mix of live entertainment celebrating the community.

Friday night will also feature two new community events starting with the brand new Youth Dance in partnership with LifeWorks. As a drug and alcohol free event, the Youth Dance will give a place for LGBTQ youth (under 24 years of age) to celebrate Pride. The event will take place from 6pm to 8pm.  Also new this year is LA PRIDE’s first-ever Vogue Ball brought to you by Reach LA. Beginning Friday night at 8pm inside the West Hollywood Park auditorium, the Vogue Ball will be the most legendary battle featuring the dance, modeling and fashion artistry of different Houses.

On Saturday, the Auditorium transforms into a Drag Revue featuring some of LA’s top Queens with performances, entertainment and runway fierceness.  On Sunday, the Auditorium changes gears to host the return of Country Western, an evening of country music and line dancing.

The art of our community will also be celebrated with several large queer art installations that can be found integrated throughout the Festival grounds. Curator for this year’s art experience, Nathaly Charria, explains the concept of “Cruising”, which is the center of this years Art at the Park, as “a nostalgic reminder of yesterday’s survival tactics and a call to take our politics (and our bodies) back to the streets.” The art of this year’s exhibit will showcase both prominent and emerging artist within the LGBTQ community

Added to the programming for kids, and the adults who act like kids, LA PRIDE is bringing a new Youth Arcade presented by Toyota to this year’s Festival.

This year’s non-profit exhibitor engagement will feature over 40 non-profit organizations within the Community Park section of the Festival.  This area is meant to engage, inform, and educate the public on the missions and projects of both local and national non-profit community organizations.

The VIP experience at the LA PRIDE Festival is also being revamped to include enhanced food and beverage options, a new VIP viewing deck with an exclusive view of the Delta Air Lines Mainstage, and separate entry area, which will significantly shorten wait times to enter the festival.  LA PRIDE is giving away a VIP PRIDE Weekend Getaway featuring: 2 VIP Tickets, 2 Nights at The Mondrian in West Hollywood and $1000 shopping spree at The Beverly Center. Visit the LA PRIDE Facebook Page HERE for details.

Throughout the festival there will be featured activations that are meant to educate attendees on the issue HIV/AIDS within minorities communities. They will also teach the public about protection against and prevention of HIV/AIDS with the LGBTQ community.

Presented by Christopher Street West, West Hollywood will be home once again to the annual LA PRIDE Music Festival and Parade, the largest LGBTQ ticketed event in the United States. For 46 years, Christopher Street West (CSW), a 501(c)3 non-profit organization, has produced the LA PRIDE Music Festival & Parade; A series of events celebrating the accomplishments of the LGBTQ community and shedding light on its continued struggle for equality taking place in the City of West Hollywood, CA. As the largest ticketed music festival in the Los Angeles area, each year the 3-day Music Festival brings with it a lineup of the hottest music acts of today. Famous for its free-to-the-public parade on Sunday morning, the festival is an all-inclusive celebration of the LGBTQ community and their supporters.