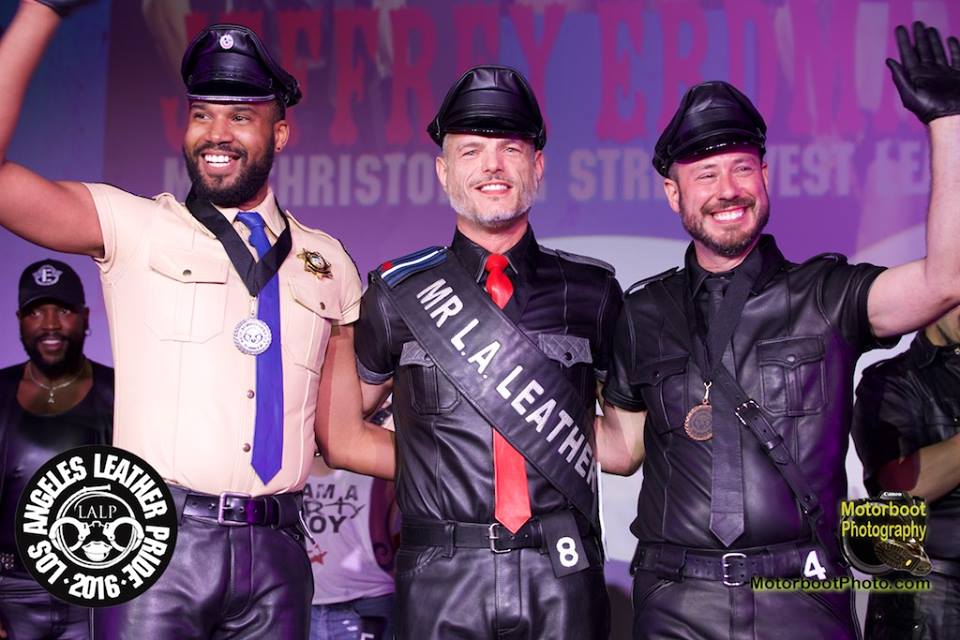 Jeffrey Erdman made history at Los Angeles Leather Pride this year for being the very first Mr. Christopher St. West Leather man to win the Mr. LA Leather 2016 title and a chance to compete at this year’s International Mr. Leather competition in Chicago.

Moments after his name was announced as the winner, THE FIGHT snagged him for an exclusive interview to discuss what winning the title means to him, how he plans to use that title as a platform to bring awareness to an older LGBT generation and what he hopes to get out of IML.

Congratulations on your win. You’re the first Mr CSW Leather man to win the Mr. LA Leather title, how does that feel?
I can’t breathe. I tend to hold my breath a lot. Oh my goodness. I feel amazing. This is really a rush. It’s really exciting. I had no idea when I started this journey that this was going to happen.

What emotions did you feel when they called your name?
I don’t even know. It was like, oh crap [laughs]. This is big.

Did you think you had a chance at winning?
Going into it, I thought there was no chance. I was the first contestant and I saw all the contestants come after me and I thought he’s amazing, he’s going to win. I didn’t think this would happen until we started prepping for the contest and it was coming together and I thought, this could actually happen. People were asking me, do you really want to win? I had to ask myself the same question and thought, fuck yeah, I really do want to win.

What does wining this title mean to you?
It means a lot of things. It means respect from my community, which is really important to me. I really cherish earning people’s respect and that I’m worthy of that respect. What I hope to really do is turn that respect into great things for our community. I want to be able to use this as a platform to use my voice and speak out for positive changes—especially in my generation, because I’m representing an older generation and that’s an important thing I want to bring to the title, at least I hope so.

What are some of the things that you feel passionate about?
When I did the work around meth addiction in my generation, it was a very particular part of our community. It was also very significant to me that more than half the people living with HIV today are over 50. There is a huge population of long-term survivors. That’s very important for me, but then I started looking at the bigger picture around housing and concerns about isolation. Elder gay seniors are very likely to be isolated and fall into depression and fall into more serious complications, so we have to get them out of isolation, get them out of their homes and around people who love them and care for them. That’s what I’d like to do, is provide more service and more opportunity for seniors to come together with other people.

What do you think is going to happen to our older LGBT generation?
I often refer to our old generation as the lost generation. People don’t think about that. There is a lot of focus on youth and I understand that, but a lot of people aren’t conscious to the fact that the number of gay people over 65 is going to double in the next 15 years, and that’s a huge amount of people that we have to figure out how to take care of, because they don’t have families to support them. I take care of my mother. She lives in my house. Who’s going to take care of people who don’t have children to do that.

Are there other issues you’d like to address down the line?
Yes, there are obviously many things that need to be done or can be done. I have a 20 year-old son that was homeless at the age of 13. He was HIV positive and was living in shelters and I was with him and mentored him into getting into college and he’s finishing his second year, and that’s really been my personal journey and I hope I continue to do that kind of work with gay youth and show them the importance of education.

You have Patrick Smith, Mr LA Leather 2015 and Eric Paul Leue, Mr. LA Leather 2014. Is there anything that you take from their experience?
It’s been a little scary because I look at those guys and I think, I wouldn’t I be able to fill those shoes. They’re extraordinary individuals and if I can hold a candle to any of that, I think I’d be doing a lot. I just want them to be proud of that legacy and that’s what I’m hoping to do. Patrick was all over the world, so I didn’t really get to see him, but Eric was everywhere, and I thought, am I really going to be able to do all this? I’m going to have to find a balance and learn what to say no to and when to say yes. 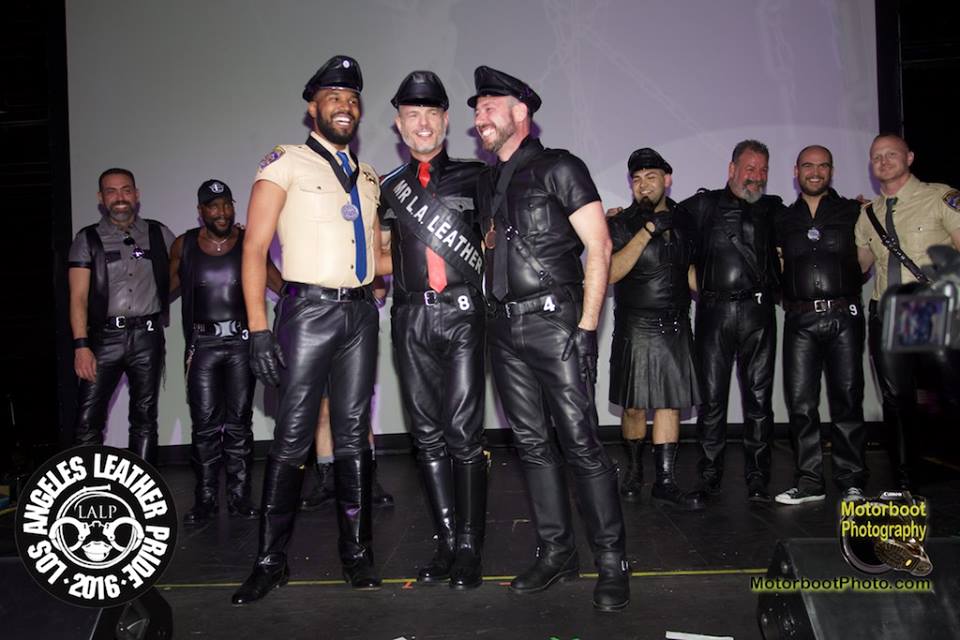 What was it like backstage at the competition?
There was so much love. My title brothers are amazing people. We all have been through this journey together with the stress and the drama and difficulties and the exploration and the self-discovery. There is just so much love back there and support.

Did you think you would make it this far in your life?
I didn’t think I would make into my 50s, especially after testing positive so long ago. All the people I knew died from HIV. I tested positive in 95, the same year I passed the bar exam. The same year I became an attorney. So many people passed away and the treatment was not that great. Fortunately the cocktails came along and here I am. Being able to walk on a stage and feel good and look good, it’s a feeling I thought I’d never have. It’s extraordinary.

Tell us about Team Jeffrey; who helped you put you together for this competition?
There are so many people that I’m grateful for. Obviously it begins with my partner, my boy Xavier. He is Mr. So Cal Leather 2014, so he’s been through this before. Obviously he’s a really important part of my journey and he has all of my love and respect. Our other boy Alex, he’d stitch things and hem things and he’s been great at putting the look together. Then there are my friends and so many leaders in the community. There is my Christopher Street family like Nicholas Oliver and Tom Wang have been there for me. There is Steve Ganzell, Tom Pardoe, Don Mike and the people that helped me prep. They told me things and not all of it were things I wanted to hear and I took it all to heart and the proof is in the pudding.

So what happens after tonight?
I really don’t know. I don’t know what to expect. I’ve never seen it from this side. Xavier and I are going to Peru for a couple of weeks next week. I’m sure people are not excited that I’m leaving town after this. We have an opportunity to spend some time together and have spiritual journey at Muchi Puchi Peru.

Have you ever been to IML before?
I’ve been two years now. As a spectator obviously.

What do you think the IML competition has in store for you?
So far I’ve had a lot of fun, and I’m being told that I no longer get to have that fun. I didn’t really think about IML. I couldn’t put my head in that space. I didn’t know if I’d win and it was too much to think about. It’s too much added pressure. And now I get to turn my attention to that. I feel that even though it’s bigger and more elaborate, it’s going to be more fun in a way, because I have a this [title] going in. Maybe I’ll feel differently by the time I get to IML. Before I thought, oh I’m never going to win IML, so it’s going to be easy. I’m just going to strut around on stage and have a good time. I don’t know. I really want to enjoy it and have fun. I hear it’s an extraordinary experience and that’s what I’m looking forward to.