Thank You For The Music [cover feature] | The Fight Magazine 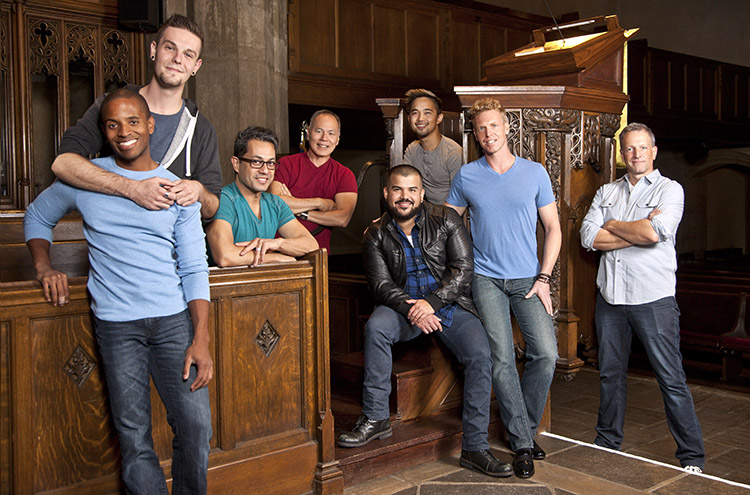 Hailed as “one of the last important links to a glorious tradition in music,” the Gay Men’s Chorus of Los Angeles (GMCLA) has been a notable part of Southern California for over thirty-five years.

On a July night in 1979, a small group of men opened the doors to a room at the Plummer Park Community Center in Los Angeles (now West Hollywood) and waited and wondered if anybody would show up. They had posted flyers around the neighborhood announcing the formation of a new gay chorus and this night was to be its first rehearsal. To their great surprise, 99 men appeared and a chorus was born. Within three months of that rehearsal, founding director Harold Kjellberg led the group through its first major event: the March on Washington, D.C. and the first national lesbian, gay, bisexual and transgender (LGBT) concert at the Washington Memorial.

Hailed by the LA Times as “one of the last important links to a glorious tradition in music,” the Gay Men’s Chorus of Los Angeles (GMCLA) has been a notable part of Southern California for over thirty-five years.

GMCLA has performed for 2 sitting U.S. presidents, The Academy Awards, VH1 Awards, Dance Moms, Parks & Recreation, Access Hollywood & I Am Cait. GMCLA has gone on three international tours to South America, Russia and Eastern Europe and has performed for over 41,000 middle and high school students in Los Angeles.

“When the chorus was founded, and for a long time, having a group of out gay men singing on stage was a political and social statement.  Presenting high-quality entertaining concerts and enhancing men’s choral arts are highly important and key to GMCLA’s success.”

“While over time, the audacity of being openly gay in Los Angeles has diminished, but the impact is still felt.  The chorus receives messages regularly that a parent is bringing their newly-out child to one of our concerts because they want to support their child and show them there are lots of other openly gay people.”

Through the height of the AIDS crisis, the Chorus lost over 150 members. Only 12 original members remain. As a result, GMCLA has a deep history of service within the LGBT community, singing at countless memorials, making and commissioning music that helps the community to mourn, to celebrate, to dream, and to prepare for victory.

“There are two programs that are very important to the chorus,” says Bolling – “our youth outreach programs: the Alive Music Project and the it gets better Tour.”

“The Alive Music Project began in 2007 and to date has reached over 43,000 students in Los Angeles area middle and high schools. As arts programs in schools are being cut, GMCLA goes in to schools and provides arts education/appreciation.  If the school has a choral student group, our Artist Director will work with the students, improving their skills and teaching the students a song to sing with the members of GMCLA as part of the school performance.”

Members of GMCLA will meet with the gay-straight alliance, discussing bullying and the importance of being an advocate.

GMCLA also performs for the school.  “This isn’t just a performance though.  GMCLA shares their personal stories with the students and answers questions from the students, opening a dialogue with the students to be able to change stereotypes and  teach acceptance and equality.  The relationship doesn’t end after the performance at the school.  GMCLA invites the students to our guests at upcoming concerts, even providing free transportation to the concert.   Usually, we host a Q&A with the students following the concert as well.  Being able to work with students, using music to be able to have a relationship with them, we know that we are helping transform the future generation to be more inclusive and open to the gifts everyone has to offer.”

It Gets Better Tour

The it gets better Tour began in 2012 and have traveled across the country to 20 cities and held over 80 workshops in middle/high schools and colleges.

“The 8 member cast of the it gets better Tour goes to each town or city for a week.  During the week, the cast does as many workshops, presentations, community discussions as possible. We go in to schools to talk with students, Gay-Straight Alliances, teachers, and administrators to raise awareness of the bullying and building supportive environments for LGBT youth.  We talk with community leaders and elected officials to help them understand the problems facing today’s youth and helping them develop strategies to support their young people.  Also during the week, we work with a community chorus (many times made up of several different choruses) and they perform a song with the cast.  The week ends with a musical theatre performance for the entire community – and the community chorus sings as part of the performance.”

“It is a powerful week,” says Bolling.  “The cast is able to interact with so many youth people in towns where there may not be many role models. The Tour is having a major impact across the country.”

Today  the Gay Men’s Chorus of Los Angeles is comprised of an impressive assemblage of 250+ men – using their diverse backgrounds of triumph and tragedy – combining their stories with the common thread of music to create an unbreakable fraternal bond that brings inspiration to the world.

While public understanding of gay life has evolved much since 1979, there is still fierce resistance to lasting change by opponents to LGBT equality. And the road to today has not always been easy. Through the height of the AIDS crisis, the Chorus lost over 150 members. Only 12 original members remain. As a result, GMCLA has a deep history of service within the LGBT community, singing at countless memorials, making and commissioning music that helps the community to mourn, to celebrate, to dream, and to prepare for victory.

For more about the Gay Men’s Chorus of Los Angeles visit www.gmcla.org.