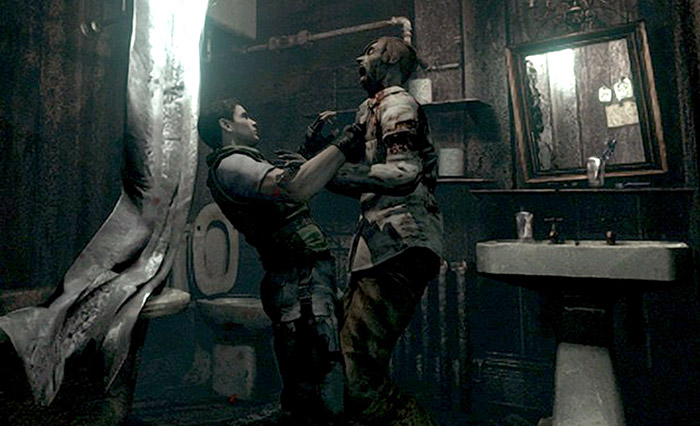 The remake scared its player’s pants off and has been hailed as one of the scariest games ever made.

The moon is full… the house is dark… you are slowly walking down the corridor, listening to the howling wind, and shutters slamming against the windows. You hear footsteps… you stop… then more footsteps… the lights start flickering as you slowly start to come around the corner. The steps get louder. You hold your breath and try not to make a noise… what could it be, you ask.

Then you hear the moans of a what used to be a man… you walk around the corner and then, mortified, you see peeling flesh, blood shot eyes, long legs and arms moving toward you reaching for a bite of your delicate, fresh, hydrated skin…

The game I am speaking of is no other than Resident Evil—the remake. On March 22, 2002 this game graced the Nintendo GameCube with its updated graphics, horrors, and nervous gameplay.

The remake scared its player’s pants off and has been hailed as one of the scariest games ever made. Oh yeah… so why now? Because it is Halloween, bitch! The best thing to do is turn off the lights, get a bowl of popcorn, candy, some coke or coconut water for all you healthy trick to treaters out there… some buds or your lover and watch the fun begin. Hey, it could be a good first date… show off your mad game skills.

The story follows Chris Redfield and Jill Valentine as they get stranded in the woods near a small town called Raccoon City and stumble across a mansion while being chased by vicious creatures of the night….As they enter, they come across some of the most grueling, scientific experiments they have never seen created by the organization Umbrella.

And as trick or treat, here is a list of releases for your video game libraries. Be sure to stumble over to World 8 with survival bag and herbs to get your preorder on and see what tickles your fancy… Looks like a good month if you ask me…