Band Of Sisters | The Fight Magazine 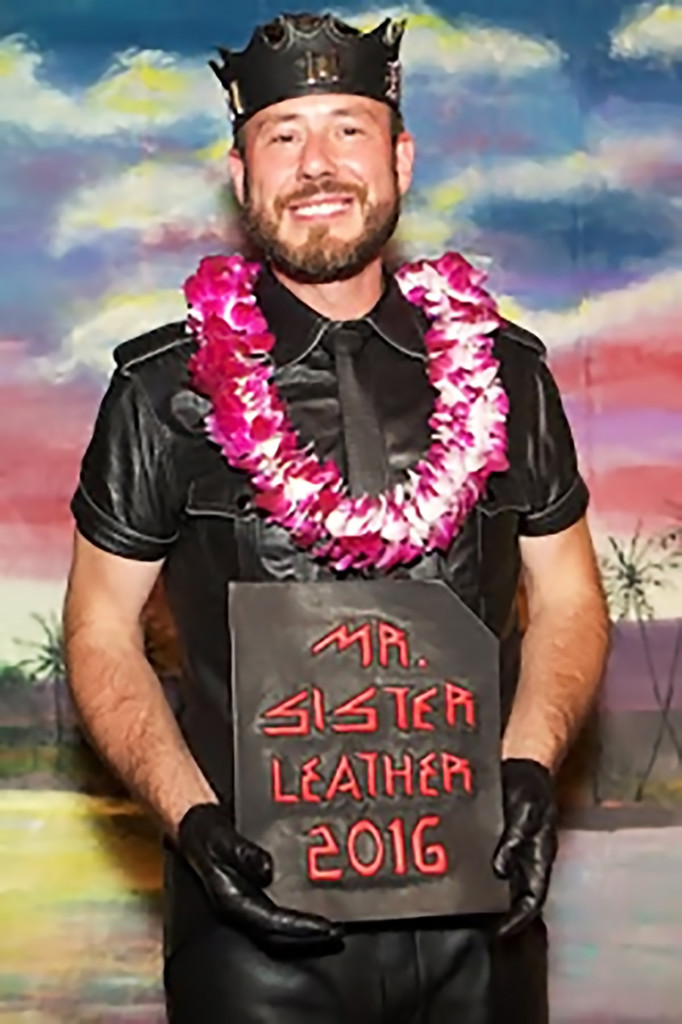 Joe Gregory won the title of Mr. Sister Leather last month. Hosted by The Sisters of Perpetual Indulgence, Gregory is the group’s second title brother. He will compete in the Mr. LA Leather contest in March 2016.

Originally from a small town in rural Ohio named Champion, growing up gay was a challenge reveals Gregory in an interview with THE FIGHT.

“Everyone knew everyone else (and their business).  If you didn’t know what was going on in someone else’s life, it was generally because they were new to the area and hadn’t yet developed a reputation.  Being gay (or anything ‘different’ for that matter) made life a bit more difficult unless you were prepared to face the onslaught of hate from close-minded people who lived there.  Anything other than white, heterosexual, Christian, ‘family’ values was seen as a threat,” says Gregory.

“I attended Miami University in Oxford, Ohio, studying Spanish and Linguistics (I earned my Bachelor of Arts degree).  Miami University is a beautiful public college, however, Miami was even more conservative than life in Champion, Ohio, so I still struggled with dating and coming out while I was an undergraduate there.  It wasn’t until Miami offered a full tuition waiver to come back into its MBA program that I decided it was time to come out of the closet and accept (and be proud of) my sexuality.  No longer would I rely on chat rooms and ‘meet ups’ with guys that I hadn’t even seen in person, as I had done while in undergrad.  Now, I embraced who I was and would live my ‘true’ life.”

Gregory moved to LA in 2013, where he is currently a project manager for a large pharmaceutical company.

Regarding his involvement in the leather community Gregory says that he was “encouraged by my best friend, and fellow leather man, Xavier Espejo.  Ever since he and I started attending Folsom Street Fair together for the past few years, I knew I was a leather man at heart.  But, it wasn’t until I came to LA’s thriving leather scene that I truly felt I found my place… my adopted family… my home.”

“I had contemplated becoming a Sister (“pursuing the habit”) for several years,” reveals Gregory.  “When I arrived in LA and saw the community outreach the sisters do, I wanted to become involved with them… Throughout high school and college, I’ve been involved in community service organizations, and wanted to continue in that vein.  Helping others is at the core of my being.”

“After getting to know the leather community in Los Angeles, and the people in it, I decided that it was time to compete in a leather contest myself.  I had thought about competing within weeks of the Mr. LA Leather competition that ended in March 2015. I wanted to do so for the experience, and to bond closer to the people around me… not for the purpose of winning and to say that I have a title.”

“Ultimately,” states Gregory, “I decided that the Mr. Sister Leather most represented who I was as a person in this community.”

“The Mr. Sister Leather competition is unlike any of the other ones in LA,” states Gregory. “It allowed me to showcase some creativity, to be silly, and to connect with the audience without being too serious… which really is a reflection of how I am as a person.”

“As the new Mr. Sister Leather 2016, my platform is to bring more awareness to mental health/depression issues within the LGBT community, as well as to support suicide prevention,” says Gregory.  “I want people who feel ‘on the fringe’ of society to know that they have a place, are loved, and that we – as a community – look forward to welcoming them home.”

To learn more about The LA Sisters  visit: www.lasisters.org.