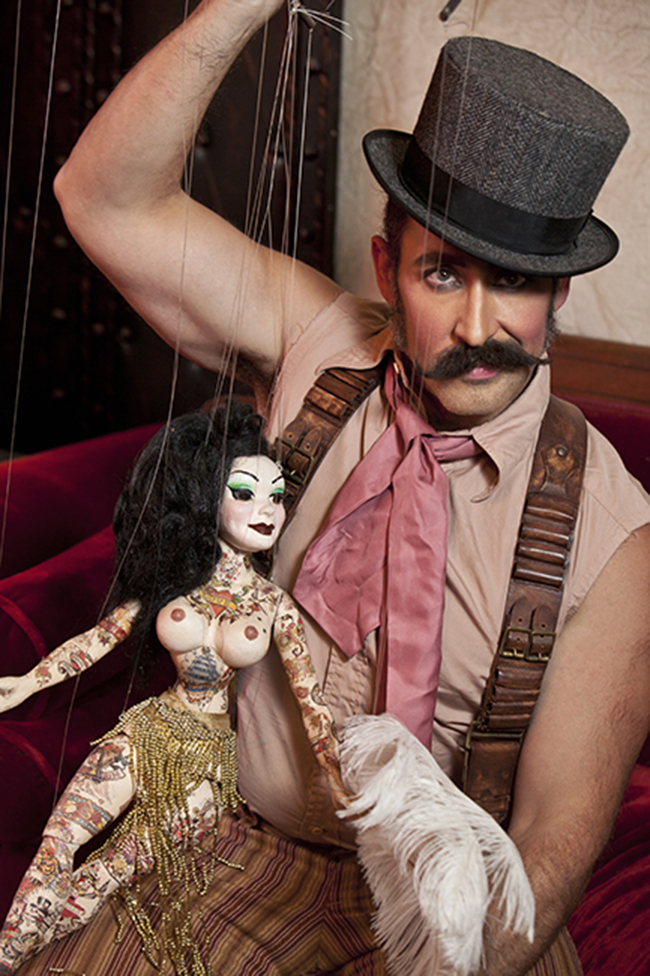 “As a child I was always a loner and a wanderer. I sought out private spaces to be alone with my imagination, which always had more appeal then the middle child role I was never comfortable with in my family. I played alone, and I created alone. My greatest joy came from Saturday morning children’s programming, which at the time was ruled by Sid and Marty Kroft. The Kroft productions were pure magic, HR Puffenstuff, the Bugaloos, Sigmund and the Sea Monsters, these were my greatest influences. They were worlds where humans co-existed with puppets, where magic, imagination and wonder were all anyone needed to conquer any situation, and anything was possible.”

“When I was about 10, my mother pulled me out of school early and we went to the Pantages to see Camelot with Richard Burton, and it was a life changer. The set design was magical, here was an entire world of Arthurian fantasy, live, actual, manifest, that players interacted within. When Guinevere was set on fire at the stake, I was on the edge of my seat thinking I was actually going to witness a real person burned alive!! Well anyone familiar enough knows that she is rescued (damn it!), but I never forgot the rush that came from that, my first theatrical experience.”

“In my late 20s I accidentally stumbled upon the Bob Baker Marionette Theater. I had vague recollections of going to the theater on field trips as a boy, but none of my locally grown peers remembered it at all. I had all but relinquished my memories of it to childhood fantasy, until one day, walking through Echo Park, I saw its dilapidated glory before me. I went to the box office and to my surprise they were OPEN! I went inside and got a tour of the backstage. There I saw dozens of marionettes that had entertained and enchanted me two decades prior. I was swept away in the joy of old friends and beautiful craftsmanship. I knew I had to be a part of something that had such strong influence on my young mind. I worked there for almost 18 years, closely watching Bob manipulate, trying to master the same dexterity.”

“I traveled to Europe and weaseled my way into the backstage areas of several puppet theaters to learn every style, manipulation, control structure, and stringing technique I could retain. Trial and error provided the last of my training. Eventually I built my first show. It started with a single character. I wanted a pinhead puppet, as in Zippy the pinhead of comic book fame. The one character turned into an entire cast of sideshow puppets, inspired by Todd Browning’s Freaks. That was almost 12 years ago, and it remains one of my most frequently performed shows, even though I feel it is primitive in its construction. I built it with no experience under my belt, but with a burning desire to make something. I think that artistic passion is why it still charms and captivates audiences.”

“Puppetry is a unique and challenging art form. It is so all-encompassing, that I always find myself challenged, no matter how many times I build a new character. From concept to design, sculpting, carving, painting, costuming, putting in animated faces, building in specialty tricks, the possibilities are endless and always a new set of obstacles to overcome. I spent 8 years playing with parts of a puppet that I only recently finished. It is a puppet of a vampire that, with a tug of a string and a twist of a control, pops apart to become a flock of bats in an instant. I dreamt of this puppet one night and woke up telling myself I HAD to build it. Its based on a centuries old concept called The Grand Turk. Essentially, there’s nothing new under the sun, but trying to work out an idea that came from a subconscious state proved to be one of my biggest achievements.”

“Puppetry is like a three dimensional cartoon. But unlike cartoons, it’s real! The puppets have dimension, they have character, they move, sing, dance, joke, and they actually exist. It may not really be a talking animal, but it is still actually doing what you see on stage. There is a sense of willful suspension of disbelief because the audience WANTS to be entertained, so they will allow themselves to forget the strings, or the person standing there. I believe spectators see what they want to see. The mind interprets what is being staged and processes it with their own experiences. The child sees an actual dancing monkey, the adult sees a representation of a creature but is still baffled at how it is being controlled, even in plain sight. It’s a magical moment.”

“Currently I am in production of a new show that will premiere this June at the Queen Mary for the Ink N Iron festival (www.ink-n-iron.com). It’s a tiki-themed production, so after Long Beach it goes with Ink N Iron to Nashville in August. I will probably be performing it throughout the summer. It takes from a lot of my influences, some more apparent than others; 1920s boardwalk seagulls, singing flowers, dancing totems, it starts off very enchanted and Disneyesque, but by the end it evolves into savage island natives, cannibals and virgin sacrifice. The whole thing is a series of vignettes, individual numbers that play out independently, but is cohesive as an ideal, stylized, nostalgic version of mid-century Polynesian culture.”

“One of the oddest things about my career so far has been the audience themselves. I really thought I would have captured the attention of more gay people. My influences and style is particularly queer. But I find I am actually supported most by the eclectic, straight, art contingent. Most of my appearances are in burlesque and sideshow stages. It makes me a little sad that its my hetero, hipster peers that can call out the influence of someone like Charles Nelson Reilly or Gloria Swanson in a character, while the younger gay audiences scratch their heads and shrug. There is a disconnect that I am always mumbling about, but I keep on. I chose to pick up a forgotten art form, and I keep hoping that it sparks interest in our golden, gilded past.”