For Whom The Bell Tolls | The Fight Magazine 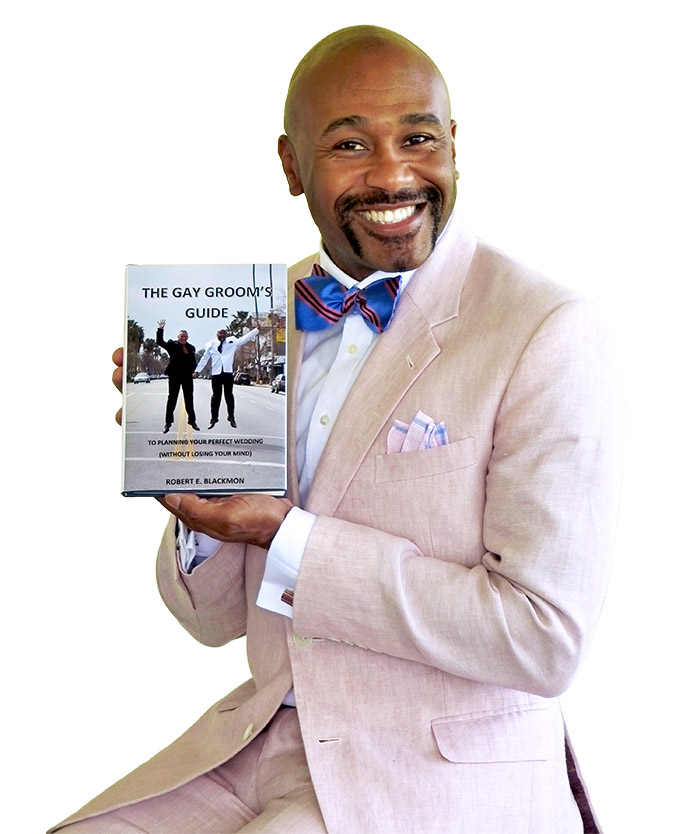 In an interview with THE FIGHT Robert E. Blackmon, a fixture in the Los Angeles gay leather community, reveals the inspiration for his new book on gay weddings, getting married in Canada and the importance of having a Plan B.

What motivated you to write about wedding planning for gay men?

My then boyfriend Martin purposed to me on a trip to the Folsom Street Fair in San Francisco in 2008. Once the shock wore off, I quickly started the planning process. We hadn’t even decided how many guests we were going to have, but I knew that lots of things would need to be ordered in advance. Much to my surprise, I had a very difficult time finding the simplest of wedding items for two men. My frustration led to the realization that if I was having this problem other men must be too. That’s how it all started. I wanted to spare other grooms the drama I faced planning my own wedding.

How did you go about writing the book?

It was exciting. The actual writing of the book evolved from my wedding scrapbook at first. I didn’t begin writing the book until we came back from our honeymoon. So it was an entire year before I began writing. It was more difficult finding the materials to write about. I would go to newsstands and bookstores buying every bridal book available. Not really expecting to find much in the way of items for the groom, I was merely using them for inspiration. This usually pissed me off more than it helped. As I would look for items I would come up against dead end after dead end.

You and your husband Martin got married in Canada. Why?

Because it’s legal there! Martin is a dual Canadian/American citizen and I had already partially moved there to be with him. The original plan was to have a small ceremony with family and close friends in Canada and then a huge party here in Los Angeles with the rest of our friends at our house (here). Thanks to Prop 8, we decided to focus on the Canadian ceremony.

Had you always wanted to get married and have a wedding?

The more Martin and I discussed having a real legal wedding, the more it became important to me. I realized I wanted to wear white (yes I wore white). I wanted the pomp and circumstance that every other straight person takes for granted. I’ve learned and grown. As a proud black, gay father and now husband, I understand that it is important that my children see me be proud of my accomplishments and myself. Having my parents in full support of me was the most amazing part of it as well. But THAT is a completely different book!

How involved was your husband in the writing of this book?

Well the book is entitled, “The Gay Groom’s Guide To Planning Your Perfect Wedding”—I wouldn’t have been able to write it without the other groom (nor should you).

Since I had planned to write it from the inception of the wedding process, he was incredibly insightful about things we needed to mindful of. Martin has an ex-wife. He’s been through the big family wedding process before. He informed me of aspects that needed to be addressed… He was vital to the process for sure.

If you could give one key piece of advice about planning your own wedding—what would it be?

Have a Plan B. It’s wonderful to dream big, but you can’t count on everything to go as smoothly as you’d like. If it does, great! But have a backup for those really important things. The last thing you want on your wedding day is to be so obsessed about what went wrong that you can’t enjoy everything that is going right.

Catch Robert’s radio interview with N’SYNC’s own Lance Bass on “Dirty Pop with Lance Bass” on October 2, 2014 at 3:30pm, followed by his book launch in West Hollywood.