And The BEAT Goes On | The Fight Magazine 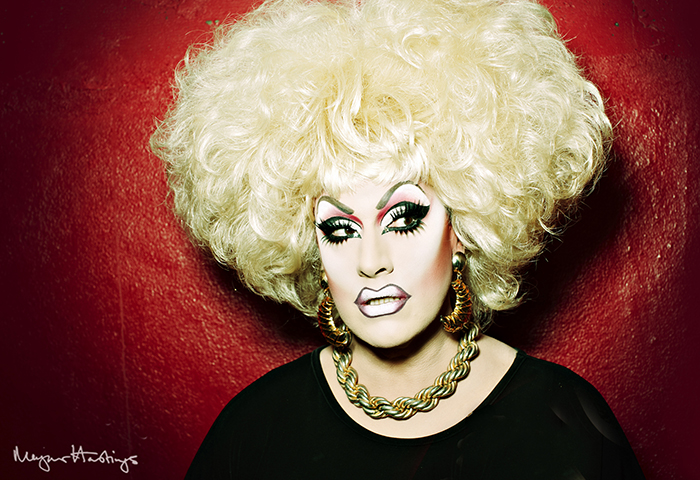 Ms. Beat is celebrating a quarter century of drag genius with this one-night-only, once-in-a-lifetime, one-of-a-kind, best-of show, entitled “And The Beat Goes On.”

Featuring her favorite world-famous sick ‘n’ twisted song parodies, video flashbacks, and lots of special surprises, this golden girl’s silver anniversary is not to be missed!

Jackie Beat, the bitter creation of artist and writer Kent Fuher, was born in Los Angeles way back in 1989-when Melrose Avenue still featured thrift stores and the rock bands on the Sunset Strip could actually play instruments and sing live. Over the past 25 years, Beat has appeared in countless stage productions, movies and TV shows.

Beat is the subject of the full-length documentary and film festival favorite, “My Name Is Jackie Beat.” She also co-founded the electro rock band Dirty Sanchez with famed club promoter and actor Mario Diaz and DJ Barbeau.

In an interview with THE FIGHT Beat talks about poetry, Roseanne Barr, the “T Word” controversy and real girl/drag queen bonding.

How was Kent Fuher’s life before Jackie Beat? What type of job, or career, did you have back then?

I grew up in the suburban hell-hole of Scottsdale, Arizona. I always say it’s a great place to grow up if you’re into Southwestern art, binge-drinking and date rape. And, let’s be honest, who isn’t?

It’s a resort town so I’ve been fired from every hotel you can imagine. After I moved to Los Angeles, I had a series of horrible jobs. I worked at “American Rag Cie” on La Brea and, although the people I worked with were great, the job sucked shit. It sucked shit out of the ass of a dead person. Sorry. I have also done everything from being an administrative assistant for a pre-hire psychological testing firm to doing hateful, low-paying “Murder Mystery” corporate Christmas parties in character drag. I can’t tell you how many times I heard some idiot drunkenly “whisper” to their co-worker, “I think that’s a dude!”

What motivated you to create the Jackie Beat persona back in 1989?

I was a serious—well, as serious as I can be!—poet and artist. Back then, there was quite a poetry scene and I used to go to places like “Cafe Largo” on Monday nights for the open mike. I would get there early, sign up and then sit there for hours watching people like Ally Sheedy and Robert Downey Jr. read their rotten, self-indulgent poems. Looking back, my poems were just as rotten and self-indulgent, but whatever.

Needless to say, they never called my name and I never got to go on stage. One week I got super pissed off and so I dressed in head-to-toe cliché “Beatnik” drag: Black bob wig, black beret, black turtleneck, black shirt, black leggings and black boots. I really wanted to takes the piss out of their whole tired scene, to essentially say, “Not only are you all taking yourselves way too seriously, but this has all been done before—and much better!” Well, they wouldn’t even let me in the door! I went to Rage where they were having an amateur talent night and I read my poem, which was essentially just stand-up comedy. People laughed and I won the contest! I was hooked.

You have written material for Roseanne Barr, Rosie O’Donnell, Joan Rivers, Ross Mathews, Jennifer Coolidge, Kate Flannery and others. Who, in particular, have you enjoyed working with and why?

As a “gun for hire” it’s really not in my best interest to choose favorites. But I will! Roseanne will always hold a special place in my heart. I have so much respect for her, especially after working for some people who are one way in public and quite the opposite in private. For having the reputation of being a difficult person to work with, Roseanne is the most supportive and nurturing big star I’ve met. When I opened for her on tour she genuinely wanted me to do well. And when I did, she didn’t resent it or feel threatened. And why should she? But some legends actually do. Roseanne is very maternal and very brilliant. I love her. People often ask me, “Is she nice or is she bitch?” and I always answer, “She’s a real nice bitch!” I don’t want to blow her cover, you know?

I also adore Kate Flannery, who most people probably know best as the messy drunk always flashing her tits, Meredith, from “The Office.” We’re old friends and we did “Valley of the Dolls” together every night, twice on Wednesdays and Sundays, Off-Broadway in New York. She played Neely and I played Helen. She ripped my wig off and flushed it down the toilet night after night and, let me tell you, that makes for some serious real girl/drag queen bonding!

And I have to talk about Ross [Mathews]. Working with him, all day every day, on his show “Hello Ross” has been so much fun I almost feel guilty for getting paid. Almost. The funnest part of working with him is sitting in a room and getting all the politically incorrect, you-will-burn-in-hell-for-that joke stuff out of our systems before moving onto the stuff we can actually show on TV. He’s a total doll and beyond supportive. And I am so proud that I finally got him in drag!

What is your take on the “T Word” controversy (the use of words like “tranny,” and “she-male” in “RuPaul’s Drag Race” show)?

I get it. If an 8 year-old transgender kid heard that word, said viciously, I would feel horrible. But we are talking about adults, not only in adult situations, but usually in adult shows. It’s being used within the confines of a TV or cabaret show, not by someone at the DMV: “Okay tranny, you’re next!” As an artist, I want to be able to express myself. Don’t tell me what words I can and cannot use. It infuriates me. You cannot force people to respect, accept or embrace you. If some toothless hillbilly swinging a baseball bat is saying it, then it’s hate speech. If it’s a man in a dress with way too much makeup on, then it’s a joke. Get over it. There are gray areas and I know it takes intelligence and energy to deal with them, but do it.

”And The Beat Goes On” celebrates a quarter century of your drag persona. How has drag changed over the years?

Not to bash “Drag Race,” but drag used to be dangerous and offensive and underground, but now it’s mainstream. I see girls who have done shows for a few years and lasted only a few episodes on “Drag Race” being called “legendary.” Queen, please. I have been doing drag longer then you’ve been alive! I have forgotten more than you’ll ever know. Lady Bunny and I have discussed how difficult it is with close to 100 “Drag Race” losers—and I don’t mean that in a bad way—they didn’t fucking win!—floating around, taking jobs at bargain basement prices to extend their 15 minutes of fame. For many of them, their idea of a “show” is one or two lip-synced numbers, but because they were on TV, they pack the clubs. It’s so hard being more talented than famous. But I’m not bitter.

Yes, come to my fucking show.

”AND THE BEAT GOES ON,” starring JACKIE BEAT, takes place on Saturday, July 19, at 8pm at the Renberg Theatre at the Los Angeles LGBT Center’s Village at Ed Gould Plaza on 1125 N. McCadden Place, in Los Angeles (one block east of Highland, just north of Santa Monica Blvd). For tickets visit jackiebeat.eventbrite.com or call 323-860-7300