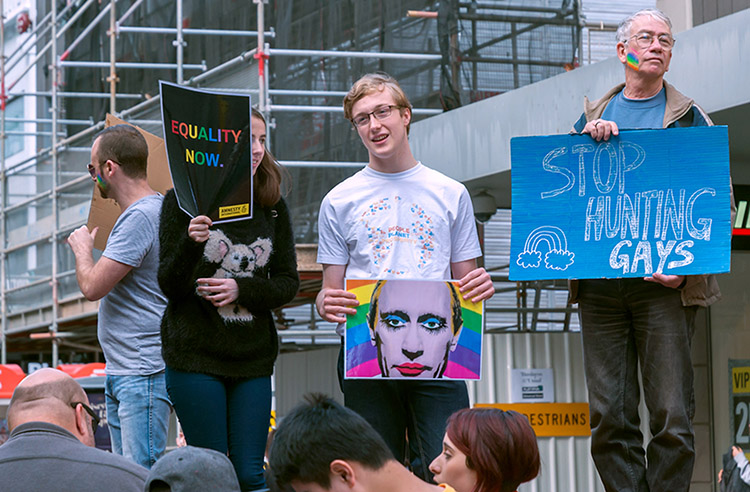 From Russia Without Love

Russia’s “gay propaganda” law is discriminatory and encourages homophobia, the European Court of Human Rights has ruled, reports the BBC.

The Strasbourg judges said Russia had discriminated against three gay rights activists who opposed the law. It was adopted in 2013, banning “promotion of homosexuality” among people under 18.

The law “reinforced stigma and prejudice and encouraged homophobia.” the ruling said.

Under the law, private individuals deemed to be promoting “homosexual behaviour among minors” face fines of up to 5,000 rubles ($85), while officials risk paying 10 times that amount. Businesses and schools can be fined up to 500,000 rubles.

Homosexuality was decriminalized in Russia in 1993, but anti-gay prejudice is rife, reports the BBC.

Critics see the propaganda law as part of a state campaign to marginalize LGBT activists, whose work includes dissemination of sexual health advice.

The Strasbourg court said the fines imposed on three Russian gay rights activists violated Article 10 (freedom of expression) and Article 14 (prohibition of discrimination) of the European Convention on Human Rights.

According to the court, the legislation aimed at curbing promotion of homosexuality was “not clearly defined” and was implemented in an arbitrary way. It “served no legitimate public interest,” the court said.

Russia’s justice ministry says it will appeal, arguing that the law is aimed “exclusively at protecting the morals and health of children.”

The court rejected the Russian government’s claim that such a law was needed to protect morality.

It found that the government had “failed to demonstrate how freedom of expression on LGBT issues would devalue or otherwise adversely affect actual and existing ‘traditional families’ or would compromise their future.”

Such laws, the judges said, “embodied a predisposed bias on the part of a heterosexual majority against a homosexual minority.”

Russian President Vladimir Putin and his supporters have often sought to portray Western Europe as dangerously hedonistic, creating the epithet “gay-ropa” as a blanket term for the region.

They have portrayed efforts by Western organizations to fight discrimination and promote tolerance in former Soviet countries such as Moldova, Georgia, and Ukraine as attempts to undermine “family values.”

Russian and international activists have sharply criticized the Russian government in recent weeks over its failure to investigate seriously allegations that gay men were being persecuted, tortured, and even murdered in the North Caucasus republic of Chechnya because of their sexual orientation.

The anti gay sentiment in the former Soviet Union has emboldened homophobes in various Russian cities. A small but growing chain of throwback shops in Russia recently gained notoriety because each of its dozen or so outlets prominently displayed a crudely homophobic sign in the window declaring, “No pederasts allowed.”

Now, one branch has gone a step further. Local media say the “Bread And Salt” shop in the central city of Kirov is selling hand-carved wooden signs with the slogan for 2,000 rubles ($35).