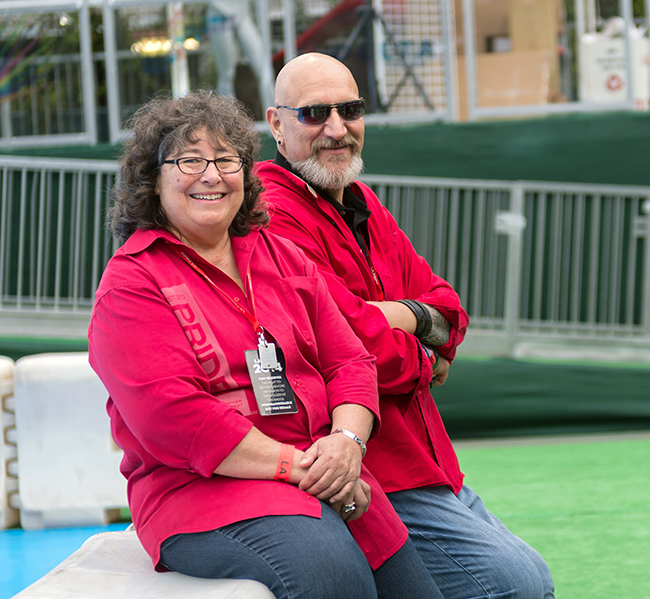 CSW Co-Presidents Patti DiLuigi and Steve Ganzell on how Pride has changed over the years, the struggles facing the transgender community and “putting the sex back in homosexual.”

In 1969, our brothers and sisters in New York City stood up for equality at the infamous Stonewall Inn on Christopher Street. This passionate outburst launched the larger movement celebrating the LGBTQ community and prompted local leaders Morris Kight and Reverends Troy Perry and Bob Humphries to unite the LA community and produce LA PRIDE, in 1970, the first LGBTQ Pride Parade in the world, thereby creating Christopher Street West (CSW).

CSW is the nonprofit organization that produces the LA PRIDE celebration and is governed by an unpaid, professional volunteer Board of Directors, assisted by volunteer committee members, numerous administrative and event volunteers, and a few paid seasonal consultants and staff.

Over the years the nature of the celebration has changed, says Co-President Patti DiLuigi in an interview with THE FIGHT. “In the beginning it was more of a statement, the TLGB community came together to seek other people in their community,” states DiLuigi. “Now it is more of a celebration. While our struggle for rights and against hatred is not over—it definitely has come a long way.”

On a personal level, reveals DiLuigi, her involvement with the organization has broadened her community horizons. “I never had any interaction with the transgender community and the leather community. I never really knew anything about their way of life, the everyday struggles and prejudice they faced. I have gotten to know more about these two communities and I feel I am a better person because of it.”

One of the topics CSW is focusing on this year is PrEP, which stands for Pre-Exposure Prophylaxis. The goal of PrEP is to prevent HIV infection from taking hold if you are exposed to the virus. This is done by taking one pill every day.

“The idea that we might just be living in a time when sero-conversion would end is really significant. It certainly is cause for a celebration and we just happen to be having one,” says Co-President Steve Ganzell in an interview with THE FIGHT.

“It is also an opportunity to provide folks with information so that they can understand some of the things that are being said about this issue… I have some really strong feelings about this but overriding all the other feelings is the feeling of hope,” says Ganzell.

If you’re not familiar with the area—check the banners throughout the festival to find the location.