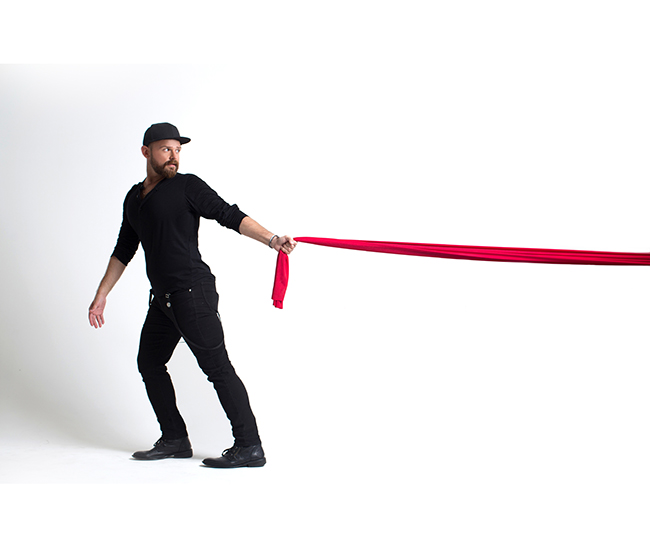 Critically acclaimed Palm Springs Pride headliner Aiden James on playing live in L.A., natural disasters and why an artists’ sexuality should be secondary to their art.

Scruffy, adorable, with a luminous presence and a voice as warm and clear as a bell—Aiden James stands out from the crowd. There is the hopeful eagerness of the true romantic about him, underlined by vulnerability that inspires a protective impulse, but his body possesses a compact power and unexpected grace.

Not to mention a powerful sense of determination.

The younger of two children in a struggling, working-class family, (“We were so poor growing up I was always worried that our pieced together car was gonna blow up,” he recently confessed on Twitter), James grew up in Aston, PA, a small, lower middle-class community on the outskirts of Philadelphia where he once told an interviewer “becoming something other than ordinary was not celebrated or encouraged.”

“I learned early on in my career that in order to make a living in the music industry I’d need to get out of Philly… That pushed me to start touring early on. There isn’t really a music scene here and you certainly can’t make a living just playing your hometown. I love touring and playing live. If anything I believe that has influenced my life more than Philadelphia itself.”

In fact one is much more likely to find James on the road than at his home in Philadelphia’s historic Rittenhouse Square. He is constantly on tour, playing 50-80 shows a year to packed houses from Provincetown to the Hotel Cafe here in Los Angeles.

“I love playing at that club, it’s shiny and has a great intimate experience for the listener. Strangely enough something always goes awry when I play there, natural disasters for instance—in March there was an earthquake and before sound check the front room had a pipe leak pooling water everywhere.” But despite the occasional performance related hiccup, James clearly has a very strong connection to the City of Angels.

L.A. not only consistently turns out some of his biggest crowds (“Kinda floored about that,” he humbly confides.) it is also the subject of one of James’s most popular songs, “Winter in Los Angeles,” a bittersweet portrait of December in the City of Angels. It is James at his best, employing his ample storytelling skills to paint a lyrical picture of the displacement shared by many fledgling Angelenos.

Mastery Of His Craft

James graces the Golden State once again on November 9 for Palm Springs Pride. Those who have never seen him perform might expect to be treated to a level of quality not always encountered at LGBT festivals.

“I never use a prerecorded track, ever; I’ve found many acts at Prides do. Everything that the audience hears I’m performing live, playing guitars, my mini iPhone keyboard, engaging effects on the fly—delays, double or harmonies to my vocal—or hitting my synthesizer for a song. I have a pretty dynamic sound that isn’t just a guy with a guitar… I design and mix my own sound creating a “scape” for the listener. I started doing that about 2 years ago after getting some really bad sound-men that would just wanna not pay attention to the board or were just drunk. So I took control of my sound because I wanted to create a congruent experience for the listener and represent myself the best I know how. Big label acts do this also on tour, but they have a team of people doing it for them at the board. I do it by myself with a series of pedals at my feet.”

Pride-goers will also get to hear James’s new single, “Last Reminder,” a sweeping and urgent tune that speaks to James’ mastery of his craft, both instrumentally and as a producer—and the influence of one particular artist.

“I’m a big Imogen Heap fan. She writes, engineers, produces and mixes her own music and can slay it live. I resonate with her because I also write, engineer, produce, perform and mix my records.”

Another important influence for James is Whitney Houston, whose death had a profound impact—not only did they share a birthday, but James had a special connection to her hit “I Wanna Dance with Somebody,” dating back to his earliest years. “When I was young I spent a lot of time in my aunt’s hair shop. It was like my daycare I suppose… The shop radio was always on and when this one song would come on I would grab a hair brush, run to the back where the shampoo bowls were and sing my heart out along with this tune, putting on a show for all the old ladies. Flash-forward the night of the Grammys, I was driving back to Philadelphia to do a live radio stop on 88.5 WXPN FM / NPR and got news of her passing. It was real to me because I had an attachment to the song and this certain diva. That night on the radio I did this song live and got a huge response.” James recorded the cover and released it on the day they share—it quickly became James’s most popular song on iTunes

Growing up, James had no formal musical training beyond a brief stint in chorus and a Muppet Babies keyboard he had when he was very young. Now James plays 11 instruments – all self taught – and he has recorded and released three studio albums on his own label, Songster Sounds.

The third album, “Trouble with This,” is explicitly pop with some country elements but almost none of the folk that heralded James’ early career. It overflows with optimism right from the opening track; “Best Shot” vibrates with the eager excitement born of fresh possibilities; “Hurry Hurry” thrums with breathless anticipation for a lover; and “On My Sleeve” is the wistful confession of an earnest lover of love.

It was 100% fan funded and debuted at #28 on iTunes, a victory-James expressed in a subsequent interview-shared by the whole LGBT community. “I feel that I won that day. It kinda gave hate a really big slap in the face and I think we all won that day.”

Yet at the same time, James feels that an artists’ sexuality should be secondary to their art. “It’s important to be open and honest about who you are in all aspects of your life. That’s how you live as an authentic person but I feel people dwell on that fact when it’s sort of just a passing thought for me. ‘Oh gay? Cool. Okay. what else?’ It’s sometimes exhausting that the word ‘out’ or ‘gay’ needs to be in front of an artist/performer/musician. Just let the songs stand for themselves.”

James reveals that his new single “Last Reminder,” which he will be performing at Palm Springs Pride, was inspired by a random visit to the laundromat. “I started writing this song one day while at the laundromat waiting for my clothes to dry. I noticed a lost & found flyer seeking the return of an item holding extreme sentimental value. So much in fact, they’d pay to get it back… I put myself in this persons situation and actually saw a music video playing in my head while improvising the melody into my phone’s voice recorder.”

“Last Reminder” is available on iTunes. And be sure to see Aiden James live, Sunday November 9, 12:45 pm on the US Bank Stage at Palm Springs Pride.

“I started writing this song one day while at the laundromat waiting for my clothes to dry. I noticed a lost & found flyer seeking the return of an item holding extreme sentimental value. so much in fact, they’d pay to get it back… I put myself in this persons situation and actually saw a music video playing in my head while improvising the melody into my phones voice recorder.”