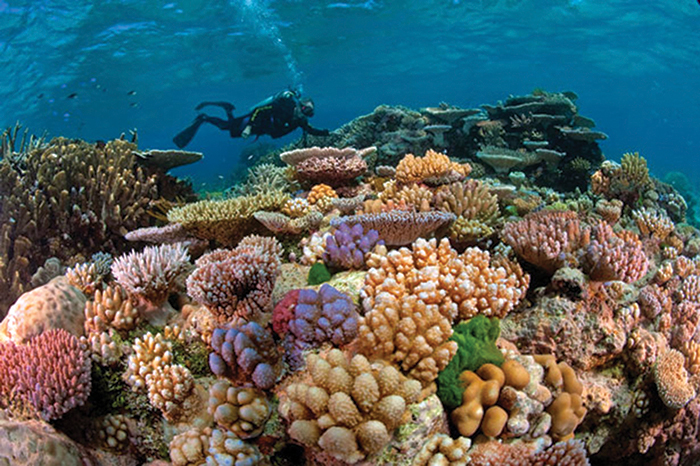 The proteins were found in a feathery coral collected in waters off Australia’s northern coast.

> Researchers have discovered a new class of proteins capable of blocking the HIV virus from penetrating T-cells, raising hope that the proteins could be adapted for use in gels or sexual lubricants to provide a potent barrier against HIV infection, reports Science Daily at sciencedaily.com.

The proteins, called cnidarins, were found in a feathery coral collected in waters off Australia’s northern coast. Researchers zeroed in on the proteins after screening thousands of natural product extracts in a biorepository maintained by the National Cancer Institute.

“It’s always thrilling when you find a brand-new protein that nobody else has ever seen before,” said senior investigator Barry O’Keefe, Ph.D., deputy chief of the Molecular Targets Laboratory at the National Cancer Institute’s Center for Cancer Research. “And the fact that this protein appears to block HIV infection — and to do it in a completely new way — makes this truly exciting.”

“When developing new drugs, we’re always concerned about the possibility of undermining existing successful treatments by encouraging drug resistance in the virus,” said O’Keefe. “But even if the virus became resistant to these proteins, it would likely still be sensitive to all of the therapeutic options that are currently available.”

The research team identified and purified the cnidarin proteins, then tested their activity against laboratory strains of HIV. The proteins proved astonishingly potent, capable of blocking HIV at concentrations of a billionth of a gram by preventing the first step in HIV transmission, in which the virus must enter a type of immune cell known as the T-cell.

“We found that cnidarins bind to the virus and prevent it from fusing with the T-cell membrane,” said Ramessar. “This is completely different from what we’ve seen with other proteins, so we think the cnidarin proteins have a unique mechanism of action.”

The next step is to refine methods for generating cnidarins in larger quantities so the proteins can be tested further to identify potential side effects or activity against other viruses.

The proteins proved astonishingly potent, capable of blocking HIV at concentrations of a billionth of a gram.