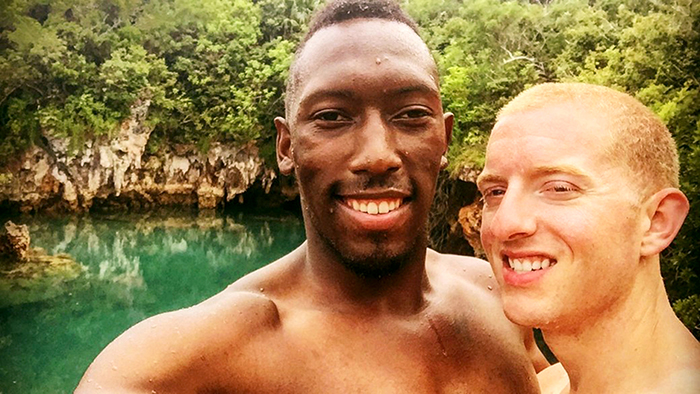 Winston Godwin (L) and Greg DeRoche (R), a Bermudian-Canadian couple, challenged the Bermuda Supreme Court and won the right to marry on the island in May 2017, before the new legislation repealed same-sex marriage.

It’s tough to focus on LGBT news when our country is incarcerating children and perhaps permanently removing them from their families. Readers, we have a monster in the White House. And his Republican colleagues are not much better, furiously grasping for political cover without any attempt to find a solution that could garner 60 votes in the Senate. Spineless.

Oh, I see that Trump is going to sign something to mitigate the situation, but I will continue my rant anyway. I’ll believe it when I see it.

Have any of you ever taken care of a toddler? Not your own child, but a nephew or niece, or in my case, a grandchild? Everything’s fine for several hours until the kid starts wondering where Mommy and Daddy may have disappeared to and when or if they might return. Then comes a period of tension when the strategy is to distract with shiny objects, candy or screen time, usually in violation of parental regulations. If you’re lucky, you make it to bedtime. If you’ve mistimed the evening, get ready for the sudden crying and screaming, the fear that somehow the world will never be made right. Not even Uncle Tim or Grand Ann can calm a terrified child of a tender age. The notion that hundreds of these traumas have been taking place is unfathomable.

As for the parents, many of whom are deported by force back to Central America without their children, what kind of torture is this? What did they do to deserve it? Trek through miles of dangerous country to reach the U.S. and ask for asylum? It would be kinder if we just broke their arms without anesthesia.

Okay. Back to our main topic. You’ve already read the mixed reviews of Justice Anthony Kennedy’s opinion in Masterpiece Cakeshop v Colorado. Yes, we basically won that case, even though the antigay baker, Jack Phillips, got a special pass from the High Court.

As proof, consider a ruling from an Arizona appellate court, which was waiting for Masterpiece before ruling on the case of an antigay stationary store that wanted to reject gay wedding clients. About a week after the June 4 Masterpiece Cakeshop decision, the Arizona court ruled against the store, quoting Kennedy’s opinion and upholding the primacy of the Phoenix civil rights ordinance. The bottom line is that no, you cannot use the First Amendment to avoid general anti-discrimination laws, whether they are protecting racial minorities or the LGBT community.

So that’s good. But I’m still afraid that conservative courts can and will twist the Masterpiece ruling into an antigay weapon. Meanwhile, the Court has yet to take action on a petition from Washington-based Arlene’s Flowers, another business that declined to do business with two gay men who were getting married. Arlene’s Flowers was sued by the state of Washington, and lost at the state supreme court. We expected the Masterpiece opinion to settle this case as well, but since that decision was somewhat convoluted, who knows whether or not the Court will accept review of this case?

In other High Court news, we have another Title VII workplace discrimination suit on the Supreme Court’s list of petitions for review. You remember that the justices declined to hear the appeal of a gay rights Title VII loss at the U.S. Court of Appeals for the Eleventh Circuit. But in the Zarda case here, we won before the full bench of the U.S. Court of Appeals for the Second Circuit, so the High Court would normally accept review in order to clarify federal law.

At issue is whether or not Title VII’s ban on sex discrimination in the workplace inherently includes a ban on sexual orientation discrimination. Over a half century and change, courts have interpreted the scope of Title VII in thousands of cases, leading for example, to the conclusion that the law bans discrimination based on gender stereotyping. The idea that gay bias violates Title VII is increasingly accepted, but you know who has the final word? The High Court of course.

And not to belabor this, but if the Court were to rule in our favor, that would mean that gay bias is illegal, not just in the workplace under Title VII, but throughout federal law wherever sex bias is prohibited. As such, Zarda could be the most important legal battle in the history of gay civil rights.

Let’s see. There’s a ton of legal news as is often the case, but do you need all the details? We got yet another ruling in our favor in one of the transgender military lawsuits. The Canadian High Court ruled against a proposed law school that planned to impose some kind of heterosexual mandate. A lesbian lost a Title VII case in Kentucky. Another Title VII case continues before the U.S. Court of Appeals for the Eighth Circuit. Oh, and the Filipino Supreme Court is reviewing marriage equality, which has the support of murderous dictator Rodrigo Duterte. Really?

Speaking of marriage, you should know that the Bermuda Supreme Court reinstated same-sex marriage rights. The High Court had already ruled in favor of equality once, but the island’s parliament had replaced marriage with a domestic partner scheme. That maneuver was challenged in court, and the judges reversed it.

Okay then! I’m assuming there’s no chance of Parliament trying their little game a second time, and I suppose this means we can go back to booking vacations in the fussy little British outpost, where we can rent dangerous mopeds and crash them together with our same-sex spouses.

And speaking of the Brits, did you see that the Queen’s cousin, Lord Ivar Mountbatten, was planning on marrying his partner, James Coyle, late June? I suppose the men will already be married by the time you read this issue. Mountbatten’s ex-wife Pamela was to give him away in a ceremony that marked, in his words, “an acceptance of this great love.” (Cue: “A Time For Us”).