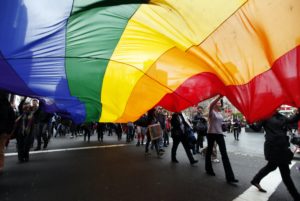 Despite the protestations of organizations like GOProud, the Log Cabin Republicans, and (*sigh*) “Twinks for Trump,” and that one time the now-President said kind-of-nice things about LGBTQs on the campaign trail, the Trump Administration’s hostility toward the queer communities has been irrefutable for some time now. Two new key decisions by the Administration that serve to weaken the legal standing of LGBTQ individuals in a number of areas and render us scientifically invisible only underscore this hostility.

The first attack comes in the form of an executive order signed by Donald Trump on Monday revoking the Fair Pay and Safe Workplaces order, an Obama-era regulation requiring companies receiving big government contracts to demonstrate three years of compliance with several federal laws protecting sexual orientation, gender expression and HIV status. Trump’s EO doesn’t end those protections it does make them almost impossible to enforce. It also sends a message, according to Lambda Legal CEO Rachel B. Tiven, that “the government condones discrimination. Scrapping an order like this one is different than not adopting one.”

The second—and perhaps more insidious—attack on the queer communities is a decision by the Trump Administration not to count LGBTQs in the 2020 Census. The move to include questions about sexual orientation and gender identity have long been pushed by LGBTQ movement leaders and politicians, and last year their inclusion was formally requested by several Federal agencies. Tuesday morning hopes that these efforts had paid off were first raised then dashed when the Census Bureau released its report on planned subjects for the survey to Congress which included sexual orientation and gender identity, only to have a “corrected” census plan released a few hours later omitting LGBTs from the survey.

Practically speaking, not counting gender non-conformists and same-sex lovers on the census rolls leaves us at a dramatic disadvantage scientifically. Without knowing how many gays, lesbians, transfolk, bisexuals and other queerfolk there are (and where they are) it is very difficult to know the impact of policy changes on our communities. But more broadly, this inclusion before exclusion tells us that the Trump administration doesn’t see the LGBTQ communities as legitimate threads in the fabric of the Republic.