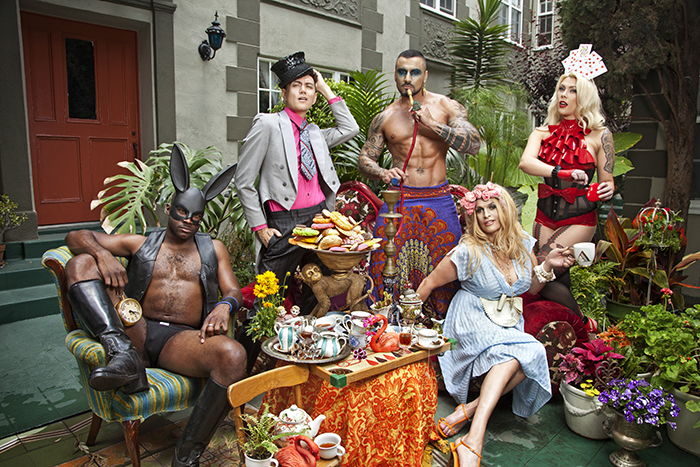 Through most of its history, Lewis Carroll’s “Alice in Wonderland” has been described as a “coming of age” story about a young girl trying to figure out who she really is.

As Alice travels through Wonderland, she is constantly bombarded by personal changes that challenge her perception of herself, not unlike the changes many of us in the LGBTQ community go through at different stages of our lives.

With that theme in mind—THE FIGHT talked to a few unique individuals about growing up in the LGBTQ community and
finding one’s identity. 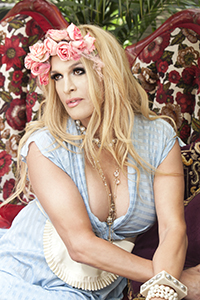 In many ways, reveals transgender community activist Desiree Jade Sol, the connection to  Alice in Wonderland, the character she portrays in THE FIGHT photo shoot, is not very far from her own reality.

“I am always amazed and in awe of what drives people.  Whether it is leather, sports, singing, makeup, comedy, acting, fetishes, photography, whatever. When people find that thing that makes their light shine and their soul sing—I find it wonderful.  I get enthralled with them as they light up and show their pride and commitment to whatever it may be.  So yes, I am  Alice—always in wonderment.”

Sol serves on the City of West Hollywood’s Public Safety Commission and was a member of the City’s Transgender Advisory Board. She graduated from the Los Angeles Police Department’s LGBT Community Police Academy and was the first female West Hollywood Cheerleader.

She has served as sub-committee chair on the City of Los Angeles Human Relations Commissions Transgender Working Group, held the office of Private Secretary of The Royal Court of West Hollywood, and was a graduate of the City of West Hollywood’s Community Through Engagement Academy.

“Bringing awareness to the injustices that exist is essential. I believe in every opportunity to march, protest, and rally. Grass roots is everything! It is where you get your energy to move ahead and discover future leaders. I believe that participating and taking risks creates opportunity for change.”

“Each and every one of us is affected by injustice,” states Sol. “How can you simply look the other way when there are so many people discriminated against in healthcare, housing, and employment? I simply can’t.”

“Equal rights for all is about treating each person you come in contact with respect and dignity in the hopes that they do the same,” says Sol. “If you can change one person’s way of thinking about humanity as a whole then you have accomplished something.” 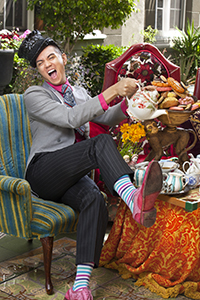 A Cute Pair Of Heels
Karl Westerberg, aka Manila Luzon

Karl Westerberg, better know as Manila Luzon from the third season of RuPaul’s Drag Race, tells THE FIGHT that he “always loved dressing up. I love the theatrics of costumes how I can become a different version of myself by how I dress. And I always knew clothes made for women were way more fabulous than clothes fit men. And it was one night when I was 12 or 13 my mother asked if I wanted to watch a foreign movie with her, Priscilla Queen of the Desert… just as long as I didn’t tell my classmates! Thanks mom for unknowingly introducing me to my future!”

Westerberg grew up in Minnesota “in a very regular suburban town.”

“Early on,” reveals Westerberg “I wanted to identify as bi hoping I could live a more ‘normal’ life, but nope, I’m a big ole homosexual.”

In many ways, says Westerberg, his appearance on Drag Race changed his life. “Suddenly I was given the chance to really focus all my creativity into my drag for the world to enjoy! I quit my job as a graphic designer and stopped using my talent for others and used it to fully realize my own vision of what I wanted to create for my drag persona.”

Regarding his relationship status Westerberg reveals that he is “dating a wonderful man named Michael who I love more than anyone! Healthy relationships—especially gay relationships—are hard work. We are constantly communicating with each other to strengthen our love each day. It’s the most rewarding thing I’ve ever done.”

“When I came out years ago I had a moment where I thought I had to give up on the idea of marriage,” says  Westerberg. “But I’m  influenced by my late grandparents’ life long marriage; I believe that sharing your whole life with another person and loving them unconditionally can be worth it… Besides, I already have ideas of what my wedding dress will look like!”

When asked what would be one piece of advice he would give his 12-year-old self if he could go back in time—Westerberg replied: “Skip the girlfriends in high school and come out already! And find a cute pair of heels.” 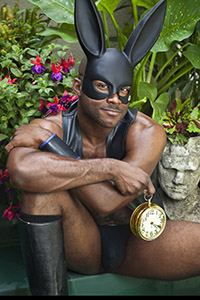 Five years ago, at the age of 19, recording artist Evan Levi Allen realized he was part of the leather / fetish community. “I went to a wonderful leather bar in Philadelphia, PA—The Bike Stop. That place is three floors of hot, dripping masculinity & positivity. The friends I made there helped me shape who I am, both in and out of cowskin. I befriended a lot of the Keystone Boys of Leather, who took time to speak with me about my own Leather journey. I definitely realized then that I was a Leatherman.”

When asked if he ever feels disenfranchised from the LGBTQ community Allen responds: “Absolutely!”

“More generically, the LGBTQ community suffers from a lack of diversity—pertaining to race, gender, and orientation. I’m a bisexual African-American, consequently, I defy a lot of those stereotypes, and have been insulted for my insistence that I still am a leatherman. One guy on Scruff was even so bold as to scoff and tell me, “black men can’t be Masters.” Now, most people would say this is an isolated case, but I disagree. I drove across the country when I moved to L.A., and stopped in a different city every night. I took this as an opportunity to see what different queer communities were like, through the lenses of Grindr, Scruff, and Growlr. I was called a nigger on more than one occasion, while in America’s breadbasket.”

Allen is currently affiliated with ONYX SoCalSouthwest—a fraternal organization formed and operated by men of color who enjoy the leather lifestyle. “Currently, I am a pledge, which means I’ll be seeking full membership when my class crosses in a few months. We raise money for charitable organizations serving underrepresented portions of the LGBTQ community. We also raise awareness about the tenets of ‘safe, sane, and consensual’ leather participation among the greater queer community.”

As a recording artist—Allen performs as “jACE the Caveat.”

“I’m working on an album called ‘Leather,’” reveals Allen. “There’s no release date yet, but the single ‘4am’, is already on iTunes & Google Music. The song is about having fun, being yourself, and making the most of those twilight hours.” 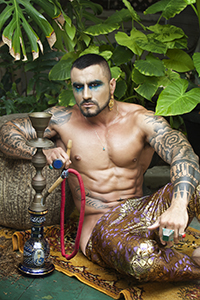 Efren Chacon, better known as Effy among friends, moved to the USA from Mexico in 1994, as a teenager. “It was difficult for me,” he reveals, “because when I came to this country I didn’t know how to read or write in English—or in Spanish. I never had the opportunity to go to school in Mexico or had any type of education so having to learn how to speak and write English and Spanish at the age of 17 was super hard.”

Chacon overcame the language obstacles and went on to graduate from Seattle Central Community College, obtaining an AA degree on Social work.

“I love my job,”says Chacon. “I feel very blessed and lucky to be working for one of the most amazing medical practices here in L.A., that has given me the opportunity to learn so much in the medical field. I work with a very professional, educated and amazing team starting with my amazing boss Dr. Anthony Mills.”

Chacon, who is currently single, says that he realized he was gay at the age of 18 “when I met my first boyfriend at the time, I was still dating women.”

Today, says Chacon, he feels “very lucky to have a good group of friends that care and do a lot for our community here in L.A. I look up to people who go out of their way to help each other, care and show that no matter how things are in our life sometimes—we always have someone there to give us a hand.”

When asked what would be one piece of advice he would give his 12-year-old self if he could go back in time—Chacon replied: “It would be to never feel less than anybody ever, never forget to take care of myself first and to never stop chasing my dreams.” 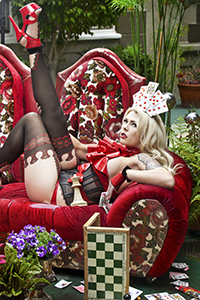 Within the LGBTQ spectrum Bathory says that she is “a big ole queer, with mostly lesbian tendencies. If we wanted to get into labels—I would be a femme identified pansexual vagina-loving dominant. Since that’s a mouthful at parties, queer suits me just fine.”

Bathory, sober since August 18, 2010, says that “every day in sobriety has been an absolute miracle.”

“When I got sober” reveals Bathory, “I was a broken, useless, shell of a human being. My sobriety has given me everything good that I am today. An unexpected gift in sobriety is the ability to relearn who I really am with out any substances, and learn from people I respect and admire.

My sponsor is a leather man who teaches me how to bring my spirituality into everything, including my sex life. I’ve also learned how to be an active member of society in the rooms of my program. I went from a high school dropout to heading towards medical school in a couple of years. If you are reading this, and you are struggling with addiction—in any form—please know that recovery is always an option, and you don’t have to go through it alone.”

Bathory, who identifies and works as a Dom, explains that “there are two different sides of my dominance in every day life. In my personal life, I live in a 24/7 dominant/submissive relationship with my female partner. Boundaries are incredibly clear, and at the simplest level she is in service to all of my needs at all times. The reality of the situation is that she is the one in control, she gets ultimate authority when putting new protocols into place, and has the ability to step out of our relationship and be an equal at any time she pleases.”

“In my professional life,” explains Bathory “it’s not all about my needs all the time, it’s about coming together with a client to see where your fetishes overlap and build a mutually beneficial scene for both parties. It’s an incredibly intimate role to be in with another human being—I get to hear about things people haven’t told their partners, or even therapists. I’m really grateful to be in a position, and I get to help a lot of people work out their sexuality and have fun doing it.”