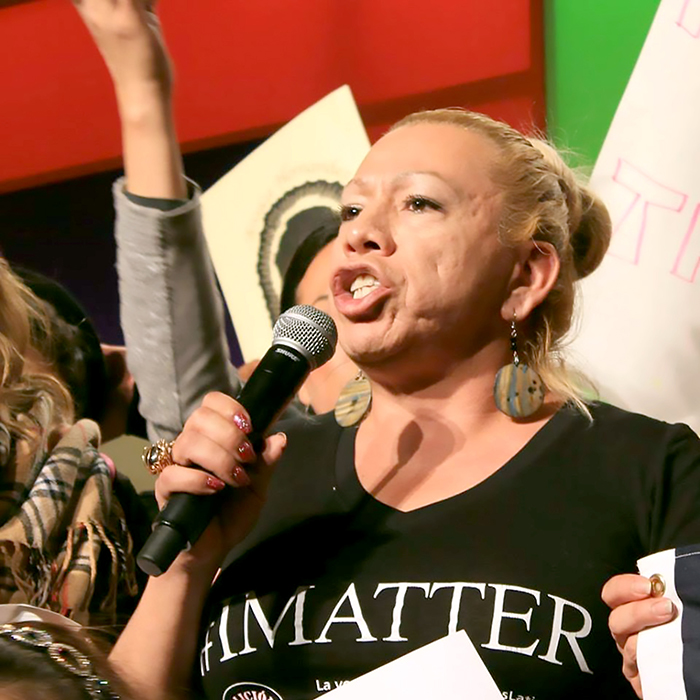 The Los Angeles Trans community took the streets of Mid-town L.A. on July 24, to protest the recent brutal murders of two trans women during the course of one week. The victims are 66 year-old, KC Haggard of Fresno, Calif. and 25 year-old, India Clark of Tampa, Fla.

Neither woman’s murder is being investigated by local police as a hate crime. The community is demanding justice for the victims and full equality for all trans people.

Over 100 activists stopped traffic to demand dignity, equality and called for an end to anti-trans bigotry and violence. One of the lead organizers of the protest was Bamby Salcedo, President of the TransLatin@ Coalition.

According to Apple Model Management, in the past years transgender people have become more and more accepted in many areas of music, entertainment, fashion and commercial advertising due to big names like Aderet, Alexandra Billings, Lavern Cox, Isis King, Lea T. and Andrej Pejic, to name a few. As a result, Apple Model Management has opened the first of its kind, full transgender model division, with the goal of giving transgender models an international stage to work worldwide and to globally represent Thailand and South East Asia.

“We see trans individuals as beautiful,” LA director Cecilio Asuncion told the Advocate. “It’s never a question of if they are women or men, it’s about their passion and commitment to being the best possible models they can be.”

The Los Angeles LGBT Center is Southern California’s largest and most comprehensive provider of healthcare for transgender and gender non-conforming people.

The warm and welcoming team of providers in their Transgender Health Program offer:

Hormone therapy, including education and management.

You have the benefit of knowing that their providers work as one team and under one roof, so if you need counseling, your doctor can consult with a Center therapist about your situation, just as they can consult with Center pharmacists, nutritionists, and other relevant staff about your unique needs.

Their caseworkers can help you determine eligibility for medical and drug assistance programs if you lack insurance or have limited means.

Struggling with your gender identity/expression? Struggling with how others respond to you? No matter where you fall on the gender continuum, the Center’s transgender therapy groups can help you.

These two groups (transgender male to female and transgender female to male) are for individuals who identify at various points along the gender spectrum (e.g. transgender, gender-queer, gender nonconforming). They offer a safe and therapeutic space where members can process their thoughts and feelings about relevant issues associated with gender.

Some examples of discussion topics can include exploration of “coming out” challenges, exploring inquiries related to the process of transitioning, examining experiences of transphobia, identifying strategies for maintaining safety, and developing an identity-affirming support system.

To schedule an intake meeting, where a counselor will help you determine if the group is right for you, call 323-860-5806.

FTM Alliance of Los Angeles is a community-based organization dedicated to empowering the female-to-male transgender community, and to increasing the visibility and acceptance of transgender men in Southern California.

They provide resources, support, and leadership opportunities to people assigned female at birth or in childhood who no longer feel that label is complete or accurate, as well as their significant others, families, friends, and allies.

Through education, advocacy, and activism, the FTM Alliance of Los Angeles is committed to creating a society where everyone is free to choose and express their own gender.