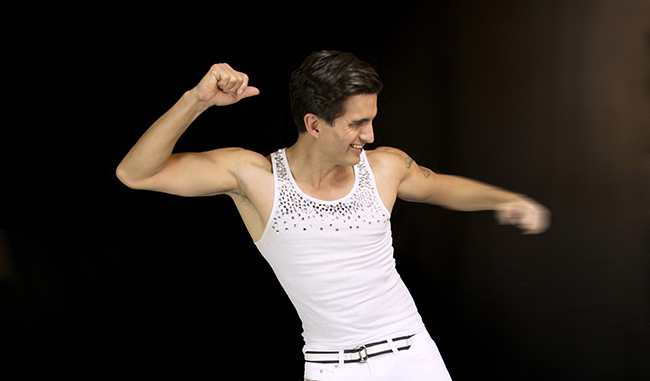 Paulo Murillo on experiencing the White Party, clean and sober: “I was just grateful to be able to hit the dance floor with nothing but H20 in my system. Sounds lame, I know, but the dance floor was ground zero for my drug use.”

I went to Palm Springs for the 25th Anniversary of White Party Weekend last year. What’s the big whoop-whoop about me attending WP, you ask? Well, it’s no big whoop, but I’ve never done a circuit party—especially one that massive-completely clean and sober with the intention of keeping it that way well past the weekend’s Closing Party.

They say that we can do anything we want in sobriety as long as we don’t get loaded over it, and we are willing to pay for the consequences of our doing, but some seasoned sober folks cautioned me to stay away from the big WP. I was asking for it, kinda/sorta like a diabetic has no business being in an ice cream shop, or a married man who goes into a gay bath house thinking he’s only there for an innocent bath… spend time at a carnival long enough, and the chances of taking a jumpy ride are greater than if you steer clear from carnies who make you wanna go bump in the night.

It had been almost 10 years since I attended WP. I was 7 years sober at the time (I recently reached an 8-year milestone thank-you-very-much), so it had been a long time since I last tapped into the part of myself where I schemed and starved extra hard to impress people that I didn’t really like—however, I wasn’t about to phone that shit in. It was a look at me, but don’t look at me moment, where on the one hand I didn’t care what others thought of me, but on the other hand, I didn’t want to give any ghosts from my party past any reason to be like, “Damn, what happened to that tragic bitch?”

I took all precautions necessary.  I went so far as to get a meningitis vaccine and I even got a B vitamin booster shot to avoid getting sick—yet despite all my efforts, sickness is what I got days before the big weekend. I was coughing so hard, my nuts hurt. Some would call my getting sick a “God shot” to slow my roll. I called it annoying as all hell.

My friends and I skipped the underwear party Friday night, because I had no kind of business walking around in my undies with a partner and a dog at home, but we hit up the Splash Pool Party on Saturday, which was actually a lot of fun, despite my being sick. I ran into a lot of sobers working the door, because Jeffrey Sanker is no fool; sobers suit up and show up, we don’t cheat or steal (anymore) and we aim to please to a fault.  Of course, my sober sistas gave me shit when they saw me standing in the VIP line. “Miss, please step aside for a random drug test.” they taunted me. “Pee in a cup bitch, this is not the VIPNP line.”

The pool party was way bigger than I remember it. Mermen swam in the pool. There were live performances and the costumes among my fellow gays were just too many things. And of course, you had the battle of the bulges with guys walking around in swimsuits with built-in contraptions, padding and stitching that pushed their tiny peckers way out to simulate the packaging of some serious heat. It’s was like a stuffed bra, but for your balls. Man, the game ain’t what it used to be.

I had no hidden agendas and/or expectations of what the pool party should offer, which is probably why I had so much fun. I didn’t feel the need to get crazy. I didn’t even strip down to my bathing suit, nor did a dare get in the water, because I’m sorry, the pool was all pretty and blue and the men in it were gorgeous too, but all I could think of was meningitis stew.

I survived the pool party with integrity and my sobriety intact, but the real event and ultimate test was the actual WP, which was every bit as massive and amazing as promised. I’m not going to say that it was drug-infested cesspool, but I can’t pretend that I didn’t encounter some glassy-eyed creatures of the night. It was a little jarring at first. I hadn’t been around that shit for years, but I have no kind of room to throw daggers at my gay tweakers who were on a mean one. I get it—I don’t dig it (anymore), but I can’t judge it. I was just grateful to be able to hit the dance floor with nothing but H20 in my system. Sounds lame, I know, but the dance floor was ground zero for my drug use. I loved dancing from dark past dawn and speed is what got me going. I thought I had lost the ability to lose myself at a club in sobriety, but I danced my ass off at WP/25 all night long—of course, the whole night I could not shake all those times that I used to rip on a 40-plus circuit party queen who I felt had no kind of business polluting a dance floor (moving along).

The White Party T-dance pretty much concluded my White Party experience. I was wrecked. Lack of sleep, being sick and being exposed to the elements of the hot desert sun took its toll, but T-dance was still a remarkable affair. I walked away from those two giant Ferris wheels that evening feeling so damn grateful; we really can do whatever the hell we want in recovery, if we’re willing to put in the work, use our tools and set ourselves up to make the right choices.

My friends and I barely scratched the surface of Jeffrey Sanker’s White Party Weekend last year, which brought in a crowd of over 30,000 attendees—the largest turnout in White Party history. I was there, and I did it all completely clean and sober.