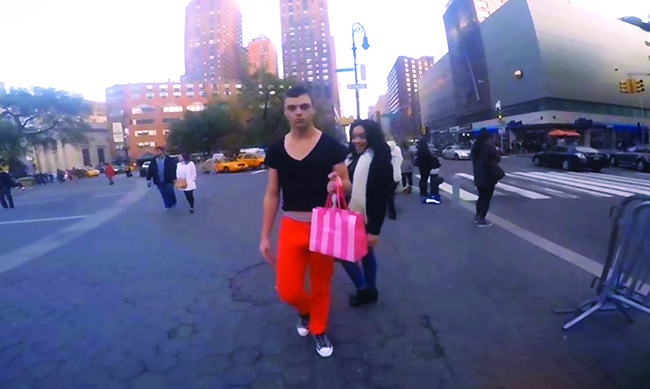 How can we ever win the fight when we’re afraid to put up our dukes and hop in the ring?

Not too long after a viral video showing a woman being aggressively catcalled walking the streets of New York City broke the internet, the gays got a viral video of their very own.

In the video, titled “three hours of walking through New York City as a homosexual,” a man dressed in very tight pants and a belly-exposing shirt walks through NYC carrying a Victoria’s Secret bag perched delicately on his elbow.

In the selectively edited video, he’s followed, made fun of, and even has the f-bomb dropped on him by people on the street, most of whom are black.

Of course, the video spread like wildfire among the LGBT-oriented blogs and websites, and the responses pretty much boiled down to two categories: those recounting similar stories of their own, and those bashing black men who “should know better.”

Very few people questioned the “experiment” or the actor conducting it, which was unfortunate.

As it turns out, the video was click bait by NYC based comedian Dennis Cee, a presumably straight man who runs a wildly successful youtube channel where he shows videos of pranks with titles like “Selfies in the Hood,” a great deal of which show him being aggressively attacked by the black male targets of the pranks. So what we have here is a straight guy trading on gay and racist stereotypes in order to bring views to his page. The sad part is that it worked. The video has 1.5 million views on YouTube, but the success of the story made me ask a very uncomfortable question: are LGBT people becoming too comfortable with being victims?

The fact that this video was taken completely without question as a fact of life for gays in New York City is deeply disturbing and indicative of a victim mindset that is becoming more and more pervasive in the community. When I saw the story of an Ohio State University student that was punched in the eye for kissing his boyfriend in public, I wanted the ending to be different. I wanted to read a story about that student bashing back, about him getting involved in a scuffle with his attacker, about him doing something, anything other than taking his licks and moving on.

Of course, he did something, alright: he posted a photo of his black eye on twitter along with a “note” to his attacker. When that story got a lot of support and retweets, I had to stop myself from screaming “WHY??” “Why are you supporting this victim? When are we going to step up and start FIGHTING BACK?”

Over the past few years, I’ve noticed a distinct shift from out in the open activism to online #hacktivism. This kind of hacktivism revels in the kind of “work” that it takes to create a hashtag, or to comment on an online video, or to retweet a positive “ain’t nobody gonna get me down” message from someone who has been bashed. Are we becoming a community that doesn’t want to do the real work to defend our right to exist?

Is it easier for us to walk the streets of our perspective cities with our head low, hoping

not to get bashed, and being fully prepared to run to the internet or the press if we do? I’m not saying that we should go out looking for a fight, but as a gay person in 2014 we should be vigilant about defending ourselves in every way. Yes, defending ourselves can be done with with magazine covers and red carpets to promote “visibility” and winning high-profile court cases to defend our rights in the eyes of the law. But you know what? Sometimes good old-fashioned street fighting is absolutely necessary when our safety is threatened while trying to live our lives.

When I think of this, I’m reminded of something an old friend of mine used to say when the topic of physical safety came up: “I may not win the fight, but the other person will know that they have been in a fight.”

The question is: how can we ever win the fight when we’re afraid to put up our dukes and hop in the ring?

Is it easier for us to walk the streets of our perspective cities with our head low, hoping not to get bashed, and being fully prepared to run to the internet or the press if we do? I’m not saying that we should go out looking for a fight, but as a gay person in 2014 we should be vigilant about defending ourselves in every way.